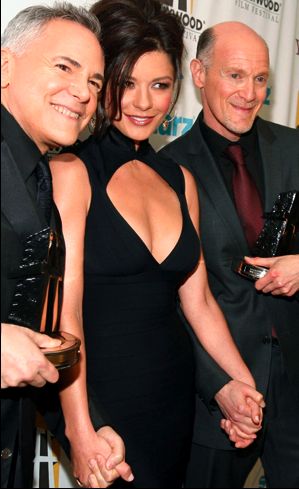 When OUTFest tapped producing partners Neil Meron and Craig Zadan (executive producers of Chicago, 2002 winner of the Best Picture award) to receive the 2012 Legacy Award, nobody could have anticipated the irony of asking Darren Criss -- who had made his Broadway debut in their production of How to Succeed in Business Without Really Trying -- to present the award, because while the Meron/Zadan partnership has always radiated an aura of success, as they tell it, their career has been anything but effortless.

Meron and Zadan's partnership initially took shape in New York City at the Public Theater, where, working for producer Joe Papp, they adopted the legendary producer's forward-looking ethos of color-blind casting and championing minority writers. Papp's early influence on the duo has been reflected in a body of work that reflects America's challenging cultural and ethnic diversity: the first multicultural Cinderella, starring Whitney Houston, Brandy, and Paolo Montalbán; What Makes a Family, starring Brooke Shields and Cherry Jones; and crowd favorites Hairspray and the smash Smash; and of course producing the 2013 Academy Awards.

I recently spoke with Meron and Zadan by phone about the secrets of their artistic success and longevity in a fickle business, the mythic "power gay," and Hollywood's casting couch.

Tomas Mournian: You both started working for Joseph Papp, who produced Larry Kramer's The Normal Heart and championed Michael Bennett (A Chorus Line). Do you view Papp as a straight instigator of gay culture?

Neil Meron: He didn't specifically say, "I'm going to do gay plays." He really looked to the disenfranchised. So the Public Theater wasn't gay-centric so much as it was disenfranchised-centric. Joe was really great at reflecting the world that was right outside the door.

Tomas Mournian: How have you navigated Hollywood, an environment known for its macho behavior and/or casual homophobia?

Craig Zadan: If you are a really talented writer, or a talented director, or talented producer, or whatever, nobody really cares if you're gay or straight.

Tomas Mournian: Right, but what about gay actors?

Craig Zadan: There was always a fear that the female audience that fantasizes about leading men would not want to go see that person. But Neil Patrick Harris, and a huge list of others have come out in the last couple years, have been able to play anything. So the idea of being gay and turning off a straight audience is becoming ludicrous.

Tomas Mournian: What's been the key to a successful partnership in a business not known for longevity?

Neil Meron: When you disagree on some things, and you work it out, and you continue. You let off the pressure cooker of the environment. It's like any relationship.

Tomas Mournian: What is the difference between "healthy fighting" and that oft-used Hollywood phrase "fighting for a project"?

Craig Zadan: For Hairspray it was going back, over and over again. People lose jobs and don't work when the ego gets in the way: :Look, I've earned this, so therefore they should give this to me." We never took the attitude that they owed it to us or we deserved it.

Tomas Mournian: So you would agree with the late Julia Phillips (You'll Never Eat Lunch in this Town Again), who said, "You don't sleep your way to the top, only into the middle"?

Neil Meron: There is that myth in general about Hollywood. And I'm sure the myth is founded in some sort of reality. But have we heard stories? Sure.

Tomas Mournian: What would be the three most important traits for any aspiring "power gay"?

Craig Zadan: I don't understand this. Can you give me an example of what you're talking about?

Tomas Mournian: Richard Zanuck spent 25 years pitching Driving Miss Daisy before he was given a green light. To me that says that patience is an element of power. What are other elements or qualities of power that you would identify?

Neil Meron: I think the question (for both of us) was when you specifically said "power gays." We are members of the entertainment industry and must have the same passion and perseverance and dedication and cleverness as anybody.

Tomas Mournian: But you're receiving the Legacy Award from OUTFest, which is an LGBTQ film organization.

Tomas Mournian: An award that recognizes you're both powerful gay men in the entertainment industry.

Craig Zadan: I think it has to do with perspective. We get up and go to work just like everybody else. We have disappointments, and great things happen, and wonderful, thrilling moments, and we have horrible moments where people are disrespectful and awful to us. We don't see ourselves as being powerful or important in that way, because we have really tough days where we don't feel so important. We feel like every producer out there, struggling and fighting, and working to get their shows, their TV things, their movie things, their everything, made.

Neil Meron: We are also at the mercy of people that say they want to give us the money to do it. I don't think we're completely in control of our destiny.

Tomas Mournian: Ten years in development hell, and Miramax Films is about to give up on Chicago (which grossed over $300 million)... What about you clicked with the project?

Neil Meron: The right DNA. But it's like any other project: It could have gone another way.

Craig Zadan: Rob Marshall. His concept and vision was so right, and so inspiring, and so different from what anyone else tried to do that as a result, it immediately happened and got made.

Tomas Mournian: And after Darren Criss presents you with the Legacy Award, next year you follow in the footsteps of Gower Champion, Stanley Donen, and Quincy Jones and will be producing the biggest show on Earth: the Oscars. How did that happen?

Craig Zadan: Academy president Hawk Koch called and said, "What would you say if we asked you to produce the Oscars this year?" We went, "Really?"

Neil Meron: Like all the other Oscar producers, we're going to make it our own.

Tomas Mournian: Will there be any dancing dwarves?

Craig Zadan: There is no history in our TV or movies of any dancing dwarves.

The OUTFest Legacy Awards will be held Oct. 13 at the Orpheum Theater (842 S. Broadway, Los Angeles, Calif., 90014). For ticket information, click here, and for more information on the event, go to outfest.org/legacy/events.

What Becomes a Hollywood Legend Most? Oscar 2013 Producers Neil Meron and Craig Zadan Talk Money, Sex, and Power
Hollywood Producers Neil Meron And Craig Zadan&#039;s Life In Pictures
1 / 9
Darren Criss Of 'Glee' Presents The Legacy Award To Neil Meron And Craig Zadan
<strong>Craig Zadan:</strong> We're also really thrilled that our friend Darren Criss is going to present us with this award. He starred for us on Broadway in <em>How to Succeed in Business Without Really Trying</em>, so we gave him his chance to be on Broadway and make his Broadway debut. Of all the people that we know, we're thrilled that he's the one who agreed to perform, and sing, and hand us the award. It's going to be an incredible night for us and, hopefully, for everyone in the audience.