Ok, so you're telling me there's a dude named Thanos hunting down the Infinity Stones, a kid who received super powers after a radioactive spider bite, a talking raccoon, and an Asgardian God... but not one brown person that kind of at least vaguely kicks some ass!? Really Marvel? Really Hollywood? Come on! Where are our brown heroes?

Any actor would dream to play the hero who saves the day. As an Indian actor those roles just don't exist. They've been criminally left out of the mainstream - and fine, if not super heroes, then can we at least have a few brown characters that display heroism, leadership, and strength. Anything will do so long as the character exists past the part of a novelty.

We can start small. Like having brown characters whose diverse cultural background adds to their perspective and uniqueness, instead of having it be a device used to make the character quirky and awkward for western sitcoms. This can make it seem as if our perspectives are undervalued, or that our skin is not worthy. Bullshit. Our experiences and perspectives are compelling and authentic.

It's important that we fight to share our stories because these experiences should be a means of connecting and understanding others not just isolating a certain point of view. The media and entertainment cycle heavily informs how we view each other. With a lack of authentic representation within those mediums - people can grow uninformed and volatile opinions of each other, which they take into the real world.Many groups must deal with the repercussions of false representation. People who share my brown complexion in movies are very rarely complex. They're either a geek with bizarre over-the-top traditions or a straight up terrorist.

Growing up, I had no cool role models to look up to, no heroes. Anyone who was capable of saving the day was white. Indian characters were sidekicks, geeks, or nameless goons to be shot by soldiers. White characters always had the answers, lead the adventures, kicked all the ass. It may sound ridiculous, and a part of me believes it is - but understand that if this is the only imagery you see - it's easy to build up a frustration and self-hatred. White becomes dominant, and your skin becomes this hindrance.

Your skin doesn't dictate ambition or desire. Indian kids aren't all shy, nerdy archetypes. We're leaders, we're champions. We want to perform at the height of what this world has to offer, but since we were kids, it was rare to see examples of people who looked like us in those positions. Most brown dudes I've talked to have been called 'Slumdog' or 'Kumar' at one point in their lives. That's a weird thing to have in common with other people. There are so few examples of Indian representation, that those are the only two fleshed out characters that existed in mainstream culture.

I guess if there's a silver lining to any of it, it would be that we were so inadequately represented in entertainment that makes things more difficult for racists to be original. Now, in my twenties, I've of course been on a bit of a journey. A journey of self-love, love and pride in my skin and in my culture - which really isn't a journey anyone should need to go on. It should be everyone's default to love themselves and their diverse attributes. Unfortunately, though, that is not the society we've set up for ourselves.

Once you're actively pursuing work within the entertainment industry this journey of self-love is an expedited one. If you're an actor, you realize there are very few good roles for you, so you better start writing and directing your own films. I've heard casting very blatantly tell me in my auditions to 'do the accent'. I've had an agent tell me I'll always have work because "there's always cab drivers in movies." I've been navigating a stream of interactions where the subtext is that my skin color is going to hold me back. In this, you really learn to define your self-worth and self-respect. You build up a resilience, and fire to work harder, because you know how crucial it is for your voice, and others like yours to be heard. 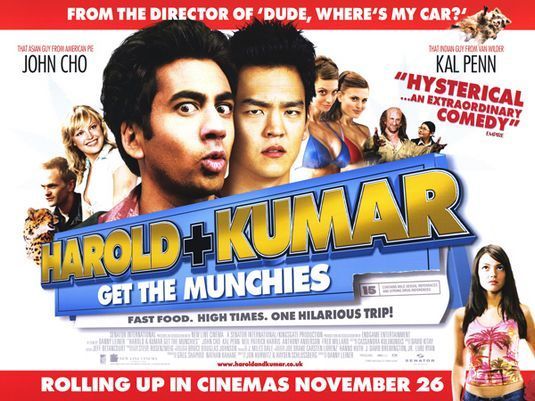 The color of your skin, and your cultural background is never a hindrance. Those are the things that make us unique, that give us rich and intricate stories that haven't been brought to audiences yet. Those are our superpowers in this industry, and in this world. Aziz Ansari, Mindy Kaling, Kumail Nanjiani, Hasan Minhaj, Aasif Mandvi, Ravi Patel, Kal Penn are some of the few brown entertainers that are really changing the game for an entire generation of kids. Showing brown kids that they can rock out in their awesome skin, and be the hero.

Seeing Kal Penn on the poster for Harold & Kumar was huge! It's a goofy stoner movie but it a critical moment for me growing up. Seeing a movie with an Indian and a Korean as the leads, and having those characters express frustrations with stereotypes instead of just playing into them showed me I could be the lead too. It was revelatory.

I never want an Indian child to grow up feeling like they can't be the confident one, the leader, because of the color of their skin, or any children of color for that matter. That's why we have to keep our voices strong. We've got to keep adding names to that list of diverse creators killing the game right now and soon we may have our first mainstream Indian superhero. (Pssst... I'm available.)