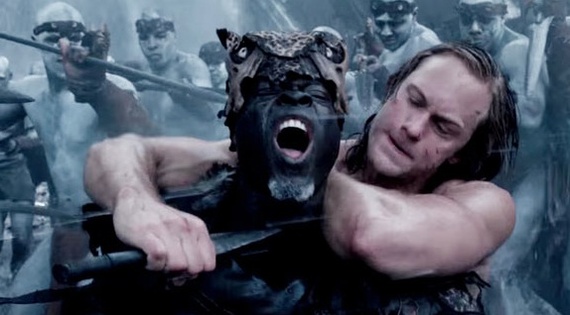 Why in the era of "Oscar so White" would Hollywood still make a film about a White man, Tarzan, as "King" of the African jungle?

Tarzan will always epitomize the history of eurocentric racist demonization of Africa -- whether it's the old black-and-white Johnny Weissmuller Tarzan of the 1930s with his jungle cry and interaction with bug-eyed African "savages", the 1950s Gordon Scott version, deep "in darkest Africa" or the Alexander Skarsgard 21st century version who has to be arm-twisted and convinced by a Black sidekick (Samuel L. Jackson as Dr. George Washington Williams; a tokenism role inserted to try and improve the problematic racial optics) to return to the jungle and help rescue Africans (Congolese in this case) from a bad White man, King Lepold of the Belgians, and his evil agents (including Christoph Waltz as Leon Rom).

Leopold --in this movie version, "The Legend of Tarzan"-- has been enslaving Africans, committing massacres, stealing ivory, and eyeing diamonds. He's now building a railway so he can deploy 20,000 more troops and extend his murderous domain over wider Congolese territory.

So let's send in a White man, now settled in England, but born in Africa to shipwrecked British aristocrats and raised by gorillas until he mastered the jungles; let him rescue the African "natives" who have lived there from the beginning of time yet somehow failed to master the same jungle environs.

Tarzan was a bad idea and remains a bad idea on many levels. We will come back to the White-hero-rescues-natives complex. Let's first deal with the stunning insensitivity to the history of colonialism in Africa and in Congo in particular. Maybe the setting should have been a fictitious country called Mobu-bundu (Hollywood has always been good at coming up with names like that); not the Congo that was ravished by Leopold and his agent Henry Morton Stanley and other sadistic imperialists.

Perhaps, instead of Leopold, a fictitious colonizing monarch could have been created to represent all the European powers that sliced up Africa (the "magnificent African cake" as Leopold called it) in 1885 at the Berlin Conference.

The real Leopold committed a genocide that claimed the lives of an estimated 10 million Congolese; countless more had their hands or feet amputated for failing to deliver their quota of rubber or ivory.

There are chilling photos of Africans holding up the severed hands and other body parts of loved ones. You wouldn't get a sense of the magnitude of Leopold's horrific crimes if all your African history comes from "The Legend of Tarzan"; which, unfortunately will be the case for many Americans who watch this movie.

Leopold of the Belgians wasn't the only imperialist who presided over massacres in Africa. There again is the major problem with "The Legend of Tarzan." By focusing on Leopold, the massacres committed by the British, French, Portuguese, Spanish, Dutch, German and Italian colonizers are whitewashed; why pile up on the Belgians?

Yes Leopold depopulated the Congo; but what about the British destruction of the Great Ashanti Empire, the Zulu Empire, and the Ndebele? The genocide of the Herero people in Namibia by the Germans was the first genocide of the 20th century.

If it's too complex to capture the horrors of European colonial conquest and rule in an action-film, and Lepold becomes emblematic of the worst of the worse, why does the hero --even this fictitious one-- have to be Tarzan?

When Edgar Rice Burroughs created Tarzan in 1912 all of Africa, except Ethiopia and Liberia was under European control. While many people saw Tarzan movies as "entertainment" the representations of Africa also had insidious intended consequences. The portrayal of Africans as primitive justified continued colonial rule.

Media demonization of Africans is a topic I've written extensively about -- it was the subject of my Masters paper at the Graduate School of Journalism at Columbia and of my book "The Hearts of Darkness, How White Writers Created the Racist Image of Africa."

Malcolm X, whose understanding of the power of media misrepresentations is underappreciated once told an audience that when Europeans controlled Africa they "projected the image of Africa negatively. They projected Africa always in a negative light; jungle, savages, cannibals. Nothing civilized and naturally it was negative to you and me. And you and I began to hate it. We didn't want anybody to tell us anything about Africa much less call us an African. And in hating Africa and the African we ended up hating ourselves without even realizing it."

So Why should Black people --and other viewers-- have to pay money to go see an imaginary White hero rescuing Africans in Africa; isn't this affirmation of the pervasive stereotype that Black people everywhere can't do anything for themselves?

Today in our 21st century, the best that imagination can come up with is to resuscitate a White hero who represents a discredited (evidently not to everyone) era? Don't we deserve better? What about a hero who is a descendant of enslaved Africans?

Let me suggest this one I just thought up: An enslaved African who embodies the spirit of Nat Turner escapes from a plantation in America, hijacks a ship, frees other African captives, and throws into the ocean the White captain and his men (just like African children, women and men were tossed overboard during the Middle Passage) to be consumed by sharks.

The new masters of the ship discover that it's stocked with hundreds of the first ever models of Maxim guns; the rebels sail back to Africa with this arsenal of weapons; they reunite with their sisters and brothers on the continent; and, combining fighting skills learned from the New World with African techniques developed by Tchaka of the Zulus, they attack and annihilate Belgian, British, French, Portuguese, German, and Spanish colonizers.

But they don't stop there. They pursue them to Europe and ransack their countries. They bring some of them as captives back to work on African farms so they can pay off some of their past loot.

Who would even want to watch Tarzan after this film?

We could even go with real African heroes instead of fictional characters for our imagined filme. Tchaka (or Shaka), the masterful Zulu general is relatively known; he wasn't the only one.

There is Samori Ture who defeated the French in several late 19th century battles; there is Muhammad ibn Abdallah, or the Mahdi, who defeated the British general Charles Gordon in Khartoum (Gordon's head was cut off although the Mahdi had ordered that he be captured alive); there is Empress Taytu Betul and her husband Emperor Menelik II of Ethiopia who both in the great Battle of Adowa led brilliant attacks against an invading Italian army of 10,000 commanded by Gen. Oreste Baratieri and killed nearly 5,000 enemy soldiers and two Italian generals and took thousands of prisoners as Baratieri, who had promised to return to Italy with Menelik in a cage, fled for his life.

So who needs Tarzan?

Congo itself had a hero, a Black shining Prince, Patrice Lumumba. After the sons of Leopold were driven from Congo in 1960, Lumumba as the new Prime Minister of independent Congo dared to imagine a new Congo, where the daughters and sons of the amputees would now own the gold, copper, diamond, timber, manganese, and coltan, and use the proceeds to heal and develop.

Lumumba was deposed within months by the Belgians with the involvement of the CIA and then brutally murdered -- his body was dissolved in acid. Dictator Mobutu was installed in his place and so began another chapter of Congo's nightmare. Yet Lumumba's short public life continues to inspire millions of Africans; just as the memory of the lives of Malcolm X's and Thomas Sankara's do.

Tarzan was imagined when Europeans still physically ruled Africa (nowadays the control is maintained by institutions such as the IMF and World Bank and through puppet "presidents" like Uganda's Yoweri Museveni); Africans were depicted as the antithesis of civilization.

Tarzan deserves to die or to remain buried. This is the era for new heroes.


Milton Allimadi publishes The Black Star News. The Second Edition of his book "The Hearts of Darkness, How White Writers Created the Racist Image of Africa" will be published on August 15, 2016. Please visit the new edition's GoFundMe page.