Sitting with AnnaLynne McCord at Jerusalem's Inbal Hotel on Sunday morning, the blond actress comes off as a regular person with some well thought-out opinions, and not as a Hollywood 'celebrity' one would expect. McCord is currently known for her role as Naomi Clark in CW's 90210.

While her manager insists that she eat her omelet, McCord is excited to share her experience and perspective of Israel in what is her first trip to the country with the organization "America's Voices in Israel." McCord explains that she was not afraid to travel to Israel and was excited to meet the people who experience the country every day.

"I've heard a lot against Israel back home, but I always knew there was a lot more to this country than what I've read and seen in the news," McCord told me. 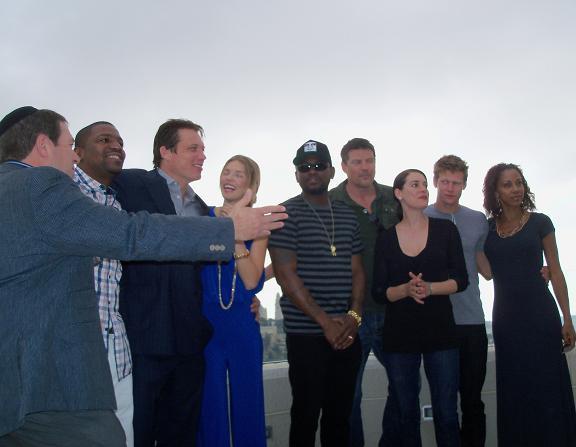 Photo Credit: Anav Silverman/Tazpit News Agency Description: America's Voices in Israel May mission to Israel in a group shot in Jerusalem. Left: Rabbi Irwin Katsof, Mekhi Pfifer, Holt McCallany, AnnaLynne McCord, Omar Epps, Paul Johansson, Paget Brewster, Zach Roerig, and Holly Robinson Peete. "The first question that I've always thought about in regard to the conflict here is how much of it is a holy war?" McCord explains that she knows the Biblical history of the region well, having "grown up with the Bible" and believes that there is "no room for the world to judge Israel or anyone in this conflict." "I believe there are always three sides to the story -- your side, my side and the truth," said McCord. "Until you actually live in someone else's shoes, you can never judge." "With all that negative coverage about Israel, I was amazed by the resilience, human spirit and optimism that people here have facing daily turmoil. You have to come see Israel for yourself to understand this -- that people can still have an amazing existence, with love and patriotism, despite all the odds."

The one characteristic that McCord says she particularly likes about Israelis is that "they don't care what you think, what the world thinks. As an actress, I definitely relate to that because people write mean and nice things about me all the time. I do what I have to do, no matter what the critics say. Israel does the same."

Peete wrote that "this country is so ahead of ours when it comes to caring for children with autism...I'm inspired."

The itinerary for the trip included visits to Jerusalem's Meshi, a rehabilitation center and school for 196 children with severe neurological and muscular disabilities who receive the world's top treatments, and the Na'Alagat Center in Old Jaffa, a theater group made up of deaf and blind people who are Jewish, Christian, Muslim and Druze.

For others, the trip reinforced the spiritual dimensions of the Holy Land. Omar Epps, on his second visit to Israel with America's Voices in Israel, explained that it was the country's "rich history, culture, people and energies" that drew him back. "For me personally, the spiritual significance of this place hits me to the core. The fact that the world's three ancient religions meet in one place makes the holiness of this land so unique," said Epps. "I'm bringing my kids here next time to experience this land together with my wife."

Even the Dead Sea took on religious significance when Mekhi Phifer tweeted jokingly before the group's descent to the world's lowest elevation on land that he "might even get baptized in the Dead Sea."

Visits and tours to Masada, the Golan Heights, Haifa,Tel Aviv, Jerusalem's Old City and Christian sites including Mount of Beatitudes, Tabgha, Geinosar and the Church of Holy Sepulchre in the Old City of Jerusalem also left strong impressions on the stars.

"I would love to come back here to film a movie someday," said Holt McCallany, Hollywood actor, writer and producer, who starred in Fox's Lights Out." It was amazing to be able visualize all these stories and settings," he told me.

At the farewell dinner, Mekhi Phifer thanked Rabbi Irwin Katsof, director of America's Voices in Israel for organizing the week-long trip from May 7-13. "It's been a privilege to be enveloped in your culture," Phifer emotionally told Katsof.

Rabbi Irwin Katsof has been involved in bringing missions to Israel for the past 20 years and today directs America's Voices in Israel which was founded in 2001 and is part of the Conference of Presidents of Major American Jewish Organizations. He is a businessman, educator, author and successful entrepreneur, who has brought the likes of Starbucks founder, Howard Schultz and Lady Margaret Thatcher, and others, to Israel.

Katsof explains that his missions entail a no-strings attached rule. "The groups are presented with the facts, and have the opportunity to meet with Israelis across the spectrum. They come to their own conclusions about the country."

May's trip was a cooperative effort between the Ministry of Public Diplomacy and Diaspora Affairs, Ministries of Tourism and Foreign Affairs, El Al Israel Airlines and the Jerusalem Inbal Hotel.

For Israelis who caught a glimpse of the stars, excitement ensued as requests for photos and autographs were readily answered by the actors and actresses. The more well-known of the group, AnnaLynne McCord and Zach Roerig, found themselves posing with countless star-struck teenagers at Jerusalem's Inbal Hotel.

"It's a bit overwhelming," said Zach Roerig. "I never expected so many fans in this region of the world." 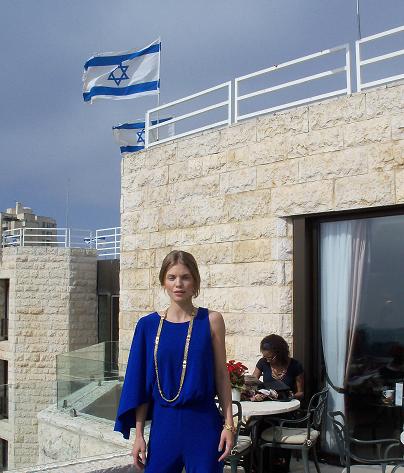