As a Muslim committed to building cohesive societies, it was an honor to step up to the plate. Quran 3:133, "And vie with one another to attain to your Sustainer's forgiveness and to a paradise as vast as the heavens and the earth, which has been readied for the God-conscious." I am not driven by paradise, nor do I seek rewards. But it does mean building a cohesive world where no one has to live in apprehension or fear of the other. God-conscious simply means being caring and sensitive to all of God's creation; life and matter.

Of all the people on the earth, my mother would be pleased to know I am doing what it takes to be a "good Muslim," to respect, honor and protect the sanctity of life.

I have always believed, and I read the assessments of some of the best brains that if we can resolve the Jewish-Palestinian conflict, i.e., security to Jews and justice to the Palestinians, most of the world issues will collapse and a period of peace on earth will begin. 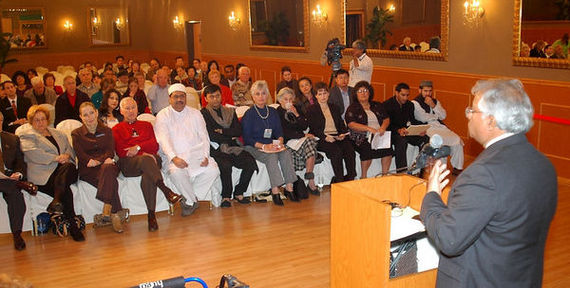 Commemorating Holocaust and Genocides for seven years is a fulfillment of a lifelong desire. 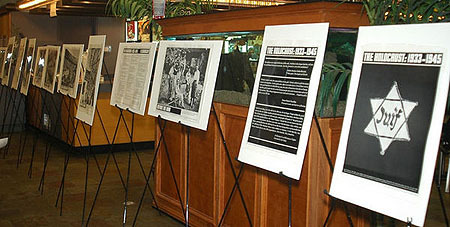 Here is how it happened.

When I was ten years old, I read just about every book my mother read. She was indeed a voracious reader on religion and social sciences; however, I was banned from reading certain books, and one of them was "Eishmann 60 lakh Yahudiyon ka Katil" in Urdu language. That is Eichmann, the killer of 6 Million Jews. My mother insisted that I was a kid and I should not read the book, she was protective of her child. However, I was able to sneak in and see a few horrible pictures which had shut me down for the next 44 years of my life. 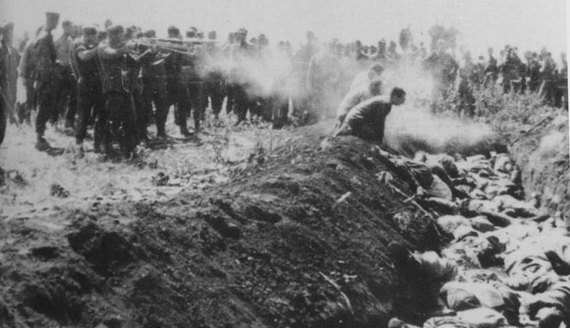 The picture continues to influence me; it is about betrayal of a people. A group of Jews were shoved in front of a ditch and then were shot into the pit. The looks of helplessness on their face, as if looking at me and saying, "you are not going to do anything about it?" They were not complaining, but with all humility enduring the betrayal from the entire world, it has been a difficult picture for me.

For the next 44 years of my life, I was not able to see the WWII movies with scenes from holocaust on the screen. I would turn the TV off and go into silence for a while, just could not get over the idea how people can do that to other people. There was fear in me, fear to witness that betrayal. They never begged any one to save their life and just stared into the spaces even without complaining. I have held them in a very high esteem for the dignified death they faced.
Fast forward: Sunday, September 11, 2005.

The first Public commemoration of 9/11 was initiated by Muslims, and we called it Unity Day USA to boldly bring together Americans of different faiths, ethnicities and cultures together to rededicate our pledge to the safety and security of America.

About 650 People attended the event including 10 Mayors and several Police and fire chiefs, FBI Chief, and clergy from every faith and civil leaders were represented in the event.

While Mayor Joe Chow of Addison was speaking, the Fire Alarm went off creating a panic. Remember, it was a 9/11 commemoration! Most people were dashing out of the building including my Jewish friends who sat in the front row, what I distinctly remember was the fear in their eyes, and that bothered me to no end. They were my guests and that is no way to treat the guests. 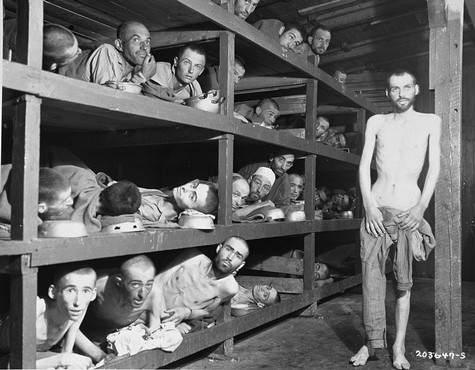 No human should be afraid of the other.

It was a false alarm; Mayor Simpson of Frisco announced it within 3 minutes. I asked the FBI Chief Guadalupe Gonzalez to assure the people and ask them to come back, finally, everyone made it back and took the seats waiting for the Fire Marshall to come and turn the Alarm off. I love Mayor Joe Chow, while all of this was happening he continued with his speech.

That fear prompted me to do something about it, not sure what. But I do know what Goethe had said, "When you are committed, all sorts of things will happen to you, and providence moves in and God paves the way to fulfill your commitment." In November, the United Nations made a proclamation to commemorate Holocaust on January 27, 2006. I said to myself, did God pave the way for me?

I called on my friends with the idea of commemorating the event, and thus began this journey. Education is the purpose; we have to learn, acknowledge and reflect upon the terrible things that we humans have inflicted upon each other, and we have to understand that our safety hinges on the safety of all others around us. It is a comprehensive event where all human failings, massacres, genocides and Holocaust will be addressed in one fashion or the other. 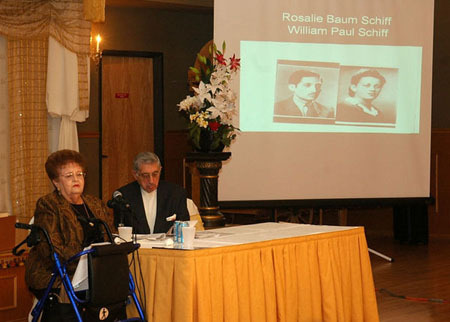 Yom HaShoah has been commemorated in Synagogues since the 50's, and for the first time in history, others have joined in the commemoration, it's just not Muslims, but people of all faiths have participated in the interfaith pluralistic prayers. I just want to assure my Jewish friends that you are not alone; we are with you in the most somber moment of your life. 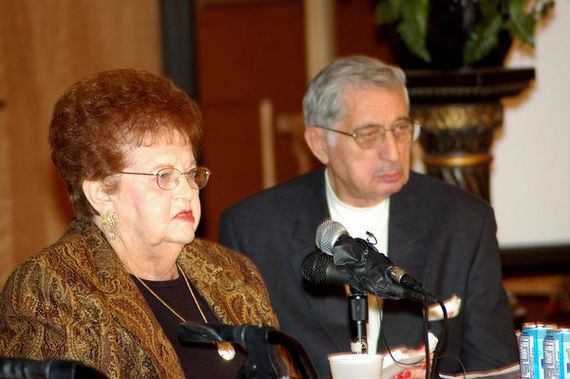 The first commemoration lifted a huge burden off me. I felt the relief. This was my calling - to build bridges. William and Rosa Lee Schiff, the holocaust survivors delivered a talk for over an hour - it was literally pin drop silence.

There are incredible stories associated with this journey. There was harassment, threats, bias, and prejudices from across the spectrum. Each group was about me, me and my pain.

We had many a tense moments, some were purely political, everyone was reluctantly ready to face them; it was the resistance to the inclusion of pain of others. Although I do not believe in divine intervention, a revelation came to me a few seconds before such an acknowledgment.

"Dear friends, it is painful to miss out the suffering of one people or the other, we do not want to live with the burden of consciously or subconsciously excluding the suffering of any, hence, to be fair to all, let's silently pray for every atrocity that comes to our minds, and pray for the relief of the victims, and punishment or release to the perpetrators" - Sounds simple? But that offered a magical relief to the people who were tensed up for that moment. Thank God, every atrocity was silently included in one's prayer or the other.

It has not been an easy story. A few have dropped me from their lists; a few did not want to see me ever again. People who taught tolerance were intolerant; a few people in the pulpit did not tell the truth to their congregants. Maria Arita of Fox News and I had a heart to heart on a few items. Maybe, I will write a chapter urging people and organizations to guard themselves from a few who can prevent good things from happening. Thank God, we have made through it all.

Hate is one of the many sources of disrupting peaceful functioning of a society and it is our duty, both individually and severally to track down the source of such hate and work on mitigating it. Indeed, each one of us needs to do our share of work. It is also our moral responsibility to keep law and order and faithfully guard the safety of every citizen.

The spark of hatred will not disappear through law and order, it would be temporary off the screen, but will reappear at every little conflagration. As civil societies, this has to be worked out for the long term good. 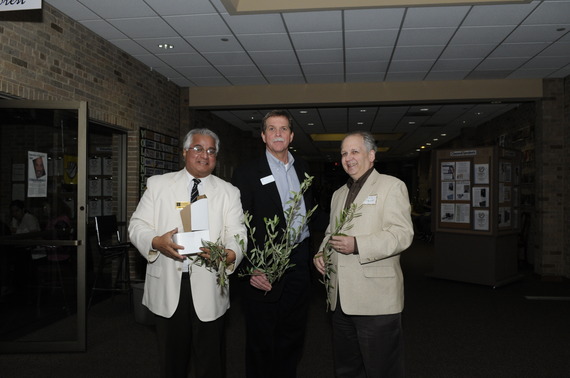 The injustice done in the past will not fall off the earth, it lingers and eats away peace between individuals and nations, and we are responsible to bring a closure to the loose ends of many a conflict, so we all can trust each other and feel safe, and focus on the collective prosperity of all.

The program will address preventing such occurrences, and most importantly, how to bring closure to these sparks and work on building cohesive societies, where no human has to live in apprehension or fear of the other.

There is a shameless cruelty in us, either we shy away or refuse to acknowledge the sufferings of others, worrying that it will devalue our own or somehow it amounts to infidelity to our own cause. Shame on us that we justifying massacres by believing and propagating that the victims deserved it or asked for it.

We sincerely hope the attendees will walk out with the following understanding:

The event is on Sunday at Unity Church on Forest lane. Details at www.HolocaustandGenocides.com 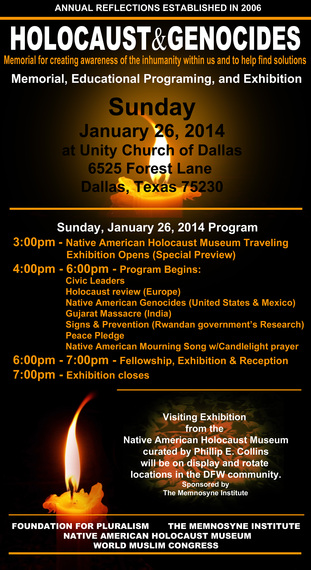