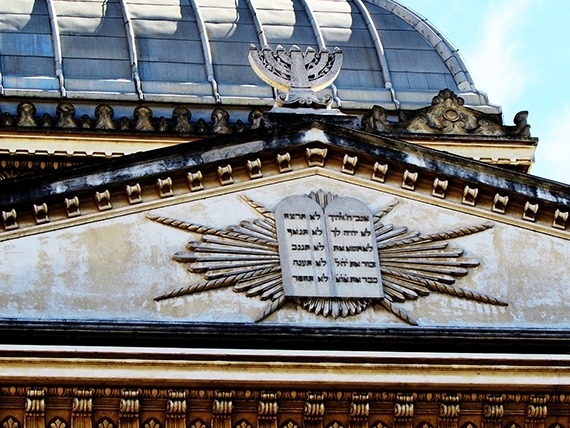 Every year right before Holocaust Remembrance Day, I reflect upon what might have been, and what the future holds, especially these days, as pre World War II anti-Semitic displays are reemerging, and the political climate is growing stormier concerning the state of Israel.

Like many European Jews, I lost the vast majority of my family in the Holocaust. I was born the second summer after the war, and memories were still fresh and painful, and so my childhood was strongly influenced by the memory of those who had perished. Truth be told, much of my search for answers has been driven by the specter of the Holocaust, and the unrelenting anti-Semitism I myself experienced as a Jew growing up in Belarus.

When you grow up under such a shadow, you often ask yourself "Why?" and "How?" questions: Why did this happen to us, Jews? What did we do that was so wrong? Why have we been persecuted throughout our history? How come there are still Jews, when so many nations and peoples that were greater and stronger than us have been reduced to pages in history books? Is it true what anti-Semites say about us, that we are causing all the wars and troubles, and that we are trying to take over the world?

I believe that almost every Jew is at least slightly troubled by these questions. To me they were so pervasive that they drove me into action, in search for answers.

I searched in science, religion, philosophy, ontology, and Kabbalah. My search has taught me that we are living in a closed system, whose elements are interconnected, interdependent, and whose inexorable evolution determines its laws.

However, I have also learned that although you cannot change our interconnected future, you can certainly determine if you get there pleasantly and smoothly or the contrary. Indeed, even the Holocaust, the most satanic act of genocide ever perpetrated, is no exception to the rule. Just as a jump from a twenty story building will inevitably end in death unless you have a parachute, defying the law of human evolution will unfailingly invoke disaster, unless you learn how to use it like a parachute. And if you do, you will glide down as the breeze caresses your face and the landscape stretches out for miles before your eyes, and you will touch the ground safe, sound, and joyful.

And this choice between gliding down and crashing down brings me back to anti-Semitism and the Holocaust. The inexorable progress of the system we all live in drives us toward enhanced connectivity and growing interdependence. It would be easier to separate the eggs in scrambled eggs than to untie the connections already established among all parts of the world. Whether we are conscious of it or not, all human beings are connected on every level of reality. Therefore, the only way to establish peace and order in our lives is by learning to work in synchrony and solidarity with one another.

When I was working on my thesis, I learned that there are approximately 4,000 religions, belief systems, and thinking paradigms worldwide. So why are so many people claiming that the Jews are to blame for everything? Recent censuses by the ADL have revealed that nearly two billion people worldwide hold anti-Semitic views. This does not make sense. Moreover, I recently came across a tweet by an anti-Semite who wrote, "What you call 'anti-Semitism,' the rest of the world calls 'common sense.'"

What makes sense to anti-Semites is that we, Jews, are responsible for their suffering. And the reason, so I have learned, is that despite our almost instinctive apprehension, we are the chosen people. We have been chosen to be a light for the nations, but we neither understand what that light is all about, nor desire to learn.

And yet, the inexorable progress of our world requires that we learn it. The ancient society of the Hebrews was based on unity that did not entail equality. They managed to harness their egos to the benefit of the whole, thus allowing each member of society to fully realize one's personal potential, and at the same time fully contribute the fruits of that potential to the good of society. The result was the thriving society of the Hebrews that lasted many centuries, through trials and tribulations, and collapsed only when they failed to keep the rules that helped them direct their egos to the common good.

Since the collapse, our self-centeredness has run amok. But the original plan was not for the Hebrews to keep the knowledge of maintaining such a society to themselves. The idea was to spread it to all of humanity, so everyone would be able to enjoy its benefits. This is the meaning of being a light for the nations--being a role model of unity above egoism--achieving personal fulfillment alongside social prosperity.

This is the unique combination that the world so badly needs these days. When we do not provide the world with this imperative knowledge, although we have no clue of it, we are blamed for causing wars. The world instinctively feels that we are holding the key to their happiness, to their social and personal success. This is why it makes perfect sense to them to hate us, as the anti-Semite wrote on Twitter, while we interpret their hatred as benighted, baseless anti-Semitism.

Evidently, the repose we have been given following the Holocaust is quickly coming to a close. The task incumbent upon us is just as valid now as it has always been. We may not like it, but we cannot escape it, due to the unstoppable progress of reality toward increased interconnectedness, and the growing urgency to find a way to invert its negative impacts on our society. The more entangled people feel, the more helpless they will feel, and the more they will blame it on the Jews. It is inevitable because we are the only ones who can provide a viable method for dealing with it, and they subconsciously sense it. This is why the way to tackle anti-Semitism is to relearn the method for nurturing solidarity, implement it in society, and become a role model that everyone can follow, should they want to.

I realize my words will not be popular or well received, but they offer a valid way out of the mess we are in. Without employing this method, extremism of all kinds will increase, and society will eventually collapse. As a result, the Jews will be held accountable, with all that this entails.

We simply cannot let this happen again. "Never again" does not mean that we will tell the nations they are wrong for hating us. It means, or at least should mean that never again will we let a chance to redeem our society from hatred and animosity pass us by. We, the tortured nation, who are regarded by much of the world as the most arrogant, must lower our heads, unite, and show the world it can be done. Because if we--whom the Torah (Ex, 32:9) regards as stubborn and stiff-necked--can do it, anyone can do it.