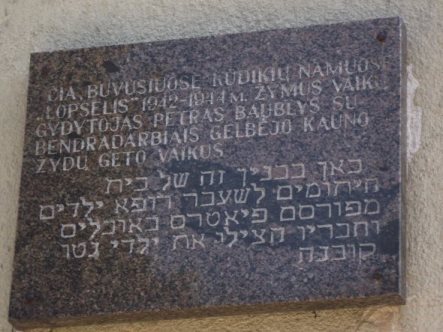 On January 27, International Holocaust Remembrance Day, people throughout the world will remember victims of the Holocaust. In Lithuania, teachers and students will join this day of commemoration by launching a project called "The Rescue of Another is the Highest Human Virtue."

The new project aims to "encourage the younger generation to understand that everyone is responsible for his or her actions, that good deeds and noble actions reveal a person's moral and spiritual value," according to the International Commission for the Evaluation of the Crimes of the Nazi and Soviet Occupation Regimes in Lithuania, which is organizing the initiative along with the Vilnius Jewish Public Library.

Throughout this small Baltic country, on this 71st anniversary of the liberation of Auschwitz, students will begin seeking out elders in their communities in a concerted search for untold stories of rescue - instances when non-Jewish Lithuanians sought to save their Jewish neighbors from death during World War II.

For centuries, Jews and their non-Jewish neighbors lived in Lithuania relatively peaceably. But during World War II, this place of relative harmony became a land of ghettos and mass murder. By the end of the war, only 6 percent of Lithuania's 240,000 Jews remained alive.

Some of the Jews who did remain alive were saved by non-Jewish Lithuanians who smuggled them out of ghettos, pulled them out of death marches, concealed them in barns and cubbyholes, and secretly passed them from home to home.

Renowned rescuers in Lithuania include Chiune Sugihara, the Japanese diplomat stationed in the city of Kaunas who defied orders to help thousands escape to safety, and Ona Simaite, a librarian at Vilnius University who made repeated forays into the Vilna ghetto to bring in money and bring out children. Dr. Petras Baublys worked with the Jewish underground in the Kovno (Kaunas) ghetto to hide dozens of children in his orphanage.

Yad Vashem, the Holocaust museum in Israel, has honored 877 Lithuanian "righteous gentiles" who risked their lives to save Jews.

At the Vilna Gaon Jewish State Museum, an exhibit called Rescued Lithuanian Jewish Child Tells About the Shoah presents the stories of children who survived with the help of their Lithuanian neighbors. "These stories show that people had a choice," said curator Danute Selcinskaya. "This is the medicine for the unhealing wounds of the Holocaust."

The exhibit does not whitewash the fact that rescuers were few and far between within the Lithuanian population. "We talk about the killers," Selcinskaya said, "and about the many Lithuanians who participated in the civil administration of the Nazi regime. The stories we tell are as complex as the reality."

As students talk with their elders about the lost Jewish world, they will help to determine whether Lithuania is destined to be a place where neo-Nazi voices grow louder, or a land where people take Holocaust remembrance seriously and dedicate themselves to ensuring that such a tragedy cannot happen again.

Together, old and young will explore questions of vital importance:

What do we expect of ordinary people in extraordinary times?

What would I have done? And what will I do?

As they ponder these questions, Lithuania's young people will have the opportunity to become a new generation of rescuers - rescuers of their nation's memory, rescuers of moral conscience.