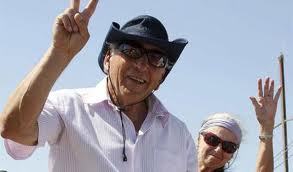 My Uncle Sonny (his real name is Arthur but don't tell) has always been an instigator. The best kind. While I should have been studying about flax production in Iowa, back in eighth grade social studies, Sonny turned up at my parent's house with a double length John Lee Hooker record. This morning was no different. Along with about 30 others, I got an email from him and I read it as I was walking my dog.

The email began with a photo of an elderly man and this caption:

My name is Reuven Moskovitz and I am a Holocaust survivor. I, as a holocaust survivor cannot live with the fact that the State of Israel is imprisoning an entire people behind fences. It's just immoral. What happened to me in the Holocaust wakes me up every night and I hope we don't do the same thing to our neighbors.

Needless to say, Moskovitz is a man of great compassion and one who knows as much as anyone about the most horrific crimes against humanity. Sure, some will say that he is "wrong" about this, but in any case he deserves respect for speaking his mind based on his experience.

The first response to Sonny's email, the one that set me off on this tear in the first place was from M. He wrote:

An intelligent mensch. I can't think of a worse example of cultural lag -- revenge against the Palestinians for what the Germans did to the Jews. And the youth on both sides are brought up to hate each other: Death to the Jews/Arabs is common graffito. I saw one notice on a wall in Hebron: Gas the Arabs. Oy! I recommend Gatekeepers doc (Former heads of Mossad) and Miko Peled's The General's Son for some insight.

Here's how I responded to M. and everyone else cc'd on Sonny's email:

I'm not sure if your reference to "...a worse example of cultural lag-revenge against the Palestinians" suggests that as an example, this is the worst -- because of its irrelevance, or are you saying that the IDF operation and the blockade over Gaza in general, is an act of revenge for what the Nazi's did to the Jews -- or perhaps toward the Gazans themselves?

For those of you who suggest that the pullout from Gaza nine years ago, and Israel's subsequent need to take defensive measures has anything to do with revenge, let me take you back in time. There were 14 million dollars worth of hydroponic flower factories, tens of buildings and schools left intact, plans for parks, a railroad, a seaport, an airport, even a zoo -- all of these things were left and all these plans were laid for the Gazans to begin the construction of their own state. As you well know, none of it happened and not because of anything Israel did to prevent it from happening.

Did the billions of dollars that were funneled by the US by the EU -- and by the State of Israel itself -- go straight to developing these wonderful ideas for the future prosperity of newly-Judenrein Gaza? No, in fact they were not. Soon after representatives from Hamas were finished throwing their rivals from Fatah off of the roofs of buildings (and we think political discourse in America is getting rough) the people of Gaza handily elected Hamas, along with their charter calling for the destruction of Israel, to represent them.

Just so we're all clear about history: the "blockade" didn't begin until the flower gardens were razed and turned into launching sites, until tunnels were dug and munitions brought in from Iran and Sudan and until the rockets started raining on the Jews in southern Israel.

A bit about the rockets... I hear too often -- or used to hear, because now the Grad and the Fajr-5 missiles are falling too -- how the rockets that were initially launched at towns like Sderot in southern Israel were nothing more than firecrackers, that the blockade and the other measures the IDF put into place were "wildly disproportionate." Consider this: The least of those "firecrackers" can tear a grown man to pieces from a football field away if he's not protected by a cement structure.

M., you write about the 'death to the Arabs' graffiti on the walls and I agree, it's repugnant, absolutely wrong, absolutely horrific. Though one critical distinction must be duly noted: The vitriol on the part of the Jews comes from thuggish far-right soccer fans and is condemned by most thinking Israelis and Jews. The vitriol on the part of the Arabs is state-sponsored, classroom taught, societally consensual, and is reflected in the charter of Hamas and the as yet unchanged, covenant of the PLO itself.

Dr. Moskowitz's experiences in the Holocaust should compel us to have the greatest rachmanus, (mercy in Yiddish), they should compel us to have the greatest understanding and respect for life, but they should not compel us to consider his ideas wise -- if our goal is the protection of human life on both sides. Just for the record, and sadly this actually needs to be said: The taking of innocent human lives, each and every one (notice there are no "buts" here) is a tragedy.

I know several Holocaust survivors, men and women both in the US and in Israel, who have lived through the same horrors as Dr. Moskovitz, whose ideas are the polar opposite of his. The opinion that Israel is somehow committing the same atrocities on the Palestinians as the Nazis perpetrated on the Jews in WWII is such an extreme minority among Holocaust survivors, as to hardly be worth mentioning. To equate the systematic murder of six million innocents with the justifiable defense of one's homeland from bloodthirsty attackers is an insane moral calculus -- no matter the degree of suffering Dr. Moskovits has endured during his lifetime. To glean the understanding that his ideas are representative of any larger group is simply wrong.

Let me cut to the chase. Some of us need to do some soul-searching. Some of us need to truly consider if Israel has a right to exist. Don't give a knee-jerk "yes of course." We need to ask ourselves, is the State of Israel a legitimate expression or not? Do we have the right to a State in that land, no less than Norwegians have the right to live in Norway? If you say we don't, I'll disagree vociferously on a hundred grounds -- not the least of which is that we Jews have had a continuous presence in the Land of Israel since ancient times and that our cultural narrative has for thousands of years, been about our eventual return to Zion (can the French make the same claim to France, can the Canadians make the same claim to Canada?) but as with Mel Gibson's drunken and candid admission of his anti-Semitic leanings several years back in Malibu California, I will at least acknowledge your candor.

Those of you who've read left-leaning Haaretz editor, Ari Shavit's book, My Promised Land, will know for one thing, that for the Palestinians, the issue of Israel's legitimacy has nothing to do with giving back Gaza (clearly not) or the West Bank or with a return to the '67 borders. You'll soon realize (as if the charters and covenants calling for Israel's destruction were not enough) that the real issue is May 14, 1948, Israel's declaration of Independence. The Arabs call Israel's Independence, the Nakba -- the catastrophe -- and obviously, that happened well before 1967. Don't forget the Khartoum conference in 1967, just weeks after the Six Day War, when Israel's offer to return the land it gained in that defensive struggle was met by three "no's" from the Arab summit: No Peace with Israel, no recognition and no negotiations.

If you can say that Israel has the right to exist, than you must, in the same breath say that it has the right to defend itself from a fanatical religious cult that is hell-bent on its destruction. Defending a nation isn't pretty. It always involves blood and gore, something we who are safely ensconced in Santa Monica, perhaps jogging near the beach -- or in Minneapolis sampling Hagen Daz by Lake of the Isles -- or dining with friends and business partners in Manhattan seem to forget. It's so easy to take the armchair pacifist's position when you've never shit your pants from the report of a rocket falling too near.

Proportionality is another word that is starting to sound absurd given the context. You've been reading this every day for weeks: "300 Palestinians dead but there have only been three Jewish fatalities" -- as if by dying in greater numbers we can legitimize ourselves. Both sides invest in bomb shelters; Israel invests in them to shelter its citizens from bombs. Hamas invests in them too -- except they use theirs to shelter their bombs. Not entirely true... they use them for their leaders too -- leaving their populace to become bloody photo-ops.

M. this war is not about "revenge" against anyone and it's not some kind of a "cultural lag." It's a legitimate defense against a regime that is focused on the murder of Jews. The youth on both sides are not "brought up to hate each other." That is a completely false statement. There is no equivalence. To suggest it is beyond absurd. It is also dangerous. The false moral relativism it creates is the vacuum in which Jewish people die -- with the seeming full consent of the world.

In an effort to console me, my son Isaac put it all this way: "As difficult as it appears now for Jews in the world, compare our situation to where we were a hundred years ago. Be grateful that these days, our challenge is one of how much of our awesome power do we wield, and with what measure of mercy shall we mete it out?"

For those who truly support the State of Israel, that is consolation indeed.