Semana Santa (Holy Week) started this week once again in its ancient, timeless tradition in a little village called Tzintzuntzan, near Patzcuaro, in the Central Highlands of Michoacan, Mexico. Three times in the last 20 years I have gone to Tzintzuntzan to document their Semana Santa (but also because I always loved being in the church square with its ancient olive trees, to just sit there during the week and be entranced by what happens...which is a lot and non-stop).

The week is filled with mysterious rituals and processions (complete with crimson hooded horsemen entering the church on horseback) that have much to do with the grafting of Catholicism to ancient Tarascan culture. For most of the week the young men of the village, hooded in red and with lavender robes, each on horseback or a donkey, "patrol" the village to make sure no craftsmen or stores are doing business as usual. They place themselves at all the intersections in the middle of the dusty atreets and without ever speaking, communicating only with whistles, they periodically shift on the grid of the streets.

Central to the week are the processions and the penitents lead by seven massive crosses which have been entrusted to seven families for several hundred years. During Holy Week the crosses are taken from storage in the homes and paraded repeatedly, with great ceremony, through the village. On Good Friday, the seven crosses are arranged in front of the entrance to the church and as in villages all over Mexico the Passion Play is performed by the villagers. It is said that as recently as the 1970s, in a village in the mountains near Tzintzuntzan, penitents had themselves crucified with thin nails.

[The horizontal, "letterbox" images are not cropped but shot with a Noblex, swing-lens camera.]

Another village that I visit frequently in Mexico is Real de Catorce, one of Mexico's designated "magical cities" high in the mountains of the state of San Luis Potosi. It is an old spectacular colonial town that remained largely abandoned until the early 20th century. Half of it has been rebuilt over the years but it retains much of the character of its early years. A few years ago I was there during their Semana Santa and shot this video: 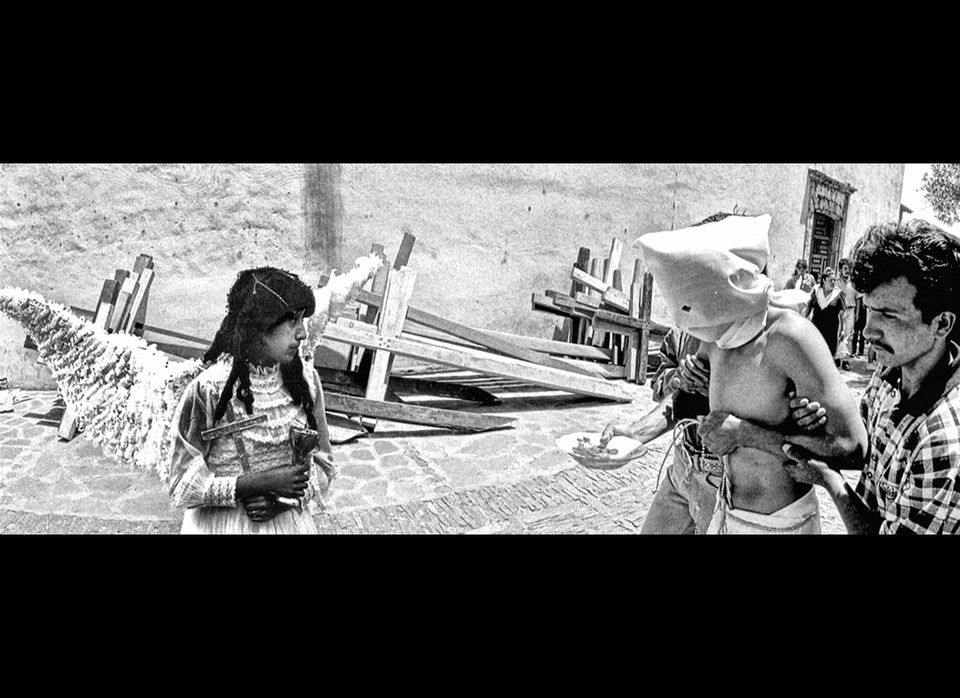