My job gives me the opportunity to write about many current and former shelter animals. All of them are special in one way or another, as are the people who welcome them into their homes, and I take great pleasure in sharing their stories via a shelter newsletter and social media. But I can't remember a story that affected me as much as the one that follows. I hope it moves other people and inspires other shelters and rescue organizations to expand their definition of a good home.

They say, "Home is where the heart is."

In this case, "home" is Malta House, an assisted living community in Hyattsville, Maryland. And the "heart" is Olivia, a German shepherd mix who now shares the residence with 31 senior citizens. The story of how this once homeless two-year-old dog came to Malta House makes you believe that some things really are just meant to be.

Olivia arrived at the Washington Animal Rescue League (WARL) in December 2013 when she was six months old, one of seven dogs from an overcrowded partner shelter down south. Given her sweet disposition and cute scruffy "beard," WARL staff were not surprised when she was adopted just one week later. Another successful adoption...or so they thought.

Fate, however, had other plans for Olivia.

Almost two years after leaving WARL, she was returned. It turns out Olivia had severe separation anxiety, which led to excessive barking and urinating and defecating indoors. She just couldn't handle being left alone.

Not surprisingly given her sensitive nature, Olivia found shelter life extremely stressful and her anxiety only increase, to the point that she required medication. Staff began looking for a special foster home...one where someone was home most, if not all, of the time. They knew they faced a challenge.

From her years of experience in eldercare, Orchard knew that animals can positively impact the quality of senior citizens' lives, especially those of people who have little if any contact with the outside world. She already had arranged for Pets on Wheels to periodically visit Malta House but as she explained, "It just isn't the same as having an animal around all the time."

So she began looking for a way to bring an animal into Malta House on a longer-term basis, both for the benefit of residents and to help an animal not doing well in a shelter.

When Orchard contacted WARL about the possibility of Malta House fostering a dog, foster and adoption coordinator Mandie Worsley immediately thought of Olivia; what better place for a dog with separation anxiety than a community where someone was always there.

But before proceeding, Orchard had to get the approval of residents, so she presented the idea during a Residents' Council meeting. Most of the residents were unreservedly enthusiastic. A couple, however, who had never lived with cats or dogs were less enthralled, but they said that if having a dog around made other residents happy, they would go along with idea.

Some staff members also had reservations. Yvonne Toukam, for example, was raised in Cameroun, where keeping dogs as pets was not the norm. Plus, her grandfather had died after being bitten by a rabid dog.

But Olivia quickly put everyone at ease. "Her gentle nature charmed everyone," recalls Caesar Dudley, head of the Residents' Council. And that includes Toukam, who now describes Olivia simply as, "my friend." 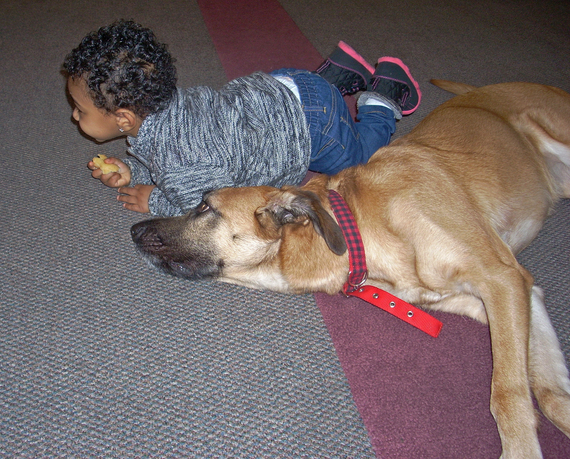 Olivia has even surpassed Orchard's expectations.

"She's very intuitive," Orchard explains. "She makes the rounds every day, nudging residents gently for a bit of attention, which they are only too happy to give.

Her impact is felt by everyone, especially residents with dementia or mental health issues. "Some of our residents have lost some of their short-term memory," says Orchard, "but Olivia may bring back positive memories from years ago, which adds to their quality of life. She has a calming effect on everyone."

"We love Olivia," says resident Eppie Fields. "She makes everyone happy. We didn't want her to leave."

So Malta House residents and staff chose to make the arrangement permanent. A mere three weeks after she arrived, they voted unanimously to adopt Olivia.

And that's good news for both the dog and the seniors in her "care." 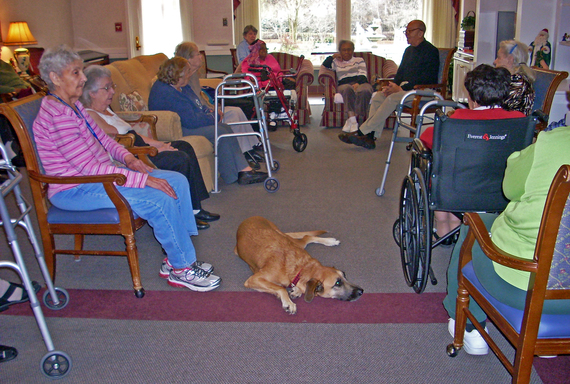 Her living arrangement may be unconventional, but it's obvious Olivia is thriving in an environment where she is with people all the time. When not making her rounds in the common areas, she relaxes in the front office, where she has a bed, food bowl, and water bowl. She enjoys regular walks, during which she has the opportunity to socialize with many of the neighborhood canines.

And when Friday rolls around, Olivia takes a break from her responsibilities and heads home for the weekend with Orchard or Gary Randall, one of Malta House residents' caregivers. But while she enjoys these breaks from her weekly routine, she's always happy to get back to her adoring fans on Mondays. "She gets very excited as we approach the front door and runs in and greets all the residents right away," says Orchard. And they can't wait to see her.

As Dudley explains, "She has brought joy into this house."