The new FHFA, Federal Housing Finance Agency, House Price Index has been published with data through the end of July, 2015. Here's a chart to get the discussion going: 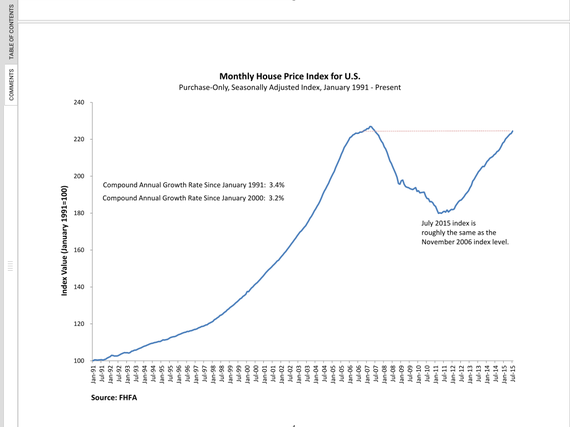 Notice that house prices are approaching the highs from 2006. We should be having parties, tailgate barbecues, rejoicing! We're not, simply because this is a number derived from repeat sales of homes, so let's analyze that a little.

The FHFA House Price Index tracks the resales of homes, from one price to the next resale price. Now, this is an accurate indicator of price movement if the home hasn't been materially changed since the previous sale. So, why is this high level not telling us that things are great?

First, and most important, it requires repeat sales of homes, so if there aren't huge numbers of sales, then we're looking at a number derived from a small set of sales data. So, we're not necessarily seeing an excited bunch of buyers flocking to the market. We are seeing a whole lot of homeowners who aren't selling, waiting for rising values. So, we have a small inventory and competition for it. If all of the homeowners on the sidelines listed their homes tomorrow, we'd see a major difference.

Now let's contrast some recent Zillow home sales price data. There are plenty of critics of the accuracy of Zillow data, but there is some value in it. A recent study at Zillow tells us that one in four homes are worth less today than a year ago. It's really hard to see one data set saying prices are rising to high historic levels, and another telling us that a major chunk of homes are worth less this year than last.

We're seeing around a third of major urban markets experiencing competition and significant price gains. However, the rest of the country is definitely not seeing a flood of buyers fighting over even a low inventory of listings.

Of course, you'll hear from the National Association of Realtors that Zillow's data is faulty, and I do agree that you have to take it with a grain of salt. However, if homes are worth so much more now than two years ago, would we not see a flood of listings from fence-sitting owners who want to cash in and move up or move away?

We're back to the "real estate is local" meme, and it's still around because it's very true. Your local market is going to have its very own unique economic and home price influences. You can't take national news and surveys and just apply them locally.

If you're a homeowner who has considered selling but held off due to market conditions, it probably is a good time to check out your home's value. Listing before the rest of the world figures out things are better will get you a better sell price.

Don't call an appraiser, as their approach to market value is different than that of a real estate professional. The real estate agent is trying to get you a sold price near to the top of the market, and their CMA, Comparative Market Analysis, is going to give you a pretty good idea of its value.

But, get a CMA from two or three agents from different brokerages. Their process requires choosing recently sold comparable properties, and their selection process can change the outcome significantly.