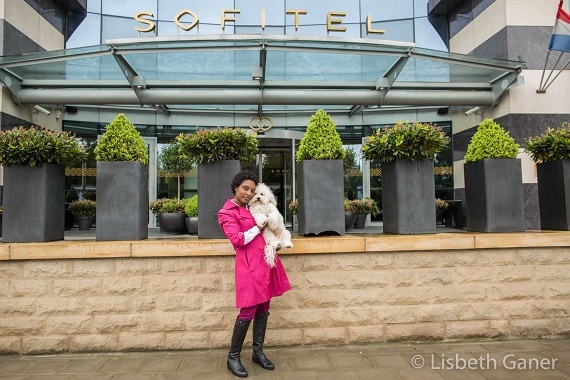 Brie and Murphy at the Sofitel Luxembourg Le Grand Ducal

When I found out that I'd been offered a job in Luxembourg my first feelings were total excitement. Woo Hoo! OMG! I'm moving to Europe! This is the most amazing thing ever!

But about 10 minutes after the initial excitement and shock wore off, I was overcome with a wave of pure and total panic. After all it wasn't just me moving halfway across the world, I had two dogs and a cat to worry about. Luckily when I had visited Luxembourg during my interview, I had seen enough dogs on the bus, trains, and in the stores to know that the general atmosphere appeared to be pet friendly, but it was at that moment that it occurred to me that I would be completely starting over to build up my web of pet references, resources and referrals.

My first order of business was to find and book a pet friendly hotel, one that would accept both my 85 lbs (40kg) German Shepard, McKayla, and my 22 lbs (10kg) Shih Tzu, Hunter. After scrolling through the lists of rental properties without any luck of finding one that was "pet friendly" I decided that it was best to wait until I arrived to resume my search for appropriate accommodations. And since I would be staying in a hotel for an undetermined length of time, I decided to leave my cat, Zoe, with my parents, and send for her after I'd found a place to live.

The second task was figuring out a way to ship my pets directly to Luxembourg since I wouldn't have a car initially after arriving. After calling several shipping companies I stumbled upon Jet-A-Pet International. My representative, Leigh, was a Godsend, and took care of everything. The only thing that I had to do was get their shots and health certificate. Jet-A-Pet made all of the arrangements to ship my dogs directly from our house in NYC to Luxembourg. All of the other companies that I had called told me that I would need to send my dogs to Germany and have them transported to Luxembourg by car. However, Jet-A-Pet had an arrangement with Cargolux, which shipped my dogs on a direct flight. They even arranged for the kennels, walked the dogs before they were crated, took care of all of the paperwork, and cleared them through customs. I must admit that I was nervous the whole day, wondering whether or not they would be OK. But in the end Hunter and McKayla were perfect and didn't seem affected by the trip at all.

My dogs were traveling on a separate flight and I arrived a few hours before them. That gave me enough time to go and find the essentials like food and beds. I asked the hotel where I could go and after searching on Google they directed me to a pet store in the city center. I stocked up on food, bowls, toys, treats, and beds, and since I didn't have a car, was obliged to take a taxi the 3 km back to the hotel at a cost of €10.

As I was alone in Luxembourg, I had asked my best friend, Rhonda, to come and stay with me for two weeks to help me get settled. While I spent my days at work and lunch breaks looking for apartments online, she would spend her morning calling various rental agencies and afternoons looking at properties. During her stay Hunter and McKayla had company and someone to walk them before I finished work, but as the time approached for Rhonda to leave I was obliged to search for a dog walker and hire someone to come to the hotel and walk my dogs for 30-45 minutes while I was at work.

Needless to say when I finally moved into an apartment after 18 days in a hotel, paying an additional €40 per night for 2 dogs, €50 per day for dog walking services, and €200+ on food, bowls, and toys, I was ecstatic and relieved. I was grateful to the hotel for their hospitality, but I was thrilled to be moving and settling into my new home.

A few months later I met a colleague who had just moved to Luxembourg with her husband and two dogs. We ended up comparing hotel experiences, but astonishingly hers sounded nothing like mine. She was staying at the Sofitel Luxembourg Le Grand Ducal in Luxembourg City (Bonnevoie), and couldn't say enough good things about their five star level of hospitality towards her, her husband, and their dogs. When I told her about my rush to buy the essentials after arriving, and how I had to take a taxi back to the hotel, she was sympathetic, but not empathetic. She explained that at the Sofitel the essentials for their dogs had been provided upon arrival, that the hotel staff was so nice and friendly, and couldn't seem to do enough to help them. 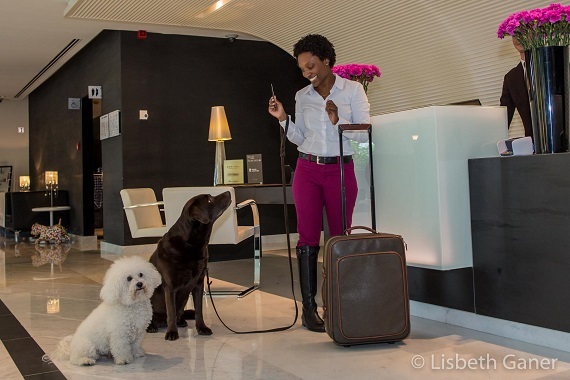 Brie checking in with Murphy and Maya
As the years passed I have run into more and more people who have moved to Luxembourg with pets, and each time we shared experiences there were always some similarities, but more differences. Some endured a longer wait time to find pet friendly accommodation while others were luckier right off the bat. But the one hotel experience that never seemed to be topped was the Sofitel. 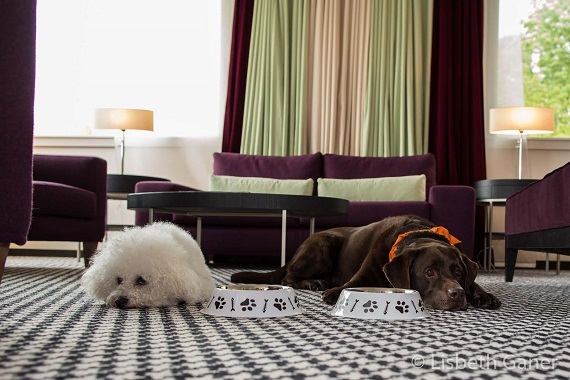 Murphy and Maya relaxing after dinner
Curious to learn more about the hotel's philosophy behind their pet friendly approach, I visited the Sofitel and interviewed their communications and public relations manager, Belen Irazoa. She explained that in 2007 the hotel chain underwent a reorganization which is when they made the corporate decision to treat pets as members of the family. They introduced the program called "My Dog" where they actually established a product for dogs. As part of the program the Sofitel provides hotel guests with beds, bowls, blankets, toys, and dog walking services for just €20 per dog per night. If a guest needs dog food that can be purchased at a store, a Sofitel staff member can go to get it. And if the dog has specific dietary needs, Sofitel can prepare meals to order. The hotel has no hesitation to prepare chicken or beef and rice and bring it to the pet in their room or even at the table while the owners are dining.

Ms Irazola explained, "This approach started as a mentality. We love animals. We really believe that a dog is a member of the family. We want to treat the whole family in that way. We want people to feel like they are at home." 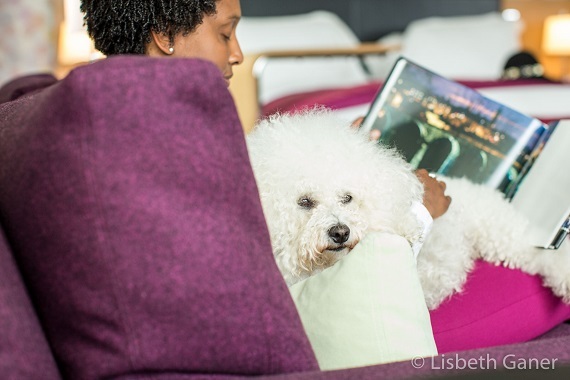 Settling into the suite
Unlike some hotels that I have visited, when Sofitel described themselves as being "dog friendly" that means more than just allowing dogs to enter the premises. At the Sofitel, dogs are allowed in all of the common areas, to stay unaccompanied in the rooms, and there is no limit to the number of dogs that are allowed in the hotel at one time. This is useful not just for families that are moving to town, but also for participants in dog shows. The rooms are typically 35m2 but normally there is no size limit that the dogs are restricted to. The most important thing that the guests have to remember is that they must maintain their dogs in a responsible way. The Sofitel strives to provide a wonderful five star experience for guests and their pets, and over the years say they have had no problems as a result of allowing dogs in the hotel and instead see only the benefits. 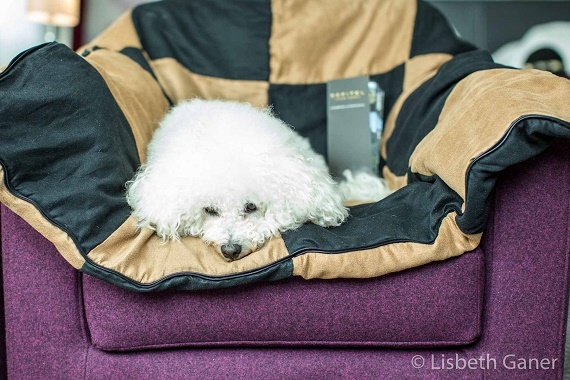 Murphy relaxing in the room

"When you decide one thing, believe in it, and go for it," Irazola said. "Adopting this program has given the Sofitel a more positive reputation. People that have come here have been very happy. Our hotel is like an experience and we want people to have a good experience whether its business or family, doesn't matter." 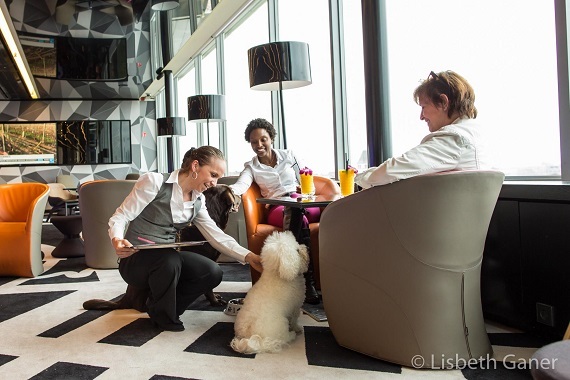 Christine, Brie, Murphy, and Maya enjoying a drink at the bar
Sharing vital information with other pet owners, like the Sofitel Experience, is just one of the reasons my husband and I created, Petopia - a new web platform that serves as a one-stop-shop providing all the vital information to maintain healthy and happy pets, mainly to people in the Luxembourg region. Continue reading on Petopia's blog, Zoe's Couch