Finding a sense of belonging in a new city -- or a new planet -- is a theme that runs deep in “Home.”

As the candy-colored aliens known as Boov move to Earth, attempting to escape their feared enemies the Gorgs, they forcefully relocate humans to Australia. But they manage to overlook Gratuity “Tip” Tucci, a 12-year-old girl (voiced by Rihanna) who had recently migrated from Barbados to New York City with her mother, Lucy (Jennifer Lopez). Lucy, however, is sent away.

Tip reluctantly teams up with Oh (Jim Parsons), a fugitive Boov, to reunite with her mother -- and during their global adventure they realize they must also protect Earth from a second deadly invasion by the Gorgs.

The new animated film is directed by Tim Johnson ("Antz," "Over The Hedge") and loosely based on Adam Rex’s children’s book The True Meaning of Smekday.

Ahead of the movie's nationwide debut on Friday, Johnson spoke to The Huffington Post about the movie's immigrant narrative and why he felt it was important that his heroine Tip not be animated to have a "standard supermodel body."

What do you feel truly sets "Home" apart from other alien invasion movies?

I mean, they take over the entire world and displace humans, and to do that as a comedy and to do it for families and have a nice wry, twisted humor to it all. I don't think you've ever seen an alien invasion like this one.

In a lot of alien invasion movies, whether it's "E.T." or others, there's a real strong boy-and-his-dog feel. That's not quite the feel that we went for. These guys are not friends at the beginning, so we got a real disparate group. An alien who's invaded a young girl's home and a young girl all on her own and who really can't stand this guy at the start. And in great buddy-movie tradition, it's fun to see how, one step at a time, they start to understand one another.

I found it very interesting the parallel between aliens looking for a home planet and Tip and Lucy being immigrants from Barbados trying to settle into their own new home in New York City.

Yeah, we really wanted to explore all the different ways that the concept of home works. Home can be a place and you can move to a new home, as Lucy and Tip did, and start a new life in a new country. But one idea of home are the faces around you, the people you love and the people that support you.

And just the idea that the Boov are crossing the galaxy looking for a home and are so presumptuous to think they'd be good for humans, that this is a lovely invasion and a positive thing, which they just justify for their need for a new home.

That idea that you can invade a place, displace its inhabitants and actually have a positive impact isn't exactly foreign on Earth.

I think a lot of adults will watch it and they'll know that European history throughout the age of exploration was one native culture after the other being told, "Oh, we'll be good for you, we'll bring you things. Our technology and our culture and our religion is better." So there's that not-too-subtle note that the Boov really selfishly think that by stealing our planet they're doing us a favor.

Could I be so bold as to label "Home" an immigrant story?

I don't think that's a bad label at all. I think an immigrant story can be a very large story, and that this one is very large. When you think about an immigrant story it's fundamentally about starting over with new prospects and new friends and new family and trying to build a better life. Even though they're selfish about it, that's really all the Boov are trying to do. And it's certainly what Lucy and Tip tried to do in moving to the States.

When you're an immigrant, you're a stranger in a strange land and all the faces you see are new faces and that's true for both of our big characters.

Oh (center, voiced by Jim Parsons) and the Boov

Tell me about the kind of changes you made from the book. I noticed that, like Rihanna, Tip is from Barbados. Was that added in or was it a weird coincidence?

I wanted to get the story bigger and larger than simply taking place in the United States, as it does in the book. And while we retain very much the character of Tip in the book, Tip is of African-American heritage in the book. But I love the Caribbean, I love all the melting pot of cultures there [and] we thought since Tip was the last human on Earth, how great if she sort of represented all of us. And there's very few places that you can point to that have that influx from four different continents -- South America, Africa, Europe and North America -- the Caribbean is just an incredible cultural area.

So we made a list of young actresses from the islands in the Caribbean, and at some point somebody said, "You know, Rihanna is from Barbados," and we all laughed because she would never do an animated film. But we made the call and it turns out she loves animation and was looking for a step into acting and agreed to do the movie.

You worked with Jennifer Lopez for "Antz" in 1998. How did you she become a part of "Home"?

In the book the character Oh actually takes what he calls the "common earth name J.Lo," so the book actually features the aliens taking celebrity names. It was just so fun for me to call Jennifer and say, "Listen, I'm working on another movie, do you know this book?" And of course she had heard of the book, everybody had told her about it and that aliens had taken her name. I pitched her the story. She loved the idea as a mom herself of giving voice to this very tender, very strong mother character. 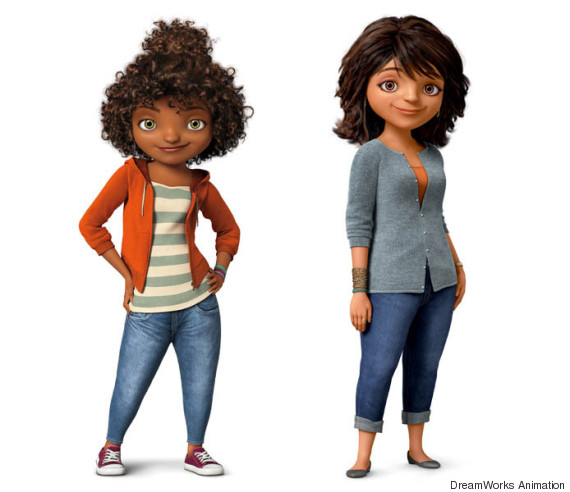 Speaking of your cast, there is a very diverse voice cast. You have Rihanna as Tip and Jennifer Lopez as Lucy. It's not very uncommon to see diversity in voices but it is rare to see it on screen as well.

If you're invading all of planet Earth, you're going to get genuine diversity, the whole planet of people and cultures and style and color. So we had fun looking at everything from colors of the fabric and colors of the skin in the crowds in the movie. And then staying true to the book and letting Tip have this beautiful curly hair and brown skin.

I also found it refreshing to see that both Tip and Lucy have these nice curvy, shapely bodies. Especially when you see so many animated heroines with unrealistic waistlines on screen these days.

That was a very conscious effort and a very important one to me. I felt like just on a narrative level -- ignoring all the cultural implications, which I certainly was aware of, and very much agree that it's very hard to have fashion magazines and celebrities and animated films all show us unrealistic, unattainable body types -- but more than anything I didn't want Tip to be a superhero.

I wanted her to be a real 12-year-old girl, with all of the vulnerabilities. I wanted her strength to be mental strength or emotional strength, I didn't want her to be a superhero or super curvy. The last thing I wanted to do was sexualize her. ... I just loved that idea that Tip would not be some standard supermodel body type but super athletic and attractive -- and in its own way a realistic look of a real dynamic personality on screen without having to be a princess.

CORRECTION: This article has been edited to correct the title of Adam Rex’s children’s book, The True Meaning of Smekday.

If Disney Princesses Had Realistic Waistlines