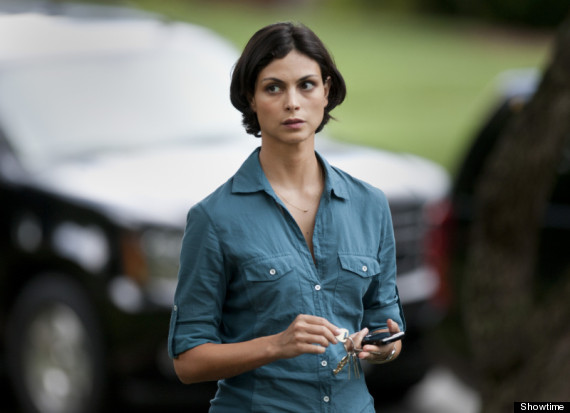 Note: Do not read on if you have not yet seen Season 2, Episode 5 of Showtime's "Homeland," titled "Q&A."

Well, was that enough to make you forget about Hurricane Sandy hysteria for an hour, or what?

Not that this was a hands-down successful episode. In fact, I have a feeling "Q&A" may end up being the most divisive episode of "Homeland" yet -- maybe even moreso than last year's mostly acclaimed finale.

Because however much you may have enjoyed seeing Carrie and Brody face off, and however differently that might have played out had Brody not been so emphatically softened up for her, there's really no world -- outside the fictional one depicted in "24" -- in which Peter Quinn's decision to stab Brody through the hand feels believable. And that seemingly-tacked-on scene where Saul asks a suddenly calm Quinn to confirm that the whole thing had been "theater" didn't help. Sure, every good cop needs a bad cop, but may we remind the occupants of the "Homeland" writers' room that every good set piece needs a good lead-in?

And yet, "Homeland," I just can't quit you. First of all, even the ridiculous stabbing was kind of awesome. Who cares that, in the real CIA, Quinn would (hopefully) have been court-martialed instead of being allowed to return to his station five seconds later? Who cares that it makes absolutely no sense -- when you're trying to surreptitiously remove a U.S. Congressman from his environment and then return him a day later without leaving a trace -- to inflict a massive stab wound on one of the only parts of his body that, unless it's snowing, is guaranteed to be visible. I mean, maybe Jess is dumb enough to believe that Brody incurred his injury during a "bender," but what is Roya going to think? Are we just hoping that, as a practicing Muslim, she has never been in a bar fight and therefore doesn't know that they generally don't end with someone getting speared through the palm?

But where was I? Oh yeah, I was going to tell you why this episode of "Homeland" was great anyway.

We'll get to Finn and Dana later, because wow. But first let's talk about the obvious: Carrie vs. Brody. These two diabolical and deformed characters are so mentally acute and emotionally broken that they might as well be alone in their own little two-person world. Sure, there were parts of her sales pitch to Brody that felt phony -- "It's the lies that undo us"? -- but he knew it, and so did she. As usual, they were playing each other and connecting at the very deepest levels. By the time she had drilled all the way into his psyche, I was ready to sign up with the damned CIA. As Saul put it, "She's forgotten more about Brody and Nazir than we'll ever know" (oof, shock-therapy humor), and it shows. Carrie knows that Brody is a divided soul, and when she appeals to his better nature -- "That's the Brody I fell in love with" -- there's nothing phony about it. And then there's her parable of the "two monsters" -- Nazir and Walden. "Between the two of them, they made your life a misery," she says, and you can see Brody digesting that, and beginning to trust her if only because she agrees with him that Walden deserves to pay for his war crimes (even if he probably won't).

Of course Brody gives in, giving up Roya as his contact within Nazir's operation. But what a moment of acting for Damian Lewis. And then the real fun begins, because what's really happening is that we're re-setting the table for this series. As I predicted last week, Carrie and Brody are now teammates, which is going to be insane, because even though she is capable of saying sensible things about how he should pack up his family and move them far away from Washington, she also admitted during the interrogation that she wishes he would leave his wife and kids for her. Oh, and she also wants to use their illicit love affair as a cover story because what could possibly go wrong with that perfectly non-problematic plan?! The best thing is that Brody doesn't even object, likely thinking something along of the lines of, "So I get immunity and I get laid? What's not to like?!"

Then he goes home to Jess, whose attempts to keep the kids calm with fake-smiley promises of "pizza night" have been about as successful as Estes' super-sneaky plan to cover for a U.S. congressman's disappearance by telling everyone he's at some random hotel with the flu. And there, after warning Carrie that Nazir will target his family if anyone finds out about this whole CIA deal and being repeatedly assured that Jess absolutely does not need to know about it, Brody comes right out and tells his wife that he's working for the Agency. I'm sure that will make her feel so much better the next time he skips over to Carrie's apartment for a glass of Sancerre and a quick debrief.

But seriously, what is that about? We know now that Brody is about as trustworthy as Walter White, so it would be naive to think that he's suddenly embraced the opportunity to be honest with Jess. And he has to know how tempting it will be for her to start bragging about her husband's 007 exploits at her next vice presidential function. Is he planning to tell Roya that he's using the CIA as a cover story to explain his Nazir-related absences? And if he does that, then which side will he be serving, really?

But back to Dana and Finn. First of all, as a person who once went to high school and was somehow entrusted with car keys, I knew something horrible was going to happen the moment she said, "Let's have some fuuuun." And wrong it went, with Finn proving that, his slaying charm aside, he really is his father's son -- and Dana agreeing to protect him because, damn, he's just 20 times cooler than boring old Xander. So where is this hit-and-run subplot headed? We've already established that Dana and Brody are secret sharers, so is it possible that she'll reveal the awful secret to Dear Old Dad, only to have him use it to destroy the hated Walden now that Plan A: Mass Homicide is off the table? That would be interesting!

Whatever happens, I'm fairly confident that we shouldn't expect Brody and Carrie to become the next Mulder and Scully. They're both too messed-up and manipulative to team up in any kind of productive fashion.

But what do you think? Am I right that this episode is both staggeringly unbelievable and kinda great at the same time? Am I being too hard on the writers, who, after all, are just trying to make an entertaining TV show and if you don't like it you can always watch "Modern Family," jerk? Were you too busy freaking out about Hurricane Sandy to even watch this week? Let your voice be heard in the comments!