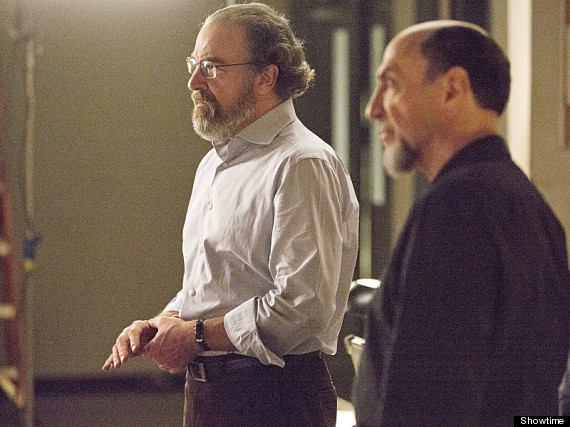 Spoiler Alert: Do not read on if you have not yet seen Season 3, Episode 11 of Showtime's "Homeland," titled "Big Man in Tehran."

After last week's episode, the central question in "Homeland" was whether Brody, in his shaky post-heroin addiction and vulnerable mental state, could be trusted to deliver for CIA while in Tehran. Last night, the answer proved to be yes, but not without several serious moments of "no he isn't!" and shouting at the television from our side. Say what you want about Alex Gansa and the direction of Season 3; the producers still know how to mindf*ck with us every couple episodes.

Several weeks have passed since Brody successfully made it to the Iran-Iraq border claiming to seek asylum as the Langley bomber. Carrie, welcome or not, has arrived in Tehran under some silly French pseudonym in order to manually orchestrate Brody's extraction from Iran once he follows through with Saul's wacky mission to kill the head of the Iranian Revolutionary Guard, Akbari. And with Javadi working secretly in tandem with him, Brody blossoms into a micro-celebrity in Iran, spouting off anti-American rants on government television and greeting locals on the street as they take cellphone photos of him. Saul and Dar Adal and company begin to wonder whether Brody is enjoying his newfound celebrity a bit too much. "Bottom line, he's gone from an asset to a liability!" Senator Lockhart exclaims. The three quickly decide Brody is too high-risk and plot Brody's assassination in order to at least retain Javadi, who has so far been behaving, as an asset.

This is a pattern that Brody has witnessed before. Brainwashed and tortured as a prisoner in Iraq, Brody was given a war hero's welcome upon returning to the States. Likewise, Brody was held captive in Caracas only to be rescued so that he could play a local hero in Iran. But in each case, Brody is playing a part, a marionette for the greater forces controlling him. The Abu Nazir and Saul Berenson comparisons are apt. No wonder the poor guy is so confused.

Speaking of Saul, he spends most of his time growling and pacing up and down the hallways at Langley in this episode. We see him demanding help from Alain, the ex-boyfriend of Mira/Israeli counterintelligence officer, for help on the ground in Tehran. "That's the only reason why I'm talking to the greaseball who fucked my wife," Saul snaps at him, finally releasing some of the anger he's had pent up this entire season. Saul also loses it on Carrie, who repeatedly ignores his commands to leave Iran. As he talks to her from his giant satellite phone, you can almost hear Saul's voiceover from the series' opening credits running in the background: "You're the smartest and the dumbest fuckin' person I've ever known."

After Brody loses his opportunity to kill off Akbari, he is set up with a personal meeting with Abu Nazir's widow, who has been staking out in Tehran since his death. "Nicholas," she says warmly as he stares at her open-mouthed. They proceed to have a semi-forced spiritual conversation about the purpose and life and death, though we know Nazir's widow is actually just trying to discern whether Brody is telling the truth. "When I completed the plan that Allah had set out for me, it was too much for [Dana.] She tried to kill herself. She had faith in her father that he wouldn't betray her like this," Brody confesses to her, which feels like the most honest thing he's said so far this season.

With such an aggressive focus on Dana at the beginning of the season, and with Carrie's growing pregnancy, we wonder if Brody's "redemption" in Tehran is actually more about redeeming himself as a father. Will Carrie -- quite obviously further along in her pregnancy -- give Brody the opportunity to be the kind of father his daughter can have faith in? What on earth has happened to Brody and his son, by the way? It's like Brody forgot he had another child altogether after leaving him to load the dishwasher for the 500th time.

Carrie continues to be an impediment to Saul almost the entire operation. She tips Brody off about the CIA's plan to back out of the operation, and she walks around like a crazy person in Tehran with two cell phones trying to hunt down Brody. She so successfully injects herself in every situation of Brody's that he no longer believes that Carrie isn't meant to be his constant lifeline. So when Brody stands alone in Akbari's office, blood on his hands and armed guards just seconds away from entering the door, Brody does what he's always done: He calls Carrie, and leaves it to her to find a solution. His work is done; Carrie's is just beginning.

What did you think of the "Homeland"'s penultimate episode? Who can't wait to see how Season 3 will end? We're skipping the questions this week, but please sound off about how you think the season finale will play out next week in the comments below.