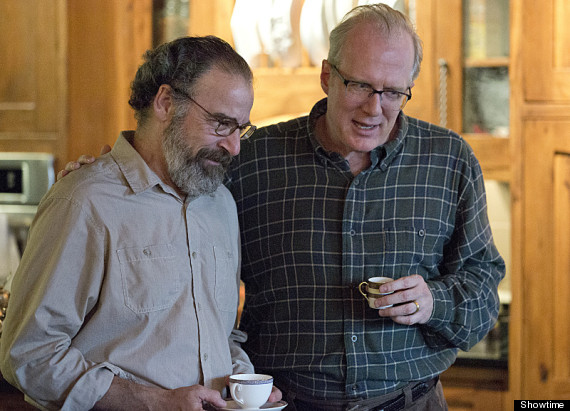 Spoiler Alert: Do not read on if you have not seen Season 3, Episode 5 of Showtime's "Homeland," titled "The Yoga Play".

"Homeland" fans, let's all breathe a sigh of relief. Finally, our beloved Showtime series has delivered an outstanding episode resembling what hooked us all in the first season: taut and suspenseful and offering us an amazing reward for having slogged through the difficult first four episodes of Season 3. Bonus: There's still Dana, but she's not nearly as annoying.

There's a lot to talk about, but let's begin with the opening scene of the show: A mysterious man drives over the Canadian border into the U.S., skinny, polite, saying he'll only be in town for three days. He then quickly changes cars into a more sleek vehicle and is offered a gun. "No guns," he says, but we know this guy means business. This is the Javadi we have been hearing about for this entire season, and Javadi has come to town to greet our very own Carrie Mathison, who told the Big Bad Law Firm Company that she'd only meet with a known terrorist face-to-face, and alone.

Of course, that's been the plan all along. After last week's bombshell revelation that Carrie and Saul had conspired to dangle her as a vulnerable CIA agent in front of Iranian terrorists -- a plan that was hatched in the days following the Langley bombing, according to showrunner Alex Gansa -- our faith in our shaky, potentially mentally unstable CIA operative is firmly back in place. Saul informs a stunned Peter Quinn that Carrie was a "mine" and that theirs was an ongoing operation to outsmart both the CIA and the terrorists, to which Peter says, "Fuck me." We're sure those words were thrilling for the many shirtless Quinn fans out there, but let's move along.

In the meantime, Carrie is under surveillance by not one, but by two groups: by the Iranians, who are watching their potential informant closely, and by Peter, who is watching the Iranians watching Carrie. The situation is complicated by the fact that Carrie again decides to stop taking her lithium, which presents a painful question for the viewer: If Saul cares about his protege Carrie, would there not be a discussion about her very real mental illness? Would he not institute some sort of rule about her mental health, or is he completely hands-off about that situation? We fear that Carrie's decision to stop taking her medication will land her back in psychiatric ward, where popsicle-stick house dreams are created, then shattered.

Carrie is approached by a distraught Jessica Brody, who pleads with her to help her find Dana, who has now been missing for three days with her potentially murderous and crazy older boyfriend, Leo. Their "joyride" has actually been under surveillance by the CIA, but Carrie -- who can't seem to ever say "no" when it comes to anything Nicholas Brody-related -- still undertakes a risky "yoga play" that essentially allows her to drive to Bethesda, MD. unnoticed and confront FBI Agent Hall, who has been monitoring the Brody house. Carrie's most vulnerable when she feels that she is needed, especially when it comes to Brody, with whom she feels she has a preternatural understanding. Her biggest weakness is Brody, not her mental health. Unsurprisingly, Agent Hall is not happy to see Carrie. Carrie is a bad, bad person and he wants nothing to do with her, and her persistence in finding Dana all affirms her reputation of obsession and Brody-stalking (not entirely untrue). We want to think there will be a moment where Carrie's sacrifice -- both emotionally and reputation-wise -- will see a reward at the end of the series, a moment where she is crowned and awarded with the company's top honors, but this isn't high school. It's the CIA, and the CIA is soon to be under a new management that is both unaware of Carrie's secret mission and likely to be unsympathetic to it.

We learn the latter after Saul reluctantly takes part in a snobby geese-hunting trip with D.C. politicians under the impression that he will be promoted to permanent director of the CIA. It's there that Senator Lockhart makes ominous statements to Saul about geese-hunting and it being the last opportunity "to get the big boys" before the season changes, a metaphor of what's about to come. While hunting, Lockhart informs Saul that his strategy of using human spies has been unreliable and tired, and outlines a mission that involves, vaguely, drones and military personnel. Saul stares into the distance and grumbles something to the contrary. Lockhart then informs him that he will be nominated by the President of the U.S. as the new CIA director and threatens him to boot: "This isn't really about tempering your views. It's about changing them if, that is, you want a job, in my CIA." We witness Saul's humiliation in front of his peers as Lockhart's nomination is announced with cheer. But Saul refuses to let him have the last word, delivering a terrifically awkward and wise speech: "A spy isn't sitting in a hide, waiting for the enemy to come onto your guns. They're in the jungle, usually in the dark, with bad information and 'unreliable' partners." He grimly congratulates Lockhart and makes it clear who's still in charge, at least for the time being: "I have two weeks left. Excuse me." [Exits party. Boom.]

The heartbreak doesn't stop for Saul, however, who comes home depressed, only to find his sort-of not-really wife Mira dining with a French hottie at their dinner table. "Saul," Mira says softly, while holding a glass of sexy wine. "I wasn't expecting you home tonight." Can we just give Saul and Mira the award for being the Couple That Speaks The Most Softly To Each Other? When are we ever going to see Saul and Mira have a fight on the level of Carrie and Brody? Are Saul and Mira the saddest couple on television? Who wants to watch a rom-com spinoff series on the couple, "Saul and Mira: The Beginning Years"?

Meanwhile, Carrie is back at home, wondering whether she blew her cover as a turned CIA agent. The Iranians have not been putting her under surveillance since her trusty yoga play, a sign that they're onto her. Peter Quinn is watching her house from afar. And then: Carrie is ruthlessly frisked, terrorized and stripped naked by two men, who pull a bag over her head and bring her to a dark basement where she greets Javadi face-to-face. The whole scenario was downright scary and not unlike Brody's abduction by Abu Nazir last season. "This is not what we agreed to!" Carrie yells, which is just about how we felt when we realized that Carrie would be having no back up in this scenario. Javadi stares at Carrie, then compliments her on her yoga activities. What does this mean? Is he being sarcastic or sinister? Peter calls Saul (still staring at things after the Mira betrayal) and tells him that Carrie has been abducted. "We lost her ... She's on her own," Peter tells Saul, to which Saul says, not without a hint of pride: "She's always been on her own." If one person can hold her own while confronting a dangerous and wanted terrorist face-to-face, it's our girl Carrie.

We get a similar sense of strong female independence, at long last, from 16-year-old Dana. We won't devote too much time talking about television's most-hated character, but Dana and Leo's joyride into the country is aborted after she overhears a news anchor talking about Leo's "suicide pact" with his younger brother while in a gas station. Suddenly her vision of him, and what she's doing, is muddled. "I told you over and over again: The one thing I can't have in my life is lies, and you lied to me!" Dana screams at a distraught Leo in front of a highway, who tells her he only didn't tell her because he wanted to her to like him. She returns home, skinny jeans and ballet flats still on, and proceeds to completely ignore her helpless little brother and hurting mom, and then does this amazing thing with her face where her chin and eyebrows crinkle and her face turns into a huge crumpled ball. Shoot down Dana all you want for being a miserable, self-indulgent teenager, but a bad actress Morgan Saylor is not.

What did you think of "Homeland" Season 4, Episode 5? Share your thoughts and predictions below.