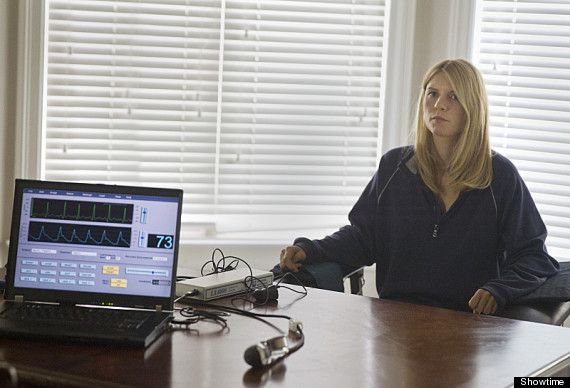 Spoiler Alert: Do not read on if you have not seen Season 3, Episode 6 of Showtime's "Homeland," titled "Still Positive."

If you haven't seen the most recent episode of "Homeland," close this browser right now.

If you have: WHOA. Carrie Mathison and company have always sneaky secrets tucked up their sleeves, but the revelation that Carrie is pregnant is a curveball anticipated by no one. That includes Carrie, who appears to be in denial about her pregnancy, judging by the number of positive pregnancy tests our favorite obsessive-compulsive bipolar CIA agent has accumulated in her bathroom drawer. This being "Homeland," the producers tease us with this information but leave us to wonder: Who is the father? Will Carrie keep the baby? Can the reveal of the baby's paternity please be documented in a "Maury" type talk show ("Sergeant Brody... You ARE the father!")? And if Brody is the father of Carrie's baby, that would mean that Carrie is approximately three months along, if we count back to the last time they had sex (a few weeks before the Langley bombing, either in that seedy hotel room or at the Mathison family cabin). Are we getting too technical here?

Carrie's pregnancy highlights the main theme of this mostly excellent episode, which was family, and the ownership we have over each other as family members. Dana Brody, back from her failed "Romeo and Juliet" joy ride with Leo, is severing ties to her tainted last name. She compels Jessica to allow her to change her last name from "Brody" to "Lazaro," Jessica's maiden name. Jessica is surprised/flattered and allows the change, thinking this will put an end to Dana's suffering. "You seem like a nice young lady. Must have mom to thank for that. I can't imagine what you all are going through. Would you permit me to pray for you," the official tells a clearly disturbed Dana. No matter where she goes, it seems she is a prisoner to the identity her father's apparent murderousness has foisted upon her.

Much to Jessica's chagrin, Dana is hardly finished. She leaves shortly thereafter with a friend, telling Jessica that she needs to move out of the house because her life as a Brody begins and ends in their house. "I can't live this life anymore. I just can't. I mean, it nearly killed me. I've gotta leave," Dana tells her mom, as Jessica runs through the house and gives Dana the last of what little money the family has left. Does Dana's departure from the Brody household mean a temporary departure from the show? Her critics can only hope, but, as many commenters have pointed out, we think Dana's storyline will play a crucial storyline to Brody's return to the show.

Our personal wish, seeing as nobody asked, is for Dana's departure from Chez Lazaro to provide the cue for her brother to step up and achieve full personhood as a character on the show. For much of the first two seasons Chris was a wimpy presence in the shadows of practically every scene in the Brodys' kitchen; for a while there it seemed like his sole function in life was to unstack the dishwasher. This season he's receded even further into the background and is now almost totally blurry every time he appears on screen; last night he made one contribution to the episode, which was to provide some out-of-focus background color to the confrontation between Dana and her mother, and then he was de-blurred briefly so that he could put an emotive little wrinkle across his forehead, give Dana the droopy eyebrows and offer her a wordless goodbye hug. They say there are no small parts, just small actors. But what they don't add is that there are many blurry parts. Chris seems to be living one of them right now, stuck in a sympathetic little booboo zone where his eyebrows are called on to do more than his mouth. This is unjust, to us. With Dana out of the picture, for the moment at least, this might be Chris's turn to come back into focus, both figuratively and literally. It would please us greatly to see him emerge over the back end of this season as someone with a real story to convey -- why not put Chris through an emo punk phase, or have him do something really weird like start developing an interest in antique coins? "Homeland" writers, take pointless, retroactive note: WE WANT CHRIS. [end of rant]

Speaking of Brody, he's mostly yesterday's news. The last time we viewed our fallen war hero, he was shooting up heroin in a dingy cell in a Caracas slum ruled over by El Nino, a man of nebulous intentions with equally as nebulous connections to Carrie Mathison. Despite a mild flirtation with El Nino's daughter, things are looking bleak for Brody.

Instead, the season has mostly become about capturing Javadi, the mysterious Iranian intelligence honcho who drove over the Canadian border to meet Carrie in the last episode and whose arrival has provided a much-needed jolt to our favorite Showtime series. The episode wastes no time setting the stakes high: Javadi has Carrie hooked up to a lie detector machine in a grim basement room, where he grills her about her intentions. Instead, Carrie flips the tables on Javadi: She reveals that he is an enemy of the Iranian state, responsible for embezzling $45 million from the Revolutionary Guard under the alias of the goalkeeper of the 1978 Iranian World Cup team. Under the (false) impression that Peter Quinn and the CIA are surrounding the house, she goes a step further: She reveals her and Saul's operation to snag Javadi was hatched on "twelve thirteen" -- the day after the Langley attack. Javadi, who knows he's screwed, recoils faster than we'd expect for an experienced terrorist. Instead, he makes salty statements about Saul: "He used you to lure me. Saul Berenson, after all these years, still putting other people's lives in front of them."

Carrie is miraculously dropped off in some sketchy woody area apparently close by her house, and she calls Saul to inform him that Javadi would only agree to meet her later. This is where things get a bit complicated with a murky backstory involving Saul and Javadi around the time of the fall of the Shah. For a single episode, it was a lot to pack in: Javadi had agreed to help Saul smuggle four hostages in Iran to America in May 1979, when Iran was in "full revolutionary crisis mode." Saul had given the four hostages his word of protection by the American government. But instead of delivering the hostages to Saul, Javadi shot them in the head -- his entry into the new regime's security services. Saul gets revenge by helping Javadi's wife and son escape to the West four months later, an act that Javadi has never forgotten -- but more on that later.

Essentially the whole flowery backstory serves to inform us that Javadi's capturing is more than Saul doing his day job, but a legitimation of his work at the CIA for the past three decades. If Saul is to be pushed out of the CIA as acting director, damned if he won't finish this last piece of business beforehand.

Meanwhile, Senator Lockhart and Dar Adal conspire back at Langley about Lockhart's transition to the CIA in just a mere 12 days. Just where Dar Adal's loyalties lie, we can't be too sure, but Lockhart mutters some pretty ominous things about no more surprises, meaning no more Brodys, no more Sauls and and no more Carries. We get the point: Carrie and Saul's days at the CIA are numbered, applying pressure on them to act even faster. Adal ambles through the exchange with an air of equivocal malleability, vaguely sceptical and vaguely conspiratorial at the same time, and the ambiguity of his characterization is an example of what "Homeland" as a show does best -- taking superficially innocuous scenes (in this case, the camera lingers on Adal as he pours Lockhart a cup of coffee) and planting seeds of doubts in the viewers' minds as to the exact intentions of the actors in them. Tracy Letts is clearly enjoying himself in the devilishly Cheneyesque role of Senator Lockhart this season; there's more consistently thuggish menace in the twitching of his nostrils and mouth than most actors are able to convey over the course of an entire career. Hand this man's nostrils an Emmy.

The best part of last night's episode is when our CIA dream team -- Carrie, Saul, Quinn, Max, and, inexplicably, Farrah (we were under the impression she was a forensic financial analyst, but some of the scenes show her offering advice on finger-printing cars and other non-financey stuff, and most scandalously of all: WHERE WAS VIRGIL?!) -- reunite to chase down Javadi. He, of course, fails to keep his promise to meet Carrie at their designated meeting point. Instead, he drives to the house of his ex-wife, and proceeds to brutally murder both her and his daughter-in-law (he thankfully leaves his grandson still alive). The scene was difficult to watch, and we're not sure that the broken bottle and all that blood were necessary in order to convey to us the message that Javadi, in his last act as a free man, reclaimed complete ownership of his family by killing them. Where Saul's unfinished business has to do with meeting Javadi face to face, Javadi's unfinished business was making sure his ex-wife paid for escaping him back in 1979.

Saul, who endures his own family drama after Mira admits she has fallen for that French hottie she met in Mumbai, has an amazing knack for acting out ex post facto. When Mira begged Saul to make a decision earlier this season, he did so by giving the green light for Operation Tin Man. When Mira begged Saul to show some emotion and anger after he told her he didn't have ownership over her, Saul declines. But in the final scene of last night's show, he finally gives Mira what we've all been waiting for from television's most soft-spoken character: He socks Javadi straight in the nose. It's a fantastic and somehow deeply satisfying end to the episode, and even though Javadi lacks the nuance, as a character, of Brody (he's simply and straightforwardly evil), and the show seems to have resolved, for now, into a more conventional thriller than it was over its first two seasons, it will still be interesting to see how Saul, Carrie and Quinn handle their new detainee next week. But really, the main question for now is: How much longer can Carrie and Quinn go before they get it on?

What did you think of the "Homeland" season 5, episode 6? Share your predictions below.