Well, if we weren't sure how far things got between Carrie and Aayan in last week's episode, we certainly do now. The two are naked and in bed together at the start of this week's "Homeland." Aayan is like a kid on Christmas morning when he wakes up and sees a naked Carrie next to him. He even goes as far as lifting the covers to sneak a little peek of her goods -- as if the previous night's escapades didn't provide enough of a glimpse -- before she wakes. She does wake up just as he puts the covers down and they share bashful smiles. Carrie dresses, kisses Aayan's arm, and leaves to get them pastries for breakfast. Is this "Homeland" or the start to a really cheesy rom-com?

Quinn and Fara finagle a new stakeout spot in the heart of the city, across from where Fara spotted Haqqani last week. She's feeling extremely uneasy with her new role as a real member of the team instead of merely just an assistant. Quinn provides assurance, as he is so good at doing, and the two embark on yet another watch. Fara uses the downtime during the stakeout to ask Quinn about his friendship with Carrie. The exchange provides this quote from Quinn: "Manipulating people and exploiting their weakness... it can get ugly sometimes." Fara doesn't know the layers to this sentiment, but the rest of us do. Quinn knows Carrie better than everyone and he knows exactly what she's capable of. 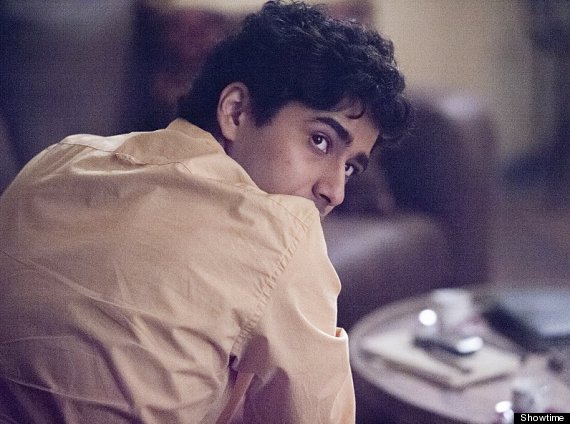 Carrie takes the breakfast break as an opportunity to chat with Saul before he leaves for the States. She insists that Saul relay the information about Haqqani and Aayan to Lockhart upon Saul's return, but warns that Lockhart must keep his mouth shut about it. Saul inquires about Carrie's progress with Aayan and she tells him she's got about three days to get information out of him before he starts wondering why they're not off to London yet. Saul isn't confident about the short period of time Carrie has to get information and makes a snarky remark about it. If only you knew, Saul, if only you knew.

Returning to the apartment, pastries in hand, Carrie finds Aayan readying his things to leave because he's "changed his mind." Carrie uses her crazy to spin a terrifying soliloquy about all the parties looking for and wanting to kill Aayan. She ultimately succeeds in scaring the shit out of him and convinces him to stay. They also discuss the sexual incident from the night before, which Aayan feels guilty about, because OH HEY HE WAS A BIG 'OLE VIRGIN. Carrie assures him it won't happen again. I don't believe her for a second but, whatever, let the boy believe what he wants.

Forced to stay in Islamabad, Professor Boyd concocts yet another lie to his wife, the ambassador, and tells her he's staying after all. Martha is fed up with her husband and knows he's been lying to her. This entire exchange really bothered me because it felt like I was watching a real relationship unravel. Martha is at her emotional wits end and she's trying to hold on for dear life, but Dennis is giving her no reason to trust what she's holding on to. It's all very depressing. Though not as depressing as Boyd is later on when he frantically tries to break into Carrie's apartment and fails. Hmm, suspicious. 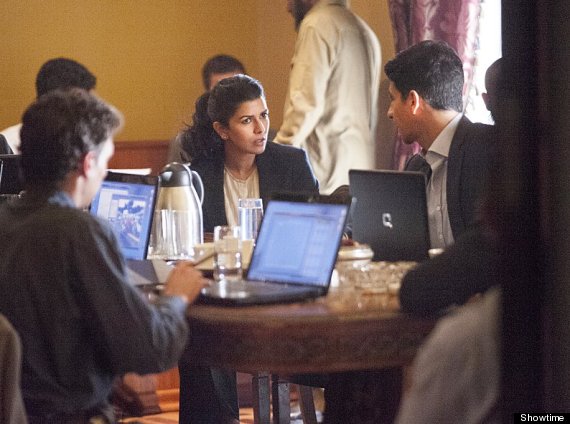 In a somewhat unsurprising plot twist, we find out that the Pakistani woman, Tasneem, that confronted Boyd and the ISI member, Aasar Khan, that Saul met with are in cahoots with one another. When we see them, they are discussing Saul's delay in leaving. They have details on all of Carrie's and Saul's whereabouts, down to every minute and mundane detail. These guys do not mess around and it's not even a question that their intel is going to prove problematic very quickly.

Back with Carrie and Aayan, Carrie starts interviewing him for her fake newspaper piece -- her seemingly innocuous way of getting the information out of him that she wants. She dives right in and asks about his relationship with Haqqani, his uncle. The stories are full of merry nostalgia, tales of a quality uncle-nephew dynamic. Carrie shakes Aayan up when she suggests that Haqqani is still alive, forcing her to pause the interview.

On his way through security, Saul spots Farhad Ghazi in the airport. He calls Carrie only to reach her voicemail and proceeds to run through the airport to tail him. Apparently craving some duty-free goods, Saul follows Ghazi into a shop and then down a corridor to his gate. After Ghazi takes a seat at his gate, Saul calls Quinn and relays Ghazi's flight information so Quinn can have a team on his tail as soon as he lands. 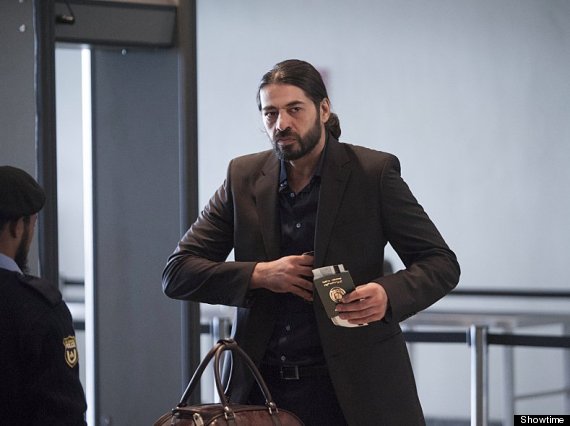 Martha runs around the embassy looking for Quinn, who is still at the stakeout with Fara. Redmond catches her attention and says he'll help her with whatever she was looking for Quinn to help with. The look of mortification has settled on her face when she tells him that her husband is belligerent at a bar and she needs assistance in getting him. Redmond agrees and, yet again, I feel awful for Martha. Her marriage is not only a sham but an embarrassing one at that.

Aayan isn't really down to chat with Carrie after she alluded to his uncle still being alive so she shifts gears and tells him about Franny, her baby. The conversation shifts towards Brody and Carrie almost gets choked up talking about it. I really want to believe she's just airing out her bottled up emotions and not using her personal plight as a bonding mechanism with Aayan, but we all know that she's being her usual manipulating self. After Carrie "opens up," Aayan asks if they can have sex again and wants Carrie to teach him "how to give." Carrie Mathison: CIA agent AND sexual educator. Anyway, the two bone and in the middle of it, Carrie starts crying. Yes, Carrie, that's the way to teach a newly deflowered boy how to handle a woman: cry while he's penetrating you. I can't handle her sometimes. She needs to get it together.

At the bar, Redmond is drinking with Professor Boyd. Boyd is a hot mess, but Redmond's keeping it cool and asking him what's going on that he's so out of it. Just as Boyd is airing his frustrations - vaguely, but venting nonetheless - Tasneem from ISI comes over and greets Redmond. The run-in shakes up Boyd and drives him to leave while Redmond, supposedly unaware of her affiliation with his drinking buddy, is unfazed. Redmond and Martha put Professor Boyd down to sleep after bringing him home from the bar. Martha talks to Redmond about how different Dennis was when she met him and how he has deteriorated over time. She's clearly heartbroken and Dennis himself realizes this as he overhears everything from the couch they put him on.

Back at the airport, Ghazi gets up from his gate and heads to the restroom. Saul watches intently and, after some time, goes into the bathroom to confront him. Almost as soon as Saul enters the bathroom, he is stabbed in the neck with some sort of paralyzing drug and he passes out. (Side note: I'm also just going to say this now -- if they kill Saul, I'm giving up on this show. I can't handle that.) Ghazi pushes Saul out of the bathroom in a wheelchair, positioning him to look like a cripple, and he is taken away by Ghazi's people. Ghazi places a phone call, answered by the same Pakistani woman from ISI as before, and simply says: "It is done."

The stakeout continues and as the cleric they're watching leaves the apartment, Fara and Quinn follow him by car. In need of a drone to get this guy, Fara calls Carrie and, yet again, no one can get ahold of her. The two continue their car chase into Taliban territory, which scares Fara. Quinn scares her more when he asks her to get out of the car and put a tracker on the cleric's car. She fails at her task, forcing her and Quinn to head back to their stakeout quarters empty-handed. In the interim, a border officer checking cars checks the cleric's car and finds a gagged and bound Saul. The scene cuts away without revealing what happens next and I'M INTERNALLY SCREAMING.

Professor Boyd successfully enters Carrie's apartment on his second attempt, using the key Tasneem provided. Liquid courage is real, folks. She clearly wants all the dirt she can get on Carrie and isn't afraid to send this schlub to do it. Boyd photographs Carrie's meds thoroughly as well as other assorted other things. I officially hate Boyd. 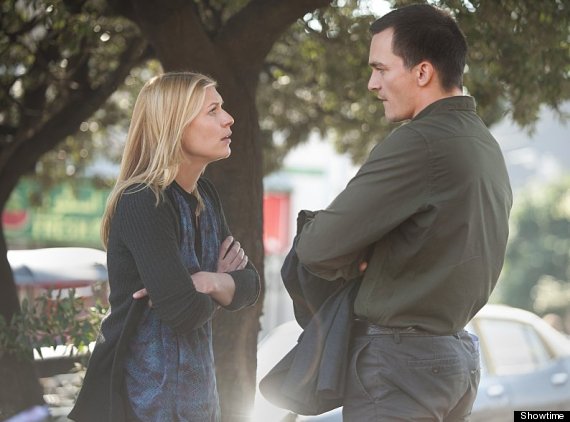 The next morning, Quinn goes to Carrie's hideaway apartment with Aayan and gets her to come outside to talk. He berates her for missing his call about the cleric and Saul's call about Ghazi -- both Quinn and Carrie are still unaware of Saul's capture. He then yells at her for screwing a "child," and Carrie basically asks him to come out and just admit why that bothers him. Quinn doesn't placate her and the two leave each other in a huff. Upon returning to the apartment, Carrie finds Aayan on the roof, looking out pensively. He decides then to let his walls down and tells her that Haqqani is in fact still alive. She doesn't outwardly smug but you can just tell that, mentally, Carrie's telling everyone to suck it. The two embrace and, goddamn, Carrie, you crazy, crazy bitch, you got what you wanted.

Keep up with "Homeland" recaps here every week. "Homeland" airs on Sundays at 9 p.m. ET on Showtime.