After the insanity that was last week's -- and the week before -- episode, the "Homeland" finale begins at a much slower pace. Somber and back in the U.S., Carrie works with her sister to go through their father's things. As they discuss Carrie's mental state, a visitor suddenly shows up to see Carrie: Dar Adal. We all know now that Dar Adal is working with Haqqani -- for reasons hopefully to be revealed -- but Carrie has to play dumb here. He's still the CIA director and she can't let him know she saw him in Islamabad in the back of Haqqani's car. Dar Adal comes to her to discuss Quinn and ask if Carrie knows his whereabouts. She merely tells him she knows he's still in Pakistan and nothing else. 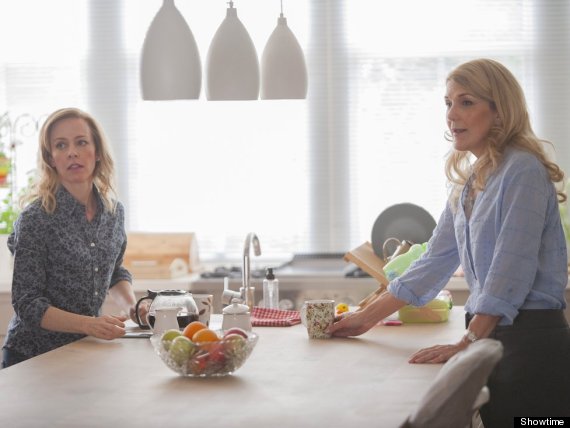 Carrie attempts to be a real mom and takes Franny to the park. While hanging out on a park bench, a kindly man stops by and recognizes the baby because he used to spend time with Frank, Carrie's father. They were "park friends," as Carrie called them. Carrie sadly tells him without telling him that her father has passed away. The moment is tender and very reminiscent of early "Homeland." The moment is quickly shattered by Carrie's return home to find her mother in Maggie's kitchen. Outraged, because her mother has been wholly and completely absent from her life for the past fifteen years, Carrie refuses to hear anything the woman has to say and forces her out, against Maggie's will. Their mother drives off, leaving me (and other viewers I'm sure) confused as to why they decided to bring this character into the mix after all this time. Hopefully, they'll make sense of this later ...

Safe at home with his wife, Saul watches Tasneem on TV renounce any and all alliance with the United States. Frustrated, he leaves for a meeting at the CIA headquarters. In the meeting with Joe, Saul and he discuss what went on in Islamabad. The video Haqqani made of Saul is inhibiting the CIA's ability to appoint him to any specific position and because they don't know if and when he'll release the video, Saul is in a precarious spot.

After the Mathison matriarch leaves, Carrie and Maggie chat about their mother and her abrupt return. Maggie is much more sympathetic to their long lost parent but Carrie cannot wrap her head around the madness of her life lately and doesn't want to deal with her mother on top of it all. The two daughters let it go and their father's funeral is the following day. Carrie reads a beautiful and emotional eulogy for Frank. The scene is a great depiction of the sorrowful routine we all go through in life. Post-church, Carrie is hugging respective family members and sees Quinn in the distance. Magically, he's returned from Islamabad! The two reunite and hug. Quinn tells Carrie that Astrid, his German embassy friend, helped him get home. Carrie tells Quinn that Dar Adal came looking for him and the two agree that he needs to stay as far away from Dar Adal as possible. 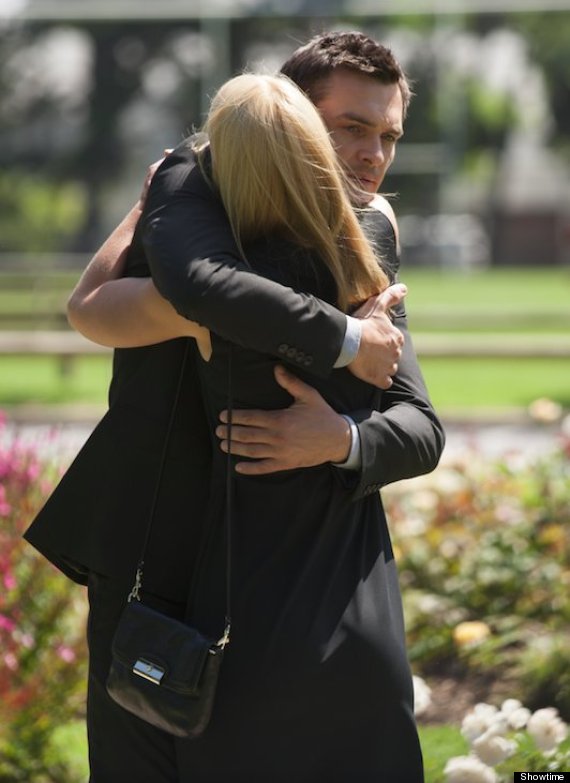 The reception for the funeral is back at Maggie's. Carrie pulls Saul over to discuss what to do about their knowledge of Dar Adal being in the car with Haqqani. They agree to keep the information to themselves. Quinn interrupts their conversation with whiskey and the three of them sit in the yard and drink for the remainder of the evening, later joined by Lockhart. The pacing of this episode is much slower and it feels very real, relatable. Every family knows what it's like to deal with a death amid the chaos of the rest of their respective lives. It's hard to bring any one thing into focus, even though you have to.

At the end of the night, when the guests have gone home, Carrie and Quinn's relationship finally blossoms into something more than just intense attraction. Carrie walks Quinn to his car and the two share a passionate kiss. Carrie stops them and explains why it wouldn't work but Quinn insists it will. The two are both experiencing the same PTSD-esque symptoms after their drama in Islamabad and have seen each other at their worst. I hate that I agree with Quinn because I think he's such a better character at his core than Carrie but frankly, he'd be the best guy she's been with this whole series so they might as well try it out, right? He tells Carrie to consider it and he leaves.

That night, Carrie can't sleep so she treks into her father's room and starts going through old photographs. The ache of her mother's most recent visit is clearly still sore as she pauses on images of her parents together. The mental rendezvous to her parent's past prompts Carrie to leave for an impromptu road trip to visit her mother the next morning. She wants to look her mother in the eye and ask her why she left. Carrie arrives in Missouri at what appears to be midday. She goes to her mother's house, only to be told by a young man that she has gone off to work at the school. Carrie shanghais her mother on the school playground and finds out that the young man is her half brother. "You left your children to go off and have more children?" Carrie exclaims and I can't help but want to half laugh, half gasp at the ridiculousness of that truth. The two women agree to reconvene at 3:30 to talk and the elder Mathison goes back to work.

Quinn has moved back into his apartment complex from earlier this season and seems to be in better spirits. He's visited by a CIA friend, Rob, who tells Quinn about a mission they need to leave for the following morning. His happy mood quickly shifts and he says, repeatedly, that's he done, he's out. Rob does little to try to sway his opinion and get him on board. After everything in Islamabad, I can't say I blame him. However, Rob does a great job at guilt-tripping him and leaves Quinn with letters to deliver to families if the mission goes poorly. 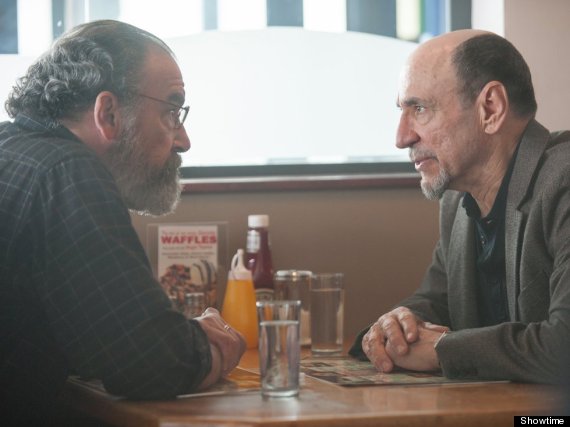 Saul meets with Dar Adal in a diner and they discuss Lockhart's imminent resignation. Dar Adal says he can get Saul's name into consideration for Lockhart's replacement and before Saul can offer his rebuttal, Dar Adal produces a memory card. The card is allegedly the only copy made of Haqqani's video of Saul -- the one that would (and could) eliminate any chance of reviving Saul's career. While it's great that Dar Adal has this, it's more disturbing than anything else. Saul asks how he got this and Dar Adal says he made a deal with Haqqani: he'd take Haqqani off the kill list, if Haqqani agreed to not harbor terrorists in Afghanistan. Saul is beyond perturbed -- rightfully so, Haqqani is a terrorist and Dar Adal should not be even remotely working with him. Nonetheless, Dar Adal attempts to seduce Saul back into the agency's hierarchy. Saul is clearly skeptical.

The emotional roller coaster that is Carrie and Quinn continues as the two chat on the phone before Carrie meets with her mother. Carrie airs our her stress and grievances and Quinn tells her he's thinking about nothing other than her. Carrie says she can't make a decision just yet because she's emotionally fraught with everything else that's going on in her life. Quinn feels like she's saying no, and says that to her but she insists it's not a no and tells him not to rush her. You can see the frustration on Quinn's face. I'm not sure he's prepared to keep waiting.

After Carrie's mom gets off work, Carrie and she chat in her house about the past. Carrie learns that Tim, her half-brother, is 15, and that her mother was quite wanton in her younger years. Apparently, her mother cheated on her father many, many times and her father had spent the rest of his years without her mother hiding this fact from his children. Carrie reveals that she was diagnosed bipolar after a breakdown she had in college and the revelation shocks her mother. Hurt and realizing that the relationship is irreparable, Carrie leaves her mother and heads back to her hotel room. She immediately moves to call Quinn and finds his cell number has become unreachable. Carrie calls Dar Adal and leaves a message asking where he is. Ugh, no, Quinn, why?

Predictably, the reason Quinn is unreachable is because he has suddenly decided to take up the command issued by his friend Rob and leave for the mission. Clearly, he wasn't prepared to keep waiting. Quinn arrives at the leave site and taps out his replacement, handing him the envelopes Rob had given him the day before ... with one more addition on the top: a note to Carrie. 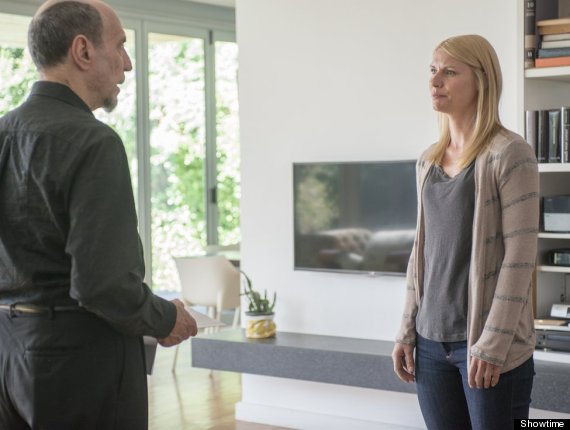 At Dar Adal's, Carrie shows up unannounced, demanding to know Quinn's whereabouts. Dar Adal says Quinn is somewhere on the border of Turkey and Syria, unsure of exactly where, and that he won't be hearing from him again. The mission Quinn's been sent on is open-ended and he (and his men) are in charge of their own extraction. Carrie's furious that she cannot speak to Quinn and insistent on getting what she wants, she tells Dar Adal that she saw him with Haqqani in Islamabad, that she's prepared to go to The Washington Post with the story if he doesn't agree with her commands. He tells her that she can't do that because she doesn't know what's at stake. Carrie disagrees and says she does because working with Haqqani means dishonoring all the men whose lives were lost at his hands and that Saul would agree with her. Dar Adal says he's not so sure and opens his back door to reveal that Saul is there, meaning he's agreed to Dar Adal's earlier proposal for moving up in the ranks. Perhaps the right move career-wise, but morally, Saul, you're really disappointing everyone right now.

The episode ends with Carrie driving aimlessly as she presumably tries to process everything that's happening in her insane life at the moment. The season ends with a bunch of cliffhangers. What's going to happen to Quinn? Why the reappearance of Carrie's mother? Is Dar Adal not telling us everything? This season far surpassed expectations and packed a lot of punch (right in the gut, most of the time) in every episode.

Keep up with "Homeland" recaps every week.