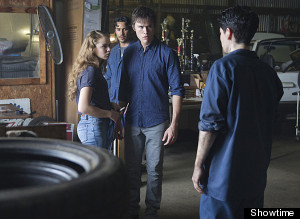 Do not read on unless you have seen Season 3, Episode 4 of "Homeland," "Game On."

I ask that question in all sincerity, because as I watched "Game On," I spent much of the hour asking myself, "What is this?"

Sunday's episode wasn't just iffy in certain areas and truly awful when it came to the young lovers on the run, it was disappointing in ways that may have serious implications for the future of the show. "Game On" wasn't just a one-off episode that didn't work; it came across as the unfortunate culmination of a series of bewildering decisions.

The Saul-Fara plot, which moved along the core CIA story in an efficient if impersonal way, wasn't problematic. But everything else in Sunday's episode made me think "Homeland" no longer prioritizes the things that made the show fascinating in the first place.

Whatever happens, can we please not make this about Dana? If we were going to hang Season 3's failings on a character, that dubious honor should go to her boyfriend, Leo, who has supplied us with the dopiest storyline in the brief history of "Homeland." But the show's problems are not just about Teen Runaway Dana or Awful Leo. They are much bigger than that. In its third season, "Homeland" has tried some new things -- which isn't always a bad idea. But there's a big difference between the desire to change and executing unfamiliar moves effectively.

Everyone has their own opinion about what makes "Homeland" tick, but here's mine: It's about people who wonder if connections can be trusted. Can one individual rely on another? Is a connection between an organization and an individual real? What is the nature of honesty and truth in a polarized and fractious world? "Homeland" often works best when it acknowledges that the people who investigate terrorism and who are affected by its results aren't always sure of the connections they think they see. They are driven by a willingness to believe, yet a tendency to doubt.

The best moments in "Homeland" have relentlessly explored the aching, perilous journeys of people who continually ask two questions, personally and professionally: "Is what I see and think real, or is it all in my head? Who can I really trust?"

That's pretty meaty stuff for any ambitious drama. But throughout Season 3 -- and in Sunday's episode in particular -- the show seemed determined to ignore, downplay or bypass those themes. The connection between Dana and Leo is uninteresting in the extreme, and the revelation that Saul and Carrie had reaffirmed their bond off-screen ended up making that story line feel like a hollow trick.

In any case, the tenuous, even fractious nature of the relationships on the show is often what makes them interesting; it's easy to be invested in the story of two people who aren't sure if they can trust themselves or each other. Why saddle us with a couple of teens who are sure they are perfect for each other? As I said in my Season 3 review, that kind of infatuation is fascinating to those involved, and predictable and boring to everyone else.

In any event, why would anyone think Dana-Leo would work as a parallel to Carrie and Brody's unstable bond? Yes, bad choices and rebellion run in the family, etc., but we don't know enough about either young character to care about what they do, and the leaden lines they uttered in "Game On" did not help matters.

Several critics have noted that at the end of Season 2 and into Season 3, "Homeland" appeared to decide that it wasn't about fractious relationships complicated by trust issues, but about Doomed Romance. Despite the rocky last third of Season 2, I had been willing to give the show the benefit of the doubt as Season 3 began. I wanted to believe that the claims weren't true, but the extensive evidence is hard to ignore. I guess it's appropriate that, as has happened so often on this show, giving the benefit of the doubt to an unstable entity may well blow up in my face.

One of the problems with the Dana-Leo relationship is the fact that they arrived almost fully formed as a couple. We do have proof that Dana's relationships don't have to be turgid and annoying: Last season, her budding relationship with the vice president's son, Finn, was actually kind of interesting. We got to see what two junior players in the power set made of the choices their families had made. Seeing the adults' morality through the eyes of their kids has occasionally provided powerful contrasts on the show, and if anything, I wish "Homeland" had done more with that couple before embroiling them in the mildly jacked-up hit-and-run plot.

At least we got to see Dana and Finn get to know each other a little. That kind of character development -- in which smart, self-defeating people tentatively lean on each other -- has been one of the show's strengths. We saw Carrie and Brody's halting, combustible partnership develop on screen, after all. We witnessed their first meeting and observed sparks flying whenever they were in a room together. We saw them ask themselves: "Is this connection real or is it a game? Is it both?" For a long time, the intimacy of that connection -- one which implicated us as eager voyeurs -- was the fascinating dark matter at the center of the show.

I don't particularly care that the show has kept them apart. I do have a problem with Season 3 going so far afield with such meager results, and I do mind "Game On" draining its main story lines of tantalizing depth or meaningful mysteries.

A few shows in television history have been able to depict the intensity of adolescent pain and teen relationships with depth and heart and wit. "Homeland" is not one of them. Absolutely nothing about the Season 3 depiction of Dana or Leo has made me even slightly interested in the emotional states they are experiencing, separately or together. Four episodes into the season, Leo is still a douchey cipher, and the introduction of the idea that he may have killed his brother struck me as a very cheap and tacky manipulation. "Switched at Birth" -- a good teen soap -- would never try anything quite that clunky and shameless.

[Sidebar: Morgan Saylor is a capable actress, and absolutely none of these problems have anything to do with her skills -- it's the writers and producers we should be looking at.]

Moving on to Carrie and Saul: That may have worked for you, in which case, that's great. It didn't work for me; not even the beard could make me buy what the show was selling. I didn't believe for a second that Carrie would betray her country, but to be proved right only made me question the elaborate mechanics of the episode. Ultimately, the "big reveal" at the end reminded me of the kinds of tiresome things "Dexter" would do in its later seasons. ("Oh no, Dexter's in danger! But wait, thanks to things we didn't show you, he actually isn't!")

Yes, I can conjecture about what happened off screen: The most likely explanation is that after Saul saw a drugged-out, institutionalized Carrie at the end of Episode 2, he reconsidered his role in what had gone down. Presumably he and Carrie, at some point, dreamed up a secret scenario in which Carrie would get recruited by Iranian interests, even as Saul had Dar Adal continue to destroy Carrie's life. But why did the Bear take Carrie back into his furry embrace, and how did she learn to trust him again? Those are fascinating questions, but I have no idea whether "Homeland" is interested in the answers.

In any event, certain actions by Carrie don't make much sense if she knew that she was definitely getting out of the mental hospital. If Carrie has known that for the last two episodes -- or even one -- why show various scenes of her distress? Why was she desperate to brush her hair and apply makeup before her hearing? Why the phone call to her dad? Was that all acting? If so, who was the audience for that performance?

Presumably her father and her lawyer were already well aware that she wanted to get out of the mental hospital and didn't need to have that reinforced. More mechanical questions: She really had contact info for Tequila Guy -- the ultimate one-night stand? And if she knew she would score a job from the shady lobbyists, why steal money from Tequila Guy? Not even the appearance of Virgil, one of my favorite characters, could distract me from the dissastisfaction that percolated through me as I watched that story unfold.

Good reveals, however surprising, have a sense of elegant and satisfying inevitability to them, but the conclusion of "Game On" felt awkward and off. Update: According to an interview that executive producer Alex Gansa gave, Carrie and Saul hatched their scheme even before Season 3 began. I cannot tell you how disappointing that is to hear -- to know that everything we saw happen to Carrie this season was part of an elaborate charade. It's literally unbelievable. That revelation makes me even more convinced that Season 3 rests on a foundation of extremely unfortunate decisions.

As for what's next, much of Season 3's forward movement -- what little there's been of it -- has felt driven by expediency. Isn't it a little convenient that the mysterious people who recruited Carrie just happen to have ties to the Iranian operative Saul is tracking, and that both the Carrie and Brody threads lead to Venezuela? If the season was working for me, I wouldn't care about the tidy convergence of those stories so early in the game. As things stand, the third season already has an air of pallid anticlimax about it.

Next week, some of the questions about Saul and Carrie's rapprochement might be answered, and someday Leo might evolve into something more than a superficial contrivance. Honestly, I don't see the latter happening; I dread seeing what happens next on that front, though I have more hope that the Carrie-Saul story can be gotten back on track. I have a feeling some people will bail out on the show after "Game On," but I won't: I'm in too deep with these characters (well, those who aren't Mike, Dana and Leo. Come on Chris Brody, save us all, I'm begging you!).

In all seriousness, at this point, "Homeland" looks as though it's committed to a new set of causes, including quite a few I don't care about at this stage. I know that "Homeland" is unstable and changeable, but I can't escape the feeling I'm seeing it start to really go off the rails. I very much hope I'm wrong about that.