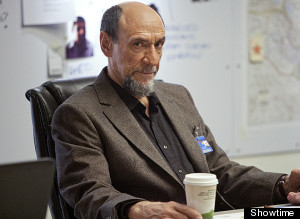 The drama is clearly trying to reinvent itself this season, and the question hanging over the proceedings is whether it's adjusted its course in a wise and productive manner or fallen down a rabbit hole. Viewers may end up feeling like spies waiting for the right piece of intel: We won't know until we know.

The melancholy, even mournful atmosphere of the season's first two episodes often feels appropriate, given that the show has frequently driven its fans into states that the word "lather" doesn't accurately capture. These contemplative episodes, which are only occasionally punctuated by brisk action or charged exchanges about spy games and dirty tricks, may be encouraging us to take a few deep breaths and not get worked up into Carrie Mathison-style frenzy too early in the game. And the low-key tone is also the show's way of signaling that Season 3 is not exactly business as usual, which may well be good news: As executive producer Alex Gansa said in a recent interview, "Homeland" can't cycle at the same high intensity forever.

Another reason for a quieter start: "Homeland" is trying to convey the sense of loss the characters are feeling after Season 2's explosive end and the emptiness that swirls through their lives after the exit of Nicholas Brody, last seen heading into the wilderness at the Canadian border. Just as the characters have to grapple with the idea of Brody's collusion with terrorists (which he denied before going on the run), the show has to struggle with the space his absence creates and find new dynamics to replace the ragged, unpredictable collisions of Brody (Damian Lewis) and the equally damaged Carrie (Claire Danes).

Yet questions keep creeping into "Homeland" 3.0's quiet places and empty spaces. Why didn't the show just kill off Brody (a question asked even by Lewis)? I've got nothing but admiration for the actor's galvanizing performance, but he's not the only one to wonder whether the audience's patience with the former Marine has an expiration date. Having him absent from these first two hours is a wise move, but if Season 3 doesn't feature the Brody endgame, the show could be heading in a "Dexter"-like direction (which is the scariest thing I could say about a drama I love).

Also, when will the CIA, its ranks admittedly thinned by the recent blast, start to seem like a place where more than four people work (and by people, I mean characters who get more than a few lines)? There's nothing wrong with more screen time for Saul Berenson (Mandy Patinkin), but only one new character of note is added in Season 3, which leaves the intelligence ranks still looking a little paltry. Peter Quinn (Rupert Friend) is still around, but he's a closed-off guy who is almost defined by the fact that we don't know much about him.

And then there is the most insistent question that kept intruding as I watched these episodes: How many people spent the months since the Season 2 finale saying, "I wonder what's up with Dana?"

Inspired by the demented yet illuminating number crunching on display in this analysis of screen time for various "Game of Thrones" characters, I totaled the number of minutes Episodes 1 and 2 spent on the Brody family (and most of the Brody time is really "The Dana Show"; the mind of Chris Brody remains more enigmatic than that of Abu Nazir). Minus credits, recaps and opening sequences, about 30 percent of those two episodes is spent on Dana's problems and her relationship with a new boyfriend.

Here is the description of Dana (Morgan Saylor) from Showtime's own press kit: "the sullen, abrasive and rebellious daughter." Those are the only three adjectives used, and I wouldn't call them inaccurate.

I'll be the first to agree that the Brody family should be allowed to process their loss and work through their feelings of betrayal and confusion. That could be fascinating, but in these two episodes, those scenes often seem vague and tentative. "Homeland" could be trying to draw a parallel between Nick Brody's questionable life choices and his daughter's, but there'd have to be some spark to the latter for the parallel to come alive. As it stands now, Dana's adolescent angst and first love are like adolescent angst and first love everywhere: Fascinating to those who experience them, much less interesting to everyone outside those cocoons.

The Brody family dynamics were compelling when they shed light on what it was like for a traumatized, secretive man to desire and occasionally experience intimacy, but the first two seasons didn't do much to make Dana and Jessica specific, compelling figures in their own rights. That's not a comment on the show's fine cast, which has proved itself more than able when given challenging material; that's just an acknowledgement that "Homeland" had many other priorities and more fertile areas to explore in the previous two seasons.

Ultimately, it's hard not to wonder what "Homeland" would have been like had it mostly or fully cut the Brodys loose at the end of Season 2: In a show about the distance between extremes, maybe radical reinvention would have worked best. I'm always willing to be wrong, and there may be a storytelling goldmine hidden somewhere in that modest brick house, but so far, the homefront story feels less than vital.

I'll admit it's hard to be hard on this new season of "Homeland," which comes across at times like a newborn foal on wobbly legs. There are some shaky elements -- a new hardness to Saul that can feel jarring and off, slightly wonky attempts to insert Quinn more deeply into the narrative -- that perhaps are to be expected in a show that's trying not to replay its greatest hits.

And "Homeland" still has its pleasures, most notably F. Murray Abraham as Dar Adal, a relentless CIA pragmatist whose needling of Saul -- with whom he is engaged in an epic beard-off -- remains a thing of beauty. Dar Adal's wolfish grin is never reflected in his flat, merciless eyes, and his relationship with Saul, who both needs him and fears his capacity for betrayal, is the third season's brightest spark by far. Also doing fine work is Tracy Letts as a senator whose grandstanding public prosecution of the CIA's missteps forms the focal point of much of the first two episodes.

Though Danes' cry-face has become an Internet meme -- and the volcanic extremes of her range remain transfixing -- it is the subtlety of her work that has struck me this season. There is a moment in the first episode when she is contemplating the guilt she feels about the CIA bombing: She looks down, and her face is a tight, haunted mask of pain. It only lasts for a second, but Danes can do more with her face in a moment than most actors can do with a full page of dialogue.

Much of the new season revolves around questions of autonomy and responsibility: How much responsibility should Carrie bear for the CIA bombing? Did the medications she took for her bipolar condition cloud her judgment, and who gets to decide how she treats her disease? (Patient-directed care is all well and good, but Carrie's tequila-heavy lifestyle may not be as healthy as she thinks it is). And is it fair for the CIA to allow lower-level employees to be railroaded by a Senate subcommittee intent on taking somebody down? The underlying questions at the heart of the show are still strong and relevant: What are people, and institutions, allowed to do in the name of survival?

More than ever, Carrie's situation mirrors that of the show itself. How much autonomy is "Homeland" allowed? Has the show's commercial and critical success bound it more tightly to a narrow set of options? Will it be as free as "Breaking Bad" or "The Shield" or "The Sopranos" to drill down relentlessly into the very marrow of human frailty?

Ultimately, this season will tell us whether "Homeland" is willing -- or able -- to blow it all up.

Notes: HuffPost TV's Maggie Furlong talked to Damian Lewis about Season 3. Update: Here, on iTunes and below, there is a Talking TV podcast in which Ryan McGee and I discuss "Homeland" and "Masters of Sex."

TV Couples Who Make Us Believe In Love