WASHINGTON -- When the I-35W bridge in Minneapolis collapsed in 2007, a specially equipped urban search and rescue team based in the Twin Cities responded immediately, precious hours before a unit from Chicago could arrive.

And when a devastating tornado destroyed Joplin, Mo., in May, a mobile command vehicle based in Kansas City rushed there to help coordinate the response.

In every case, federal grant money intended to help urban areas plan, equip and train for a terrorist attack was used to respond to the non-terrorist emergency. Now, a decade after the Sept. 11 attacks, deep cuts in funding for the Department of Homeland Security's Urban Areas Security Initiative (UASI) threaten to leave those cities and dozens of other smaller population centers without the money to maintain programs into which the federal government has already sunk millions of tax dollars.

It's already happened in Tucson. In October, the city shut down the reverse 911 notification system paid for with UASI funds. Police have advised residents to check for alerts on Twitter -- even though most don't use the social networking site.

Advocates for continued funding warn of a not-too-distant future filled with mothballed, broken and outdated equipment; unemployed and expensively trained intelligence analysts; and fewer training exercises for first responders. A recent report by the UASI managers group argued that the federal government has "an equity stake" in improved local and state radio communications, information sharing, hazardous material response and regional planning and that it is not in the interests of taxpayers to see them "wither and eventually evaporate over time."

"Whether it's a bridge collapse or a skyscraper coming down, a natural or man-made disaster, tornado or terrorist -- it's the same kind of response," said Bill Anderson, a Minneapolis emergency manager who heads the National UASI Association. "It's crazy that DHS would bring people to this level of preparedness and then cut them off and walk away."

But others are pleased that Congress has cut spending that they say has spiraled out of control.

"UASI funding should be directed to those urban areas at greatest risk, not spread far and wide to satisfy each mayor, governor or congressman's inherent desire to have the maximum amount of homeland security funding," said Daniel Kaniewski, deputy director of the Homeland Security Policy Institute at George Washington University and a former official in President George W. Bush's White House. "The budget reality in Washington requires that scarce federal resources be allocated according to risk profiles, not wish lists."

Until recently, Congress has granted the wishes of emergency managers from Bridgeport, Conn., to Oxnard, Calif. Since 2003, the UASI program has handed out $6.5 billion -- most of it initially to 10 "Tier I" metro areas considered at the greatest risk of terrorist attack: New York, Washington, Los Angeles/Long Beach, Chicago, Houston, the San Francisco Bay area, Jersey City/Newark, Philadelphia, Boston and Dallas/Fort Worth.

"Everybody and his brother got a shiny new command vehicle, a communications van, patrol vessels, fire and police boats," said Eric Holdeman, former emergency manager for Seattle and the surrounding King County. "It's going to be very hard to sustain a lot of these."

Especially now. In the 2011 budget, Congress cut 33 "Tier II' cities from the program, including Providence, R.I.; Omaha, Neb.; and Sacramento. Buffalo, Syracuse, Rochester and Albany were zeroed out in New York state, leaving only New York City in UASI.

More cuts are expected in 2012. Under the recently passed spending bill for DHS, state and local grants will be reduced by about $1 billion. The remaining $959 million in homeland security grants will be divvied up among at least nine different programs covering everything from port security to emergency medical response.

The legislation specifies that Homeland Security Secretary Janet Napolitano allocate no less than $100 million for "areas at the highest threat of terrorist attack." Joshua Filler, a former DHS official who helped create UASI, recently wrote that while it was "reasonable" to assume that money would go to urban areas, Napolitano has discretion to distribute it "according to threat, vulnerability and consequence."

Napolitano isn't expected to announce a decision until late February. But many observers expect DHS will shrink the program back to the original 10 metro areas. That would leave Atlanta, Baltimore, Denver, Miami and Seattle among those left out in the cold, with smaller metro areas already feeling the sting of budget cuts in areas such as bioterrorism preparedness.

Democrats have railed against reduced funding. Rep. Brian Higgins of Buffalo has said the cuts pose "the potential of creating gaping holes in regions making significant contributions to our national security."

Anderson and other UASI managers have asked Napolitano to allot $600 million for urban area grants, including $60 million for "sustainment and preservation of the capabilities developed over the past decade" in cities no longer eligible for funding in 2012.

But the Government Accountability Office and critics in Congress question the value of UASI grants. They say there has been little research into their effectiveness and even less oversight. Many point to millions in "unspent" grants sitting in city coffers, despite the fact that cities are given three years to spend grant money for services or equipment that has yet to be delivered.

Rep. Peter King (R-N.Y.), chairman of the House Homeland Security Committee, whose Long Island district lost more than 150 constituents on 9/11, has said it is time to stop spending money on low-risk regions of the country and instead concentrate increasingly scarce resources on big cities that remain the main targets of terrorists. Rep. Robert Aderholt (R-Ala.), chairman of the House Appropriations homeland security subcommittee, also defended the cuts, arguing that "more government and more spending does not necessarily equal more security."

"It never made sense for these grants to turn into permanent subsidies," said Benjamin Friedman, a research fellow in homeland security studies at the libertarian Cato Institute. "If states and localities think they need more emergency response capability or port security or whatever, then they ought to pay for it themselves. They have a better sense of what the relative priorities are."

NOT JUST NEW YORK OR WASHINGTON

Supporters of continued funding point out that Osama bin Laden had been urging his followers to target smaller cities when he died and that recent terrorism suspects grew up or lived in American suburbs. They insist it is naive to think state and local governments walloped by the recession can fill the gap left by a cutoff of federal funds.

Before 9/11, counterterrorism was almost exclusively a federal issue. Today, in part due to federal homeland security grant programs like UASI, every state and 22 major urban areas have fusion centers, where analysts from local, state and federal agencies sift through and interpret threat data. Several big-city police departments, most controversially in New York, have set up their own intelligence divisions. The infusion of federal money also has contributed to an unwelcome militarization of police departments, which have bought Army-style armored personnel vehicles to use for crowd control and drug sweeps.

Despite some questionable purchases, Filler, the former DHS official, pointed out that UASI funds have played a small but critical role in securing cities against man-made and natural disasters by giving them "certain exotic capabilities they could not otherwise afford." New York's bomb squad used a UASI-funded remote-controlled robot to handle a car bomb in Times Square. Minneapolis has blasted federally funded sirens to warn of impending tornadoes. Miami purchased a fireboat to handle emergencies on cruise ships in its port.

By far the biggest chunk of UASI funds, $1.2 billion, has gone toward interoperable communications that allow first responders from different jurisdictions to talk to each other during emergencies. The 9/11 Commission report cited construction of wireless networks as a top priority, and major cities such as New York, Chicago and Los Angeles have deployed systems with help from the federal government. But smaller cities are still playing catch-up and worry funding cuts will reverse the progress they've made.

New Orleans was one of the first UASI cities to upgrade after a lack of interoperable communications during 2005's Hurricane Katrina hobbled rescue efforts already struggling with the wholesale destruction of electrical networks and cell towers. Since then, new national standards for public safety communications have been introduced, but the city was cut from UASI in 2011 and doesn't have the $36 million it needs to upgrade its equipment, said New Orleans' UASI project manager, Robert Williams.

Bob Maloney, director of the Mayor's Office of Emergency Management in Baltimore, said his city spent $10 million in UASI money to build compatible regional communications with enough redundancy to work even if part of the system is knocked out. But with Baltimore on the list of cities that could be cut from the program and with Maryland facing a projected 2012 budget shortfall of $1.4 billion, Maloney doesn't know where he will find the $850,000 he needs each year just to maintain the system. "It's disastrous," he said.

"Everything has a shelf life. People retire, equipment fades," Filler said. "Investing in these capabilities and then to turn it basically off is to guarantee you're going to lose the capability over time. The reason the feds invested in these in the first place is that they knew state and local governments couldn't do it and needed it."

To Holdeman, who blogs about disaster management, the drawdown in homeland security funding a decade after 9/11 parallels the tale of the federal government's Cold War civil defense program. All the fallout shelters stocked with food and water "just kind of wasted away," he said, as the threat of nuclear annihilation waned. "The U.S. mentality is not one of sustainment," Holdeman said. "We don't have the persistence to maintain a long-term effort."

Tim Johnstone runs the central California fusion center, a multi-agency operation that covers 34 counties from the Oregon border to Bakersfield. It not only collects and synthesizes information but trains intelligence analysts and police who handle community outreach to religious and ethnic minorities. One-quarter of the center's $2.4 million operating budget comes from UASI, but that will run out in 2013 because Sacramento was dropped from the program in 2011. Unless he can find an extra $850,000, Johnstone will have to lay off analysts and cancel training.

"It is time we reprioritize and stop buying gas masks, mobile command vehicles and fire trucks, and focus on prevention, education and information sharing in a sustainable model," Johnstone said. "These cuts will take us backwards [to] a time that is as dangerous threat-wise as prior to 9/11."

Friedman, the Cato researcher, isn't worried. "The odds of a terrorist attack in most parts of the country, even in most urban areas, are so low that I don't think [UASI is] a particularly good investment," he said.

That attitude is taking over, Holdeman warned.

"Advocacy for homeland security will continue to dwindle -- until the next attack," he recently wrote. "20 years from now emergency managers will tell their children and grandchildren about the heyday of homeland security funding from 2003-2010. At Christmas they will relate how the money flowed in great streams, nay rivers of funding. There were trucks, mobile command posts, bomb robots, chemical detectors and all sorts of suits. It was a wonderful time of toys for boys."

WATCH a slideshow of cities that could lose homeland security funds: 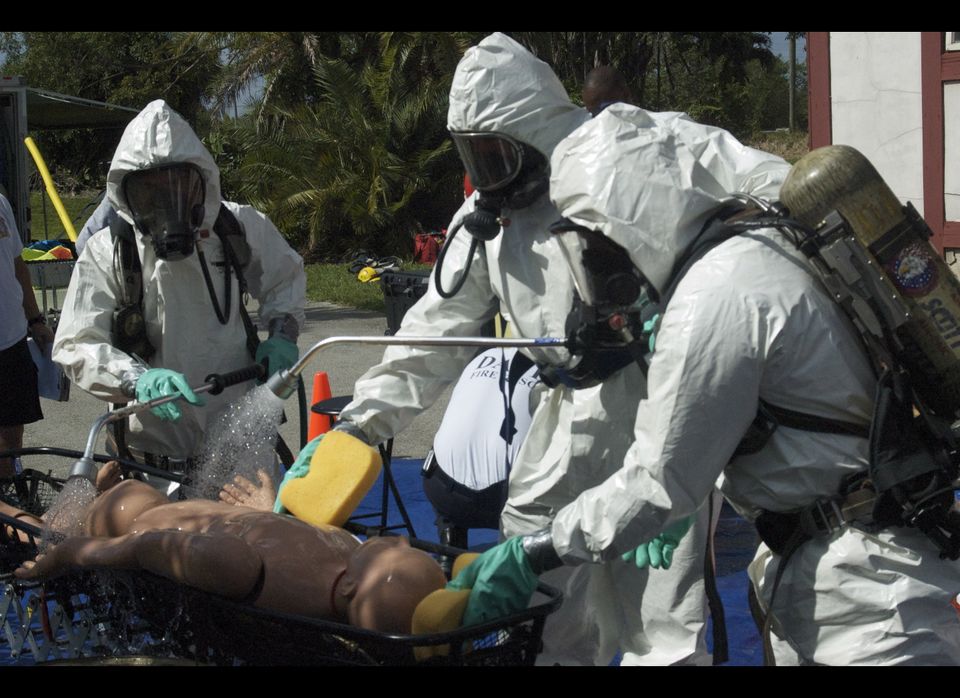