I hate to get into a game of semantics here, but I have been "home"-less for the past 18 months.

It's not that I am insensitive to the plight of people actually living in the cold and on the streets, and it is not that I am trying to take away any sympathy and empathy reserved for those in that actual position because anyone who knows me knows that is just not the case. I am not in poverty, I am gainfully employed, and I am lucky to have a comfortable life. I did have a roof over my head all along.

Therein lies the problem with semantics because for what seemed like an eternity, I have been without a real home. My comfortable home life was thrown into topsy-turvy chaotic conditions for the past 18 months while I was in transition due to a flood on Memorial Day 2015. My home flooded (read these blogs) and I am just now back in my own place and getting settled where my familiar things surround me.

The dictionary definition of home (as a noun) is: the place where one lives permanently, especially as a member of a family or household.

My transitional period included flamping; (a rather uncomfortable condition described here, and surrounded by mystery boxes of non-accessible things -- those both necessary and luxurious) and it included time in a rental home.

Here is a photo my husband snapped of me with the backdrop of no walls so you can see what we lived in. 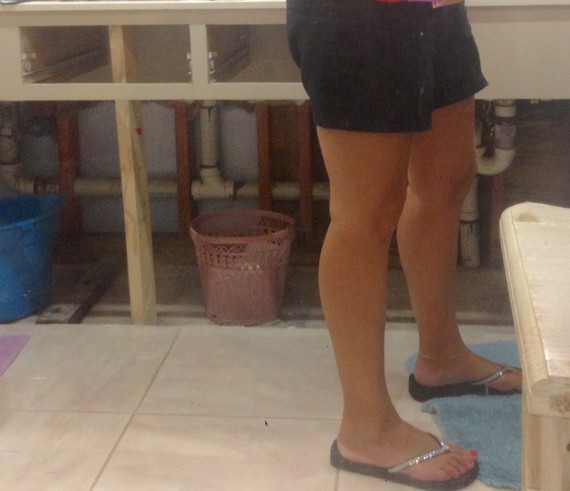 The rental home was fine, but again, I was surrounded by boxes of things that I could not unpack, knowing another move was imminent, and it was not my home -- my permanent place -- but a temporary shelter. I made it as homey as possible and realized I unpacked too much, requiring still more packing for the last move.

My husband and I took the very long and arduous road of demolishing our flooded out, totaled home, and building a new, raised up structure (to prevent future flooding) that took 18 1/2 months (many of those months with double living expenses) because it took that much time in settling the insurance, getting architects plans, getting permits and approvals, securing funding and financing, and actually getting it built. This meant two moves, (and three pack ups and one and a half unpackings) and that was so incredibly hard and wearying on our aging bodies.

This might have been an exciting adventure for a young couple, but my husband and I are in our sixties, and it was neither exciting or easy on either of us. The stress from the events took a toll of our health and our relationship at times. It was 18 months of non-stop work (giving my husband kudos on doing the lion's share of the house overseeing) while working full time.

All of the well meaning people who told me how much fun I would have decorating and designing, normally one of my very favorite things to do, were dead wrong this time: there was no fun involved in staying in budget with extreme time pressures, and with my career job taking priority over my time. (Oh and there was a little thing extra such as planning my daughter's wedding during the past year. Some of my closest friends who saw me juggling all the decisions, pressures, financial strains, and the like called me heroic for managing it all.)

"All happy stress!" people exclaimed who heard all I had going on. My body and my doctor who diagnosed my severe rash due to "stress," definitely could not tell the difference between "happy stress" and regular stress.

Despite there not being any fun involved in the planning, execution, and transition of the whole process, I am now looking at my new house with different lenses at the end of a very long tunnel. I am admiring my surroundings, just recently completed, and after having been reunited with things boxed away for 18 months, I am appreciating them all anew.

I am finally feeling like I am really at home. I am home again at the address I longed to be at for the last 18 months. I am home in a smaller, but pretty house, with a big yard just begging for new vegetation, (since everything was destroyed in the demolition) and manically unpacking so I can finally, finally, finally feel settled. I long to host, to entertain, to extend myself in a way I have not been able to do for so long.

This journey has been hard to describe to people, as I am one of those kinds of people who usually faces adversity with a stiff upper lip. I received a ton of support and empathy from so many family members and friends, and from our community. Yet, feeling unsettled, wandering, drifting, for 18 long months took its emotional toll as would be expected.

During this past year and a half, I would drive into my old neighborhood, and look into different homes as I passed through. A simple thing like lights on and furniture in place in any of the various houses at night would give me a picture of a family inside, settled and content. I would seethe with envy on some really bad moments that made me ashamed for that emotion. I just so wanted to be one of those settled into home and hearth people in those anonymous houses in the worst way for so very long.

Cheesy sayings such as "All the comforts of home" became the most meaningful catch phrase to me as I understood why that expression even exists.

Admittedly I had way too much stuff, and I had to pare down as we lost lots of belongings in the flood, and downsized our house size, requiring tons of donations of even more stuff. Yet, I really missed some of my more sentimental stuff. While recently unpacking boxes, it was like Christmas morning unwrapping things and seeing them for the first time in 18 long months. I even spoke to some pieces, "Oh how I've missed you." I know that sounds kind of materialistic and crazy, but try not having your things around for that length of time and see what happens.

Like Dorothy in "The Wizard of Oz," my long journey was filled with trauma, yet it taught me to never take for granted being in a home and the feeling of being settled. A weather event, like Dorothy's tornado, and my flood, can sweep a home away just like that, so each day must be appreciated.

Now feeling grateful and fortunate, among familiar things once again, like Dorothy I find myself repeating constantly, "There's no place like home."

Read my regular blog at www.arlenelassin.com.