Masha, a homeless cat, saved a baby from freezing to death by cuddling the baby. 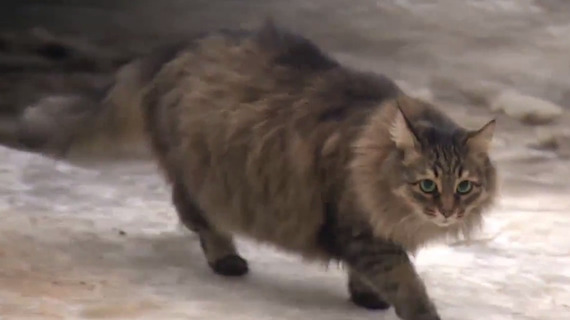 Masha came across the baby boy, reportedly less than 12 weeks old, in a cardboard box on the streets of Russia. The cat climbed in to cuddle the baby and also meowed to get the attention of anyone who could hear.

"The baby had only been outside for a few hours and thanks to Masha ... he was not damaged by the experience," a hospital spokesman told Central European News.

Irna Lavora, a nearby resident who often looked after the cat, discovered Masha and the baby.

"She is very placid and friendly, so when I heard her meowing, I thought that perhaps she had injured herself," Lavora said. "Clearly her mothering instincts had taken over and she wanted to protect the child."

Upon discovery the baby was rushed to the hospital and deemed healthy. Masha did not want to leave her new found friend and tried to get in the ambulance. Residents have reported the cat waited on the street for hours to see if the ambulance would return.

Masha now is being spoiled in her town for being a hero.

Humanity has a lot to learn from animals, and while we may never be perfect we can learn many valuable traits from animals like Masha.