I walked through the streets of New York City where incessant noises stand as the backdrop of everything that occurs. "You don't know what it's like to be homeless!" screamed a voice painfully, breaking the indistinctiveness of noises, "I hope it never happens to you! I am just hungry." The woman was responding to a man who had berated her and her plead for money. He had shouted something degrading without looking at her and continued to walk undisturbed.

I hope it never happens to you. The words echoed in my mind as I walked down an entire block.

I hope it never happens to you.

The determined voice in my head insisted on a response, like a nightmare interrupting my sleep or a crying baby pleading for human warmth. I had just been confronted by the other, and that other engaged me with compassion rather than anger. She did not reproach me. She just wished me well. She had called me, named me, and demanded I turn around.

As I walked back to the woman, I recalled the homeless in Harvard Square. How often do we pretend to be busy on our cellphones so that we do not have to engage? How often have we heard, "Can you spare some change?" and avoided the gripping eyes of a person in need, pretending the words fell on inattentive ears? With our actions, the most visible humans in the streets become the most invisible ones in our hearts.

Yet, the woman in New York did not respond to this human neglect with anger; she responded with compassion. She extended it to the man, to me, to everyone around her. Where, I wondered, in the midst of her hunger, did she find the energy and love to show it? Sometimes, the ones who need compassion the most are the ones most willing to extend it.

"May I buy you something from this restaurant?" I asked.

I soon learned she could only have soup because she had lost all her teeth. I soon learned she had not always been homeless, that amidst economic struggles and distressing circumstances, she had lost everything and had no one to turn to. "We are a landscape of all we have seen," once said Isamu Noguchi, Japanese American artist and architect. If we ignore those gripping eyes, what landscapes and narratives are we missing?

I am not suggesting we give money to all homeless individuals or that it is our duty to feed everyone around us. It is our response-ability, however, to recognize the humanity in others. The man did not have to say something disparaging to the woman. He could have simply looked at her and said, "I'm sorry." We do not have to ignore a 'good morning' or 'hello' from homeless individuals. We can choose to smile and wish them a good day. Sometimes, recognizing the humanity in others is worth more than what money can buy.

Shelley recognized the man's humanity -- his vulnerability and the possibility of his homelessness -- and she extended compassion. That Thursday afternoon, as I walked to the subway station, I wondered how much compassion Shelly would extend the rest of the day. And how much she would receive. 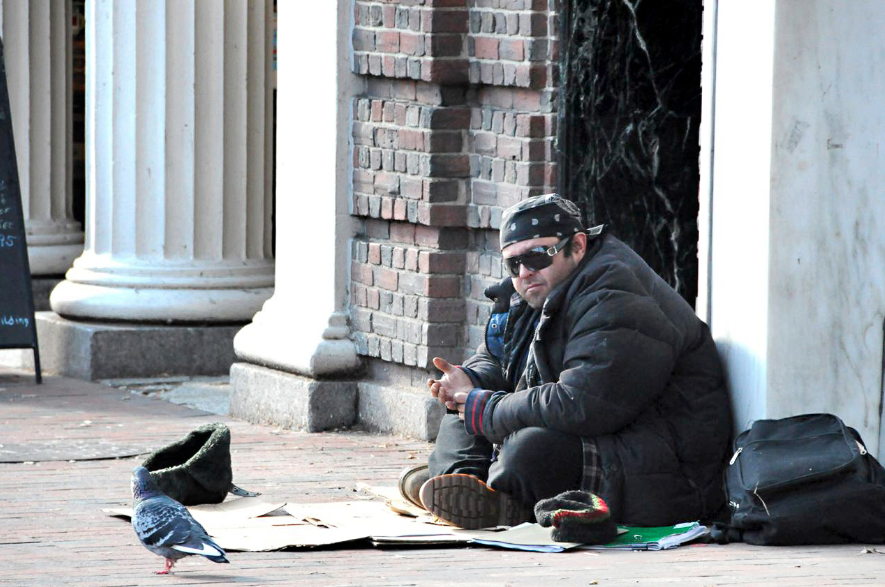