Over the past few weeks I have been meeting with homeless LGBT youth. Each young person was, at the time I met with and photographed them, struggling to survive out on the streets as they waited for one of the few youth shelter beds in New York City to open up to them.

Their stories do not fit in the traditional narratives of the holiday season. No warm family gatherings for these kids. No presents, no feasts. No "sleeping in heavenly peace." Many have been cast out of their homes, driven out by homophobia. Made to know that being LGBT makes them unlovable in the eyes of their families. Made to know that being gay made them disposable.

Nor do their stories conform to the traditional narrative of "coming out" that the LGBT community likes to tell. Coming out for these kids was not primarily experienced as liberating and freeing, nor was it experienced as finding acceptance in the broader LGBT community. For these kids, coming out meant being driven from their homes, denied love, denied all economic support, made to suffer utter destitution. And, shamefully, despite the numbers of homeless LGBT youth across the nation reaching epidemic proportions, their plight has not been at the forefront of the attention of the LGBT community.

And their stories certainly belie the notion that the citizens of our city, state, and nation can find some safety net to protect them. I noted with sorrow that, as I was photographing these abandoned children on the piers and streets along the far West Side of Manhattan, I could often gaze upon the Statue of Liberty downriver, with its promise:

Give me your tired, your poor,
Your huddled masses yearning to breathe free,
The wretched refuse of your teeming shore.
Send these, the homeless, tempest-tossed to me,
I lift my lamp beside the golden door!

Alas, there has been little political will to protect these kids. In New York City there are merely 250 youth shelter beds funded by the city and state, though there are 3,800 homeless kids, 40 percent of whom are LGBT. Both Governor Cuomo and Mayor Bloomberg have sent the distressing message that these kids do not have any right to be sheltered, with the governor having cut New York State support for youth shelter beds by 50 percent in the last year, and the mayor having repeatedly attempted to cut youth shelter funds in half, as well. How fitting that these kids, whose desperate conditions speak so profoundly of unjust economic priorities, so frequently found refuge with the Occupy Wall Street movement when they could not find a shelter bed.

To be a homeless LGBT youth in New York City means battling the cold, desperate to find somewhere warm and dry at night, knowing it would be a catastrophe if your shoes and clothes get wet. It means being exhausted, suffering chronic sleep deprivation as you try with little success to rest on the subways and train stations and on the streets. It means being terrified, afraid that the police will kick you out of the subway cars and train stations, afraid of violence when you have to sell your body, afraid that you will be beaten or robbed while trying to sleep on park benches or under bridges. To be a homeless LGBT youth in New York City all to frequently means being hungry, forsaken, alone, brutalized.

Is there a more terrible expression of homophobia in our times than tens of thousands of teens being cast out of their homes and made homeless in our streets? How horrible it is that kids are made to experience such brutal abuse, just for being who they are? I believe that these youths are, without ever intending to be, unsung heroes of the LGBT movement. They are heroic because of the terrible price they pay for their honesty.

I thank all of the youths who told me their stories, and allowed me to look into their eyes and photograph them. It was courageous of them to do so -- for many teens being abandoned by their family and becoming homeless is experienced as humiliating and shameful, something you don't want people to know. I hope that we will care enough to listen to the devastating stories these kids have to tell. I hope that we will have the courage look into their hurt eyes. I hope that by doing so, we can find the compassion and resolve to protect them.

Every young person deserves to be loved. If so many LGBT youths are denied love by their families, then the LGBT community needs to give them love. We need to assert their human worth and value, despite actions by their families and their government that speak to the contrary. We cannot allow them to be left to fend for themselves in the cold.

Click here to find out how you can help and for more information on the Campaign for Youth Shelter, which is calling on New York City and New York State to commit to a plan to provide shelter to every homeless youth.

PHOTO GALLERY
Homeless For The Holidays
Download
Calling all HuffPost superfans!
Sign up for membership to become a founding member and help shape HuffPost's next chapter
Join HuffPost 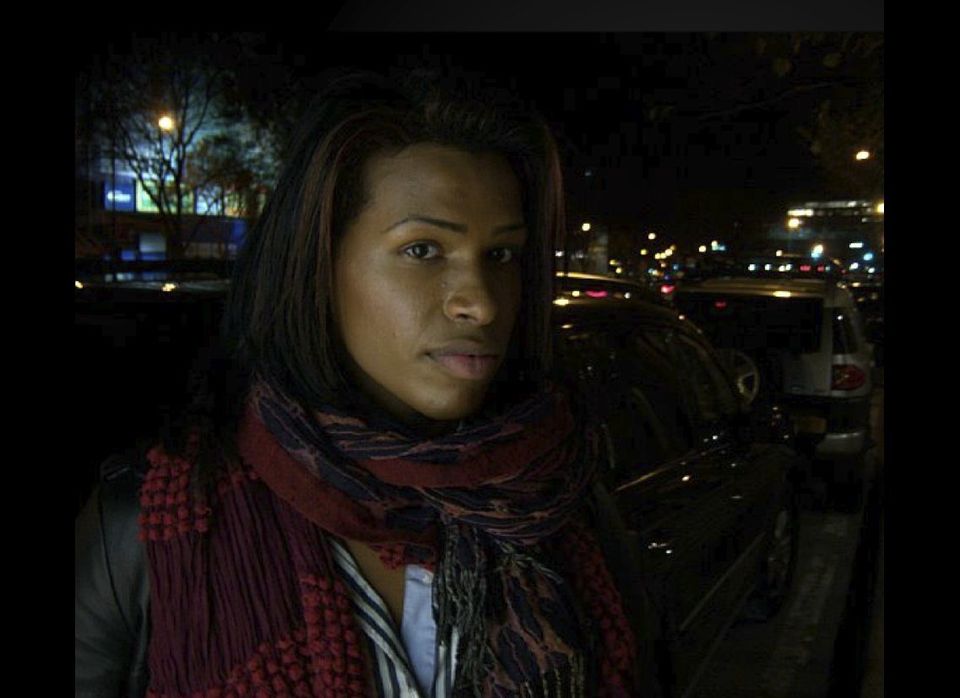 1 / 10
Paris
I grew up with my mom in Brooklyn. I came out to her when I was 15. She wasn't happy with it. My friends told me it takes two years for your parents to get OK, but two years went by and she still wasn't OK. She attached all the negative stigmas to being gay. Doing sex work, having AIDS. She was always saying I was going to get AIDS. I wasn't even sexually active! I didn't lose my virginity until this year. I began doing research on transitioning. When I told my mom, she said, "I gave birth to a boy, not a transvestite." She wasn't cool with it and got more and more angry. One day she said she was going to leave me. I thought she was joking, but three days later she packed up and moved. She told me I had to vacate the apartment that day, and left me $40. I was so shocked! For the last six months I have been waiting for a shelter bed to open up. I walk all over the city at night until I get really tired, so I can hope to fall asleep on the subway. I try to sleep on the trains until the workers throw me out. It feels horrible to live like this. You feel like you have nobody on your side. You think of your mom, and you think of someone always on your side. I try not to think about it because I'm like, "Oh my God!" I try not to get down when so many people are already down on me. I try to be inspirational. I'm going on job interviews and am working on my music. I want the world to see who I really am. And when I get a lot of money, I want to open a drop-in center for other kids.
Carl Siciliano