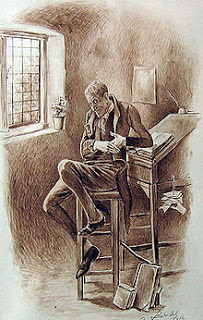 You've seen him on the N or the R, thin with jaundiced skin and cropped gray hair. He humbly apologizes for interrupting but he hasn't eaten for two day and has prostate cancer too. He offers his services, as a Mr. Fix-it, though he doesn't look in any condition to fix anything. When no one responds he says now that I've helped you, I'm asking you to help me. He asks for food or spare change and still no one responds. He's actually playing Uriah Heep, but when no one appreciates his umbility, he drops the guise. He faces the lot of every premeditated extemporizer and standup comedian. Improvisation can fall flat, especially when it's rehearsed too many times and when decibel level replaces true spontaneity. Perhaps they're not hearing me, he must be thinking since he now starts to interrupt a pair of woman who are deep in conversation, the guy whose head is hidden in his Times and a young girl plugged into her headset. Your heart might have gone out to him, if he weren't so threatening and insistent. You identify because you've overstayed your welcome or written that e mail to someone who hadn't responded to your query. Under the guise of getting a fair shake, you've become a stalker and you know what it's like to find your spiel fall flat. You know how it is when the audience, whose favor you want to curry, walks out on you in the middle of your speech. However, it's particularly hard to harangue strangers for food and money and he looks disconsolate and beaten as he walks out of the car at the next stop, totally unrewarded for his effort. You watch him entering the next car with his plastic bag of belongings in his hand. The curtain is about to go up; the spotlight (in this case the fluorescent light of an MTA train) is turned on the figure at the mic, as he shores up his courage and prepares for the next act.