About a year ago, my friend Mark Putnam became director of the Committee to End Homelessness (CEH) in King County. I was excited and impressed when he recently announced that in just one year, the number of chronically homeless people in King County has decreased by over 30 percent.

This is a significant milestone because it shows that by targeting specific sets of needs with effective, tailored strategies, it is possible to move the needle on a seemingly daunting goal. As Mark told me, "This shows that it's possible. It gives us hope that homelessness is solvable, that we can end homelessness."

There are several different homeless populations, each one requiring varying approaches to prevention and repair. Chronically homeless people -- defined nationally as individuals with a disabling condition who have been homeless for over a year, or at least four times in the past three years -- have the most complex needs, but the most evidence for a solution. The answer, according to Mark, is permanent, supportive housing.

There has been a lot of great press around the nearly eradicated chronic homelessness in Utah, which has made people wonder if such a feat can be accomplished in other areas. It looks like Seattle is determined to prove that it can make similar strides.

One study in Seattle found that a Housing First program in the 1811 Eastlake building resulted in $4 million of taxpayer savings in just one year of housing 95 individuals, compared to the medical and social services costs associated with those men and women living on the streets. Mark is optimistic that we can further continue this decline in chronic homelessness. Another supportive housing location with 97 units is being built in the Interbay neighborhood of Seattle, and King County just received federal funding to house 230 additional chronically homeless people in the private market.

The biggest question I had for Mark was this: How can more people help with CEH's goal of making homelessness rare, brief and a one-time occurrence? Here are a few ideas:

LandlordsIf you are a landlord or property manager, think about renting to homeless or low-income tenants. Programs like the One Home campaign in King County provide financial and social services backing to mitigate the risk of renting to individuals with an inconsistent employment history or lack of references. Public supportive housing alone cannot meet the demand, so the private market must contribute to these housing needs. One landlord I talked to had found great satisfaction in being able to help this struggling population.

Advocates There are several housing initiatives that you can support. Here in Washington State, the Washington Low Income Housing Alliance has many opportunities for advocates to work on projects that Mark and the CEH believe will help make the goal of ending homelessness a reality. And on a federal level, the National Alliance to End Homelessness provides the opportunity to stay up-to-date on advocacy opportunities and offers suggestions for other ways to help. Awareness and support are critical to keeping the momentum going to reduce chronic homelessness in areas like Seattle and Utah, and will provide the foundation for introducing this supportive housing approach in more places. 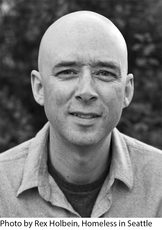 Perhaps the biggest impact comes from people like Mark, who are making it their mission to find a solution to homelessness. Mark has dedicated his career to nonprofit work, and it's inspiring to see the significant changes stemming from his efforts. "I feel like homelessness is the civil rights issue of our day," Mark told me. "I think people who are homeless are often overlooked and judged in a similar way to people of different races and sexual orientations. I think it's just wrong in a society like ours that has as many resources as we have, that we have so many people that have so little -- that are literally dying on the street."

We need more people who are not just aware of the homeless crisis in our cities -- and in our country at large -- but who are driven to think about solutions and move them forward. As Mark said, simply put, "Homeless people need homes."