New York City and Los Angeles have vastly larger homeless populations than any other cities in the country. But while most of New York's homeless population is sheltered, the same can't be said about Los Angeles. Just take a look at this chart. (You'll have to scroll all the way down to see where they fall.)

The above chart was created by data visualizer Seth Kadish analyzing statistics from the U.S. Department of Housing and Urban Development. The data is somewhat limited because it's based on "point-in-time" estimates recorded on a single night in January 2013.

Patrick Markee, senior policy analyst at the Coalition for the Homeless, credits New York's low rate to the state's "strong tradition of shelter and legal protections for the homeless."

Climate, of course, does influence shelter rates. But Markee pointed out that even in states with seemingly warm climates, risks remain. Florida is ranked as the most dangerous state in America for the homeless, according to the National Coalition for the Homeless, due to the high number of hate crimes committed against the homeless in the state.

"You can still die of hypothermia in Los Angeles," Markee added.

On the whole, New York State does a much better job sheltering its homeless than most other states: 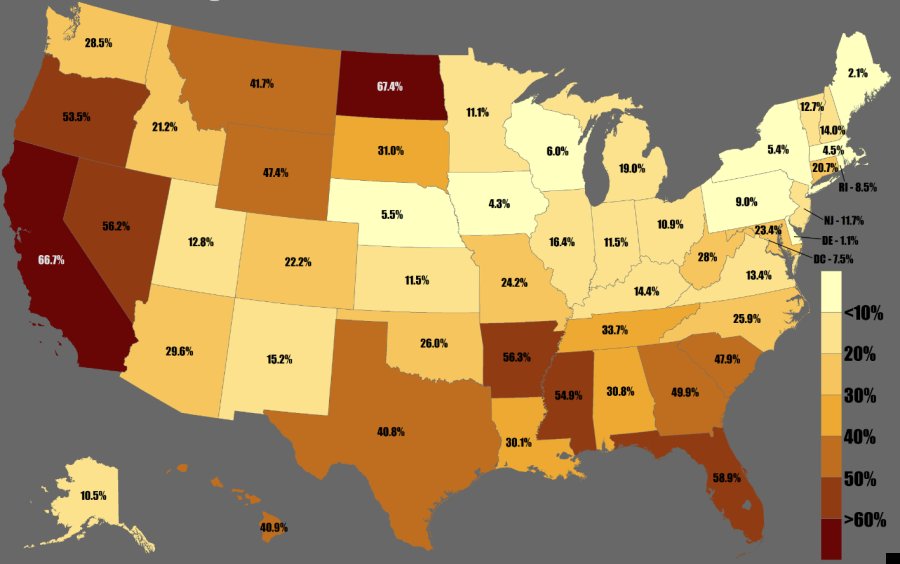 Markee pointed out that the data portrayed in the map may be a bit more optimistic than what's really out there because of how difficult it is to tally the total number homeless people not in shelters.

"For a lot of us working on the ground, we see that the numbers don’t match," Markee said. "It's an undercount."

The number of homeless families in New York City has increased by a staggering 84 percent since 2002, according to research by the coalition.

Unfortunately, automatic spending cuts enacted by Congress, better known as sequestration, are making things worse. The Department of Housing and Urban Development estimated in March that 100,000 homeless individuals would be removed from their current housing or shelter programs. The data the map above was collected in January 2013, before sequestration cuts began taking effect.

1 / 18
Kelly Clarkson
Before getting her big break on "American Idol," Clarkson lived out of her car after her LA apartment burned down. She allegedly showered daily at a health club where she had a membership.
Getty