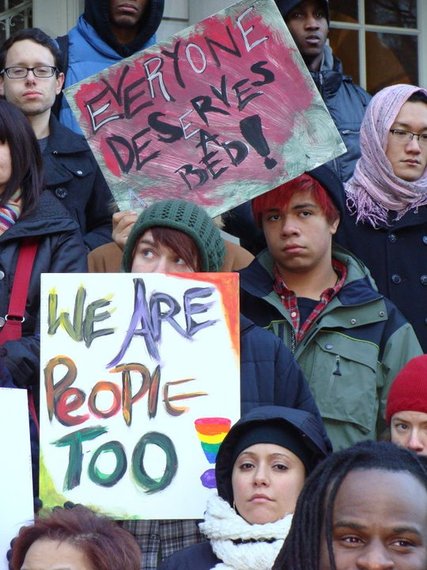 At the first Christmas the infant Jesus was homeless. There was no room for him at the inn. And this Christmas hundreds of thousands of teens across our country are homeless. There is no room for them at the shelters. Today I ask you to think of the many frightened teens sleeping under bridges, on buses and subways, and in abandoned buildings in cities and towns across our nation.

At the Ali Forney Center, the nation's largest organization dedicated to housing and supporting homeless LGBT youth, we are witness to a national tragedy and a national disgrace. Scores of LGBT teens who have been driven from their homes by rejecting parents flock to us from across the country. When they become homeless, the overwhelming majority cannot find a shelter bed.

Last year over 500,000 unaccompanied youth experienced homelessness ("unaccompanied" means that they were on their own, without a parent or guardian), and some 40 percent of them were LGBT. Of those 500,000 youth out in the streets, fewer than 50,000 were able to find a shelter bed. In this, the wealthiest nation on Earth, hundreds of thousands of teens are stranded in the streets, alone and terrified, forced to make it on their own. All over our country there are vastly more homeless kids than there are beds where they might find shelter.

I have been talking with homeless kids from all over the country, asking them to help us understand what it means to be left on the streets, asking them to give witness to what they endure. I ask you to look into their traumatized eyes and listen with me to their heartbreaking testimonies. I have listened to kids talk of having nowhere safe to go and having to resort to sleeping in forests, buses and subways. They have spoken, with devastating honesty, of being forced to sell their bodies for sex in order to get a roof over their heads. They have described being terrified in the dark and cold, with no means to provide for themselves, and helpless to protect themselves from being prey to those who would exploit and brutalize them.

How can it be that our country won't allocate the resources to shelter these kids? How can it be that we provide no safety net for teens who cannot depend on their families? How can we allow our kids to suffer so terribly, and to have their lives be at risk?

A great many youth left out in the streets will end up incarcerated and/or suffering from HIV/AIDS or serious mental illnesses as a result of the physical violence and sexual assaults that they endure. Simply from a cold cost-benefit perspective, it is insane to leave them out in the streets. It is vastly less expensive to provide a kid with shelter than it is to imprison them or treat them for HIV/AIDS.

But what about the moral perspective? Isn't one of the clearest signs of a society's moral decency how it treats its young? How can we not tremble with shame at the spectacle of hundreds of thousands of teens left without shelter in the streets of the world's wealthiest and most powerful nation?

The Ali Forney Center is joining with the National Coalition for the Homeless to bring together LGBT advocacy groups and homeless advocacy groups. In the coming months we intend to launch a national campaign demanding that no child be left in the streets without shelter. We intend to demand that there be a public commitment to protecting all teens from the terrors and harms of homelessness, replacing the sad, token efforts that currently exist. With LGBT youth enduring homelessness at eight times the rate of their non-LGBT peers, this is clearly an LGBT issue. With so many of our kids thrown to the streets, our movement must make it a priority to protect them.

In order for such a campaign to have any hope of succeeding, there must be public outrage at the plight of these homeless youth. My hope is that we will look at the reality of what these kids endure and be deeply ashamed, and that we will be motivated to demand that our collective resources be used to shelter them.

So please take this first step of listening to these kids. Open your heart to what they are telling you about their suffering. And please share their stories. Share them on Facebook. Share them with your friends, at your schools, at your churches. Share them with your elected officials. Help us wake up our nation to the national disgrace of youth homelessness. And join us in asserting the truth that no child should be left to fend for themselves in the street.