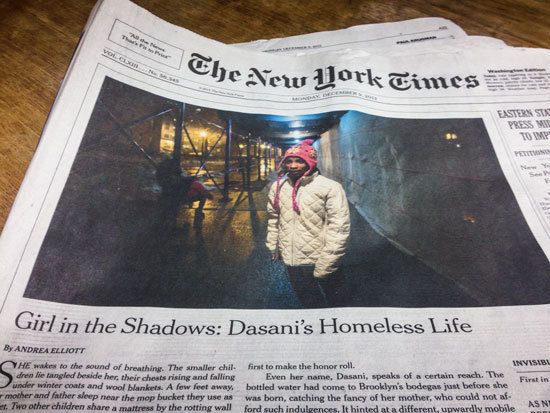 The recent New York Times series Invisible Child powerfully describes the life of Dasani, a 12-year old girl who has spent years in the New York City shelter system with her seven siblings and parents. A thoroughly engaging and talented child, Dasani is both thwarted and supported by her family and by the homeless system that shelters them.

It is tempting, but not particularly productive, to blame either Dasani's parents or the Bloomberg Administration for the completely unacceptable situation in which this child and her siblings find themselves. Both are found wanting.

There is room for blame, but there are also successes to build upon. What can the incoming Administration learn from this story and from the experience of the Bloomberg Administration, which has invested significant creativity and resources in addressing family homelessness? What should its homeless system do to end homelessness for families like Dasani's?

First, what the homeless system CAN'T do is solve every problem of the thousands of homeless and poor families like Dasani's. It can't end intergenerational poverty, drug addiction, family dysfunction, or the affordable housing crisis. And what it SHOULDN'T do is keep people in the limbo of homelessness for years on end. Shelter - no matter how nice - is not the solution to people's problems, except in the very short run.

What the homelessness system CAN do is resolve housing crises and try to keep families in housing while connecting them to the larger services systems that are resourced to address poverty, addiction, family issues and housing. And if that doesn't work, and families do become homeless, it can make sure they have a decent place to stay while flexible resources are used to link them to the housing and services that they need.

The Bloomberg Administration's HomeBase program provided a template for this work. This community-based, crisis intervention program provides tenant/landlord mediation, family intervention, help with household budgeting, emergency rental assistance, connections to employments, and help accessing mainstream benefit programs. It is designed to keep families out of the shelter system, and it does this at considerably less cost than allowing them to become homeless. Why not shift dollars from shelter into these proven, community-based programs?

Of course, there will still be families that become homeless, and they should have decent apartment-style shelters. But these should be short-term, and the focus should be on services that assist the family to quickly return to the community. The deplorable conditions at Auburn Family Residence will certainly raise demands to improve the quality of shelter; a better demand would be to reduce the number of families that become homeless, shorten the time they spend homeless, and close shelters.

With respect to housing, the Times series linked the increase in family homelessness to the elimination of long- and then short- term housing subsidies during the Bloomberg years. Considerable research indicates that long-term housing subsidy does end homelessness. However, it is unlikely that the de Blasio Administration will be able to fund enough long-term rental subsidies to house every low income household that needs assistance; and with declining appropriations, the federal government is not going to be much help.

There must, however, be an exit strategy out of homelessness. Most families can be aided with short term rental subsidies such as those that reduced homelessness when used in the Bloomberg Administration. To the extent that it does have long-term housing subsidies, the de Blasio Administration should target them tightly to families with a seriously disabled parent, and others with extraordinary needs. Housing affordability is the crux of the matter, so the city must be creative and do as much as it can.

These are, as is appropriate for a crisis intervention, largely short term strategies. The de Blasio Administration is going to want to address the underlying issues that drive homelessness as well. This will mean considerable investment in affordable housing and strategic use of city land to increase the supply of such housing; improved community-based services and better coordination of those services; and jobs. These are much more significant commitments, and if the homeless system is properly re-tooled, it may be able to contribute resources to these efforts.

New York City has thousands of poor households with children as compelling and deserving as Dasani. A similar series could have been written about Dasani's mother twenty years ago, and perhaps her mother twenty years before that. The new Mayor must ensure that the same story is not written about Dasani's daughter. There is no easy fix. But learning from and building upon what has gone before is the way forward.