"Star Wars" fans are one step closer to getting their hands on a real-life lightsaber thanks to the efforts of one innovative YouTube user, who created a 3-watt do-it-yourself "lightsaber."

Drake Anthony, who describes himself as "The DIY Laser Guy," recently posted a video of his homemade lightsaber burning through various small objects -- from a piece of cardboard to a Ping-Pong ball.

"I usually try to refrain from using the term 'lightsaber' when referring to my lasers but there really isn't much else out there to describe this laser," the 17-year-old explained in the video's description.

Created with a laser diode from a DLP projector and powered by two 18650 lithium-ion batteries, the DIY lightsaber is capable of igniting flammable objects that are placed in its directed beam.

Anthony's DIY design is not the first working lightsaber to hit the Internet. Last year, Wicked Lasers unveiled its specialty LaserSaber. However, unlike Anthony's design, which focuses on function over aesthetics, the LaserSaber's beam is enclosed in a protective diffuser tube.

As The Next Web notes, Anthony's homemade lightsaber may be nowhere near as powerful as the fictional weapons used in the "Star Wars" films, but some safety measures are probably warranted given the laser's tendency to burn through things. 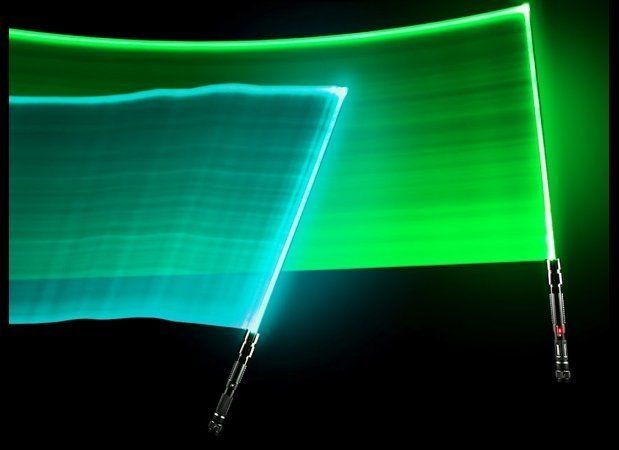