If you snooze soundly at night knowing your beloved house is 110 percent covered by homeowners' insurance, better get out the melatonin: There are probably some gaps in that coverage. Two of the biggest doozies are flooding and earthquakes -- and just because you're not searching through homes for sale in San Francisco, CA or another high-risk area doesn't mean you aren't at risk.

But there can be other hidden voids too. Termites, for one. Mold. Relocation costs are a toss-up at best. And trampolines? Forget about it.

Mind these eight gaps, then dial up your friendly neighborhood agent to begin plugging the holes and get updated homeowners' insurance rates. 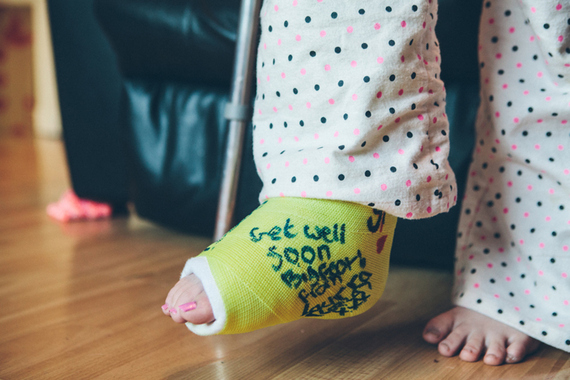 We all say, "It can't happen here," until it does. Just ask people who hunkered down during the recent floods in Columbia, SC. Or survivors of Hurricane Sandy.

Whether or not you reside in a flood plain, you should bite the bullet and spring for separate flood insurance, because that potential calamity doesn't fall under most homeowner plans. It's a small yearly outlay that can save your hide down the line: According to Flood Smart, flood claims over the last five years averaged $39,000, but the annual average cost for flood insurance clocked in at a mere $700.

Backup damage is a whole other can of watery worms -- it's water damage that comes from the ground up (think clogged sewer or sump pump). But just like flood damage, backups aren't covered by a standard homeowners' policy. Don't risk a flooded basement and lost personal items: spring for this backup coverage as well, another tiny expense that could have you exhaling in relief down the line.

With water comes spores, and lots of them, embedding themselves into your air ducts and behind your drywall. Mold occurs naturally, and many species are harmless, but the wrong species in your home can be a true health hazard.

The CDC ticks off nasal stuffiness, throat irritation, wheezing, and eye and skin irritations as just some of the side effects, which can be much worse for children and those with asthma. Whether you're covered or not comes down to the origin of your mold. A sudden burst pipe that you work to address immediately? You're probably good. But if you happen upon a mold issue when renovating your home, that removal is going to come out of your own pocket.

If ice dams caused you to flee your home for an extended period last winter, you might have found out the hard way that not all insurance plans cover relocation costs, even if the home loss itself is covered. Tack on additional living-expense coverage to your policy and you're safe for up to 12 months (even 24 in some states).

Earthquake insurance: it's not just for Californians anymore. Don't believe us? The U.S. Geological Survey's seismic hazard map and Trulia Local Maps should do a pretty good job convincing you. Tremors happen everywhere, and as savvy San Franciscans have long known, earthquake damage is not covered under a standard homeowners' policy.

If you don't live near a major fault line, rates tend to be affordable, but if you're in an earthquake-prone area, the costs will be relatively high.

Given the liability and the expense, why does anyone have a pool these days? If you inherited one or just like swimming a few laps every day, you might want to start quaking in your water wings when the neighborhood kids come over for a dip.

With good reason: Your liability coverage probably doesn't go nearly high enough when it comes to pool-related injuries (and the inevitable legal expenses). Call your insurance company and increase your limit up to $500,000 -- then build a fence around that sucker for good measure (or, if it is no longer used, convert it into a food producing farm). (Side note: You're also not covered if your pool freezes over and causes structural damage, so drain it or winterize it long before the first frost appears.)

Ready for this? Termites cause an average of $5 billion worth of damage a year in the U.S. alone, according to the National Pest Management Association And none of that is covered by homeowners' insurance.

Yes, there is such a thing as termite coverage, typically obtained through a pest removal service, but you're much better off playing offense on this one by keeping a constant eye out for wood damage.

It's true: Trampolines are springy deathtraps. The Consumer Product Safety Commission reports that in 2014 alone, there were 104,691 ER-worthy injuries associated with trampolines.

That's a lot of clunked heads, and insurance companies have taken notice. Some have begun restricting coverage unless you add spring pads and a net enclosure to your trampoline; others are excluding coverage entirely. Oh, and if you're thinking of ditching the bouncy booby trap for a treehouse, think again: Treehouses, while fun and nostalgia-inducing, are another "high-risk" backyard accouterment that insurance companies are beginning to frown upon. Tackling that swing set install is sounding better and better, isn't it?

7 Steps To A More Polished-Looking Home