Homer Bailey has done it again.

For the second season in a row, the Reds' right-hander has thrown a no-hitter. The 27-year-old held the defending World Series champion San Francisco Giants without a hit on Tuesday night in a 3-0 win.

"Every dog has his day twice, I guess," Bailey told Sam Ryan of MLB Network on the field after the game. "It felt good to do it in front of the Cincinnati fans."

Bailey had a perfect game going through six innings, but walked Gregor Blanco to lead off the seventh. All told, Bailey threw 109 pitches and finished with nine strikeouts.

The seventh overall pick of the 2004 MLB Amateur Draft, Bailey threw his first career no-hitter in late September of last season against Pittsburgh at PNC Park. This time, Bailey managed the feat in front of his home crowd. That previous no-hitter was the most recent one thrown in the majors, making Bailey the first player responsible for consecutive MLB no-no's since Nolan Ryan accounted for a pair in 1974 and 1975, according to MLB Network.

CINCINNATI — Homer Bailey threw his second no-hitter in 10 months and the first in the majors this season, pitching the Cincinnati Reds to a 3-0 victory over the slumping San Francisco Giants on Tuesday night.

Bailey (5-6) became the third Reds pitcher with more than one no-hitter, joining Jim Maloney and Johnny Vander Meer – still the only big leaguer to toss two in a row. Bailey beat the Pirates 1-0 in Pittsburgh last Sept. 28 and got another 17 starts later.

The last pitcher to throw one no-hitter and then another before anyone else in the majors accomplished the feat was Hall of Famer Nolan Ryan, according to STATS.

Bailey walked Gregor Blanco leading off the seventh, the only Giants batter to reach base. First baseman Joey Votto threw out Blanco as he tried to advance from second to third on a grounder.

With 27,509 fans on their feet chanting "Homer! Homer!" Bailey finished it off by getting Brandon Crawford on a high comebacker, striking out Tony Abreu and retiring Blanco on a grounder to third baseman Todd Frazier.

When Votto caught the throw for the final out, Bailey raised both arms in triumph, reminiscent of that grand moment in Pittsburgh last September, then hugged catcher Ryan Hanigan.

Teammates poured onto the field to celebrate and doused with a red sports drink.

It was the 16th no-hitter in Cincinnati history. No Reds pitcher had thrown a no-no at home since Tom Browning's 1-0 perfect game against the Dodgers at Riverfront Stadium on Sept. 16, 1988.

Bailey became the third pitcher in the history of baseball's first professional franchise to get more than one.

Vander Meer threw the only back-to-back no-hitters in major league history in 1938, beating Boston and Brooklyn. Maloney had a no-hitter at Wrigley Field in 1965 and one at home against Houston in 1969.

The Giants were no-hit for the 16th time. The last three pitchers to hold them hitless were all named Kevin – LA's Gross in 1992, Florida's Brown in 1997 and Philadelphia's Millwood in 2003.

Bailey was facing a lineup in a deep funk – two runs or less in nine of San Francisco's last 12 games. He didn't need much help to keep the no-hitter going – the Giants went rather quietly.

Last year was the season of the no-hitter, with seven in all, which tied the modern record. By this point, five had been thrown. So far in 2013, there had been only two close calls.

Bailey became the first to take one all the way this year.

Votto had a sacrifice fly off Tim Lincecum (4-9), and Brandon Phillips hit a two-run homer for all the help Bailey would need.

Lincecum had some of his best moments last season in Cincinnati. Relegated to the bullpen after losing 15 games during the regular season, he went 4 1-3 innings in relief to help the Giants win Game 4 and, eventually, their division series, the first step toward a World Series title.

But there was no stopping Bailey this time.

Shin-Soo Choo hit Lincecum's fifth pitch deep to right. Hunter Pence jumped above the wall and had the ball deflect off the heel of his glove back into play. The umpires initially ruled it a home run, but overturned the call after a review and gave Choo a double. He eventually scored on Votto's sac fly.

Phillips hit a drive into the first row in left field in the sixth inning, his 12th homer for a 3-0 lead.

Water problems are nothing new for Fieldin Culbreth's umpiring crew. It's the same one that was in Oakland when a sewage backup created an awful smell and pools of water in the clubhouses and umpires' room.

NOTES: The Giants moved LHP Mike Kickham into the bullpen, a day after he took his third straight loss. The rookie lasted only 2 2-3 innings in an 8-1 loss to the Reds. San Francisco manager Bruce Bochy was noncommittal about how he'd reconfigure his staff again when RHP Chad Gaudin comes off the DL from a bruised elbow. He's eligible to return on Saturday. 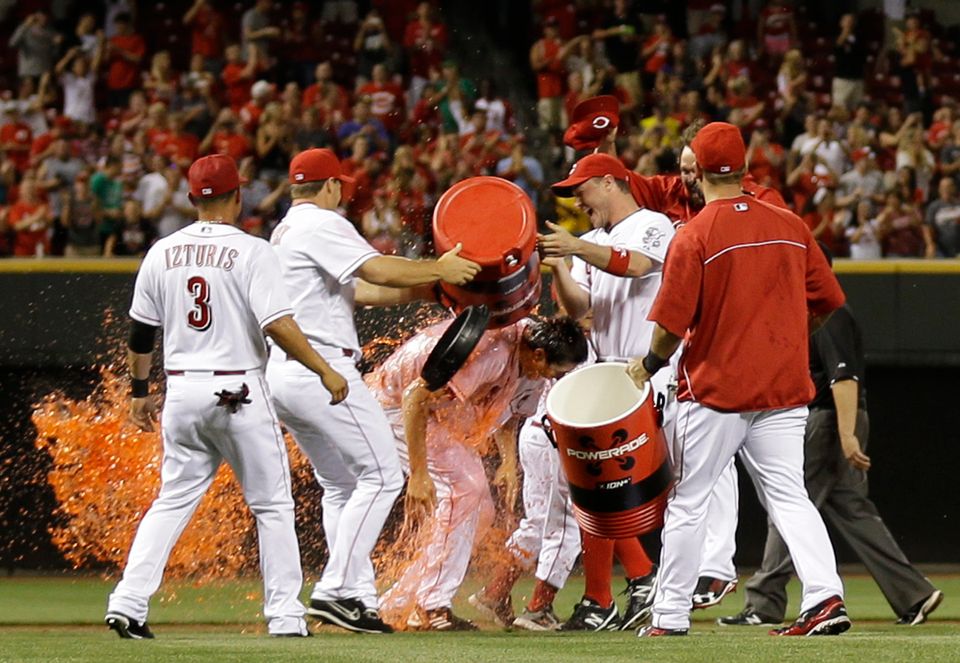