Amidst widespread joy that gay and lesbian Floridians may now legally marry, all of us should pause for a moment of silent reflection, or prayer, in the names of the many thousands of gay men and women literally destroyed by policies of the state of Florida since the 1950s. In the name of loyalty and security, mental health, corruption of youth, sodomy law enforcement and pure animus, the State of Florida, along with its colleges and universities--public and private--devoured many in the gay community through the Sixties and beyond.

When Florida politicians like Jeb Bush and Marco Rubio blithely discuss the rights of gays and lesbians in Florida, they should be reminded of the ferocity of the Florida Legislative Investigation Committee, the so-called "Johns Committee." The work of the Johns Committee was a years-long homosexual witch-hunt led by State Senator and former Governor Charley Johns. The Committee's years of hearings and investigations of faculty and staff at colleges and universities across the state terrorized gays and lesbians through the late 1950s to 1965, when the committee published a truly pornographic state-propaganda pamphlet, dripping in animus, on the evil and danger of homosexuals. The disgusting pamphlet was entitled "Homosexuality and Citizenship in Florida." Its subject: "the extent of infiltration into agencies supported by state funds by practicing homosexuals."

Nor should we forget the fate of Arthur Vandenberg, Jr., a foreign affairs professor at the University of Miami in Coral Gables. Vandenberg, son of the Republican Senate lion Arthur Vandenberg, Sr., played a key role in securing President Eisenhower's nomination by the Republicans in 1952. Unfortunately for Vandenberg, FBI Director J. Edgar Hoover outed him to President Eisenhower, and he was fired on the eve of the inauguration. In shock, Vandenberg moved to Miami where he accepted a teaching post at the University of Miami. Soon thereafter, his homosexuality engulfed him again when the smut magazine "Confidential" published in 1956 an "expose" of Vandenberg, sliming him as a "fairy" with a "limp wrist" fired by Eisenhower. Who else but Hoover's FBI could have delivered such a blow?

Abruptly, and without apparent reason just before the publication of "Confidential", Vandenberg resigned his teaching position from the University of Miami. Was he actually fired? Did the FBI write the University of Miami? Was the Board informed? Was Vandenberg encouraged to resign for 'infiltrating' the University on the eve of the Johns Committee investigations? Donna Shalala, the President of the University of Miami, acknowledges Vandenberg's abrupt resignation is an important issue but says there is no way to appeal the school's refusal to open the Vandenberg case file: "we simply don't ever release records," she wrote in an email. In the days of homosexual witch-hunts, an intensely political matter such as J. Edgar Hoover hunting down a sitting President's advisor, records could be sealed as a "personnel matter." Yet, decades after his death, they remain sealed.

We should also pause and reflect upon those straight allies who stood with gay and lesbian Floridians during such dark times. State Senator John Spottswood (1920-1975) and his wife Mary Spottswood from Key West were such friends. In 1966, the head of the Florida Mattachine Society wrote lesbian ally Lilli Vincenz, "I talked on the phone to Senator Spottswood in Key West (one of the most influential in the Senate)....and a former sheriff of Key West and a good friend, who suggested that I 'lay low' for a while until the legislators have a chance to make the necessary deals with the incoming new Governor Kirk", the first Republican governor since Reconstruction. This sentence tells us that Senator Spottswood--civic activist and personal friends with President Truman--was also a friend of the Mattachine Society. In 1966, this was not an easy thing. At age 27, Spottswood's son Jack ran for the Florida Senate in 1969 and narrowly lost his race. He had become the target of Anita Bryant who ran an ad against him. Bryant's focus was on gay rights. Today, the Spottswood family spans seven generations of progressive business leadership in Key West. The hallway to Jack Spottswood's office is decorated with photographs of his father and mother with Presidents Truman and Kennedy, Fleet Admiral William Halsey and a prescription receipt from the old Spottswood pharmacy for Ernest Hemingway...signed by his grandmother.

Approaching full legal equality, we remember this richness of history and consequence in Florida. 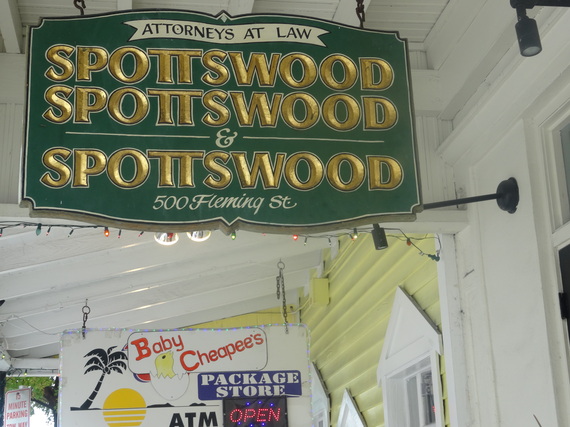