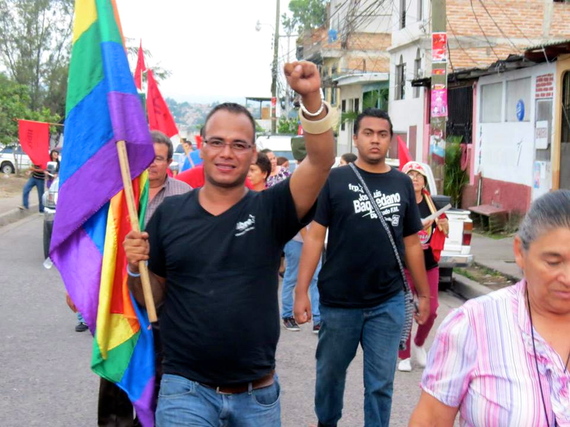 Erick Vidal Martínez, today one of Honduras's most high-profile LGBT activists, was supposed to meet Erick Martínez Avila at one in the afternoon on an otherwise temperate spring day in May 2012. Martínez Avila had been selected to be the representative of the LGBT community in the congressional primaries for Honduras's new leftist political party, the Party of Libery and Refoundation (known by its acronym, LIBRE, which is Spanish for "free"). But the LGBT community had planned to meet on May 6, 2012 to hold a full assembly in order to ensure that all voices, including transsexual and transgender members of the community, could provide input on the campaign ahead.

"The meeting was scheduled at 2:00 p.m., but we had talked about getting together beforehand.," Martínez said. "Then 3 o'clock came around, then 3:30, and he didn't show up. People started to believe that he didn't want to become the candidate. So people said, 'well, we'll just have to find somebody else.'"

The next day, May 7, was Erick Vidal Martínez's birthday. When the other Erick didn't send so much as a text message to mark the occasion, the community's brief annoyance deflated quickly into concern. Later that day, they learned the news -- Erick Martínez Avila had been kidnapped off the streets of Tegucigalpa, the capital city of Honduras. His kidnappers ultimately strangled him to death and discarded his body in a ditch on the outskirts of town.

It was among the more high-profile of dozens of assassinations within Honduras's struggling LGBT community -- another top LGBT activist, Walter Tróchez, was shot while walking down the street in December 2009. Erick Vidal Martínez knew both of them well -- as friends, as political allies, as part of his support network in a country where dissent of any stripe has become increasingly perilous. No one would have blamed him for packing his bags, filing an asylum application and catching the next flight to Ottawa. Or Brussels. Or London.

Instead, just days before Hondurans voted in a landmark general election, Erick met with me for coffee in downtown Tegucigalpa to explain why he's picked up the fight where the other Erick, Walter and other murdered LGBT activists left off, and why he's willing to risk his life to fight for greater rights for the diversity community in Honduras, a task that could become ever more treacherous in the years ahead, when Honduras's new conservative president, Juan Orlando Hernández, will be inaugurated Monday, January 27.

"Everyone in Honduras has fear, but you can't make decisions through fear and the past," Martínez said. "I have to be smart. It would be foolish of me to expose myself. My advantage is my profile as a human rights activist. This is not a bulletproof vest, but it helps... After Erick's murder, I gave up my social life; I gave up my private life."

Martínez, who would go on to stand in the place of the friend with whom he shared a name and a common cause, lost the primary to become LIBRE's congressional candidate. But he credits his campaign with changing attitudes toward the LGBT community, especially within LIBRE -- leftists haven't traditionally been so much more welcoming than anyone else.

Honduras's LGBT community will need those allies even more, with just days to go until Hernández takes office. Hernández defeated LIBRE's presidential nominee, Xiomara Castro de Zelaya, the wife of former president Manuel Zelaya (who was ousted in a June 2009 coup) by an eight percent margin. Though international observers believe that Hernández's victory reflects an accurate count of the ballots, the campaign was conducted against a backdrop of fear. Assassinations of journalists, labor activists and other LIBRE officials, as well as LGBT activists, have been on the rise since the June 2009 coup, and the subsequent administration of outgoing president Porfirio Lobo Sosa, who belongs to the same conservative National Party as Hernández.

Martínez said that Hernández posed the worst threat of all of the major presidential candidates to LGBT Hondurans. It's not difficult to understand why -- Hernández has been clear that human rights won't be a priority in his newly-militarized fight against drug trafficking and Honduras's highest-in-the-world homicide rate. Hernández dismissed LGBT rights in particular, promising to repeal what few protections LGBT Hondurans have. Though LIBRE prevented the National Party from winning an absolute majority in Honduras's National Congress, it won't be able to prevent Hernández from implementing his agenda over the next four years.

"LGBT rights are part of the [LIBRE] platform, and that has also contributed to the escalation of crimes against LGBT people," said Dana Frank, a professor of history at the University of Southern California at Santa Cruz who has written prolifically about human rights in Honduras. "If you think about the whole devastation of the rule of law and the corrupt policing, that puts LGBT people even more at risk, because you can do anything you want and nothing will happen to you."

Though Latin America is easily caricatured as a land of machismo and intolerance, especially when it comes to gay rights and women's rights, the reality is far more nuanced. Mexico City's local legislative assembly recognized same-sex marriage in 2009 and, if anything, South America is becoming a model region for LGBT acceptance. Argentina adopted same-sex marriage by statute in 2010, and in May of this year, Uruguay followed suit and Brazil's National Justice Council recognized national same-sex marriages. Even within Central America, with a culture of sexual conservatism, both Nicaragua and Panama scrapped statutes criminalizing homosexuality in 2008.

Honduras passed a constitutional amendment in 2005 banning both same-sex marriage and same-sex adoption. Since then, Honduras adopted Article 321, which provides for protections against discrimination. But the ability of the Honduran government to enforce Article 321, and the corruption and impunity of the Honduran police forces, mean that enforcement is sporadic. Even if LIBRE had won the election, same-sex marriage isn't on the agenda for Honduras anytime soon. And given the violence perpetrated against the LGBT community in Honduras, gay marriage isn't necessarily Martínez's top priority.

"There are rights that have to be secured first -- the right to life, employment, housing -- fundamental rights," Martínez said. "Basically, we can't get married if we're being murdered."

The hostile climate stems in part from the social stigma for LGBT Hondurans, who can face discrimination from friends and family in a society that remains sexually conservative among both Catholics and Protestants. For Martínez, coming out to his family was easier than for most Hondurans. But it still took the better part of a decade for Martínez to tell his family, with whom he remains incredibly close.

"At some point, you get tired because consciously you know you're doing something wrong, not because of any sexual act, but because you're lying to your family," he said. "You're walking around with paranoia, thinking someone's going to call you maricon. There comes a moment when you say, 'I either stay tied to this or I speak up, and I had to speak to my family."

It's not always such an easy process for young and openly gay Hondurans, though, who are often kicked out of their homes and don't have access to equal opportunities for employment, especially the most visibly gay and transgender Hondurans. Martínez said that often, the most vulnerable members of the LGBT community find jobs in customer service because managers believe that openly LGBT Hondurans are "jovial."

"I always compare the LGBT rights situation here to an onion," Martínez said. "The outer layer is transgender women, who are beaten, and so on to the inner layer of professional men who are married, and who are never going to be 'gay.'"