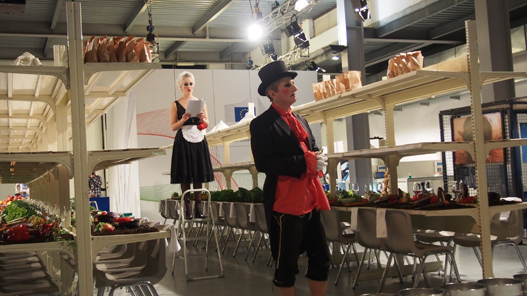 How can food designers introduce new behaviors to consumers? How can they move from ideas and projects to actual production? What is the best way introduce daring, paradigm-shifting innovation into the food industry, which is often hesitant to take risks and ends up proposing more of the same, often just in larger quantities? And how can these innovations become part of larger cultural and social visions?

These are some of the core issues that food designers are working on and will be topics of discussion at the Second International Food Design Conference, which will take place on November 5th to 7th at The New School in New York City. The same questions have also inspired the work of a widely recognized husband and wife duo from Vienna, Austria: Sonja Stummerer and Martin Hablesreiter, also known as Honey & Bunny, whom I have mentioned in a previous post. They are so prolific that it is hard to keep track of their appearances, publications, and performances. Their last project, FOOD | sustainable | DESIGN, unfolded in Milan in October, during the Resonance Festival. It consisted of two meals whose ingredients, courses, methods of preparation, structure and and consumption reflected the themes that were being discussed during the festival. The goal of the events was to make participants reflect on the political and ecological consequences of their daily food consumption.

Despite the theatrical nature of their performances, which are always both thought-provoking and enjoyable, Stummerer and Hablesreiter base their work on wider reflections on food systems, production, distribution, and consumption. Their interest for food started during their studies of architecture at the Universität für angewandte Kunst (School of Applied Arts) in Vienna, under the mentorship of Hans Hollein. In the 1976 exhibition Man Transforms at the Cooper Hewitt National Design Museum in New York City, Hollein had placed the human body at the center of a far-reaching reflection on space, tools, and behaviors, which inevitably led him to food. On that occasion, Hollein had focused on bread from all over the world to reflect on how something so basic has also so much design applied to it. Many years later, inspired by their mentor's inquiries, Stummerer and Hablesreiter started exploring the forms and functions of common foods and eating implements, as well as their origins and development over time. Fish sticks were as intriguing to them as traditional breads or Japanese tea sweets, with which they familiarized themselves during a year-long sting in Japan working as architects.

Building on these early insights, Honey & Bunny slowly moved away from architecture to develop their food design business. They have published books such as Eat Design and Food Design XL, taught seminar and classes, and worked on projects all over Europe. They continue to build on their practice to deepen research and conceptual analysis on food design, in which they observe a lack of theory in terms of philosophy and anthropological understanding.

One of their guiding inspirations, which they hope to turn into projects in the future, is what they provisionally refer to as "post-industrial food design," aimed at changing the way food is distributed, bought and consumed. For instance, what would it mean to directly connect animal farms with butchers and consumers through digital tools but also community-building initiatives? Would such a network make participants more aware of what it actually means to consumer meat, and what its impact is in terms of environmental conservation and sustainability? And how could these ideas and services be translated in order to actually introduce innovation in the food industry? The food business is often suspicious of design approaches whose explicit goal is to usher tangible behavioral changes among consumers. After all, its ultimate goal is to sell, and for that reason it tends to favor projects in packaging, product, and graphic design, introducing new goods that can increase sales without changing the system and the structures that support it.
That is why, Stummerer and Hablesreiter argue, food design approaches that focus on service, behaviors, and organizations by questioning the status quo are successful above all in terms of events, performances, and exhibitions. Collaborations with the food industry -- especially when it comes to mass manufacturing -- tend instead to be limited to brainstorming sessions or lectures, with very little intervention in production. This is a fundamental issue that many food designers face, at some point: is it possible to generate true innovation through partnership with food businesses, or is it instead necessary to create new spaces, parallel or alternative to the current corporate configurations?