A newlywed French man was killed in a shark attack during his honeymoon in an incident near France's Reunion Island Wednesday.

According to the Agence France-Presse, the unidentified 36-year-old was surfing off a popular beach on the island, east of Madagascar, when a shark charged at him twice. After spotting blood in the water, another swimmer notified lifeguards, but by the time the surfer was dragged back to the beach, he could not be revived.

As France's Newsring notes, the couple from Morteau, in eastern France, traveled to the island for their honeymoon with their 18-month-old son.

Witnesses at a press conference held shortly after the incident noted that his wife was on the beach when the attack occurred. She is currently being treated for shock.

Local radio station Antenne Réunion reports that the man was already in cardiac arrest when emergency services arrived, according to French-language publication RTL. He reportedly lost a lot of blood in the attack, with bites on his wrist and thigh.

Reunion's Shark Prevention Association released a statement on its website and Facebook page hours before the incident, announcing that it would cancel its regular surveillance of the surf due to "lack of underwater visibility." As RTL notes, activities on the beach, located on the southern part of the island, have been closely monitored since last April, when another surfer reported that he was charged by a shark.

During the press conference, the island's state representative, Jean-Luc Marx, stated that this is the "first fatal attack since July 2012 on the coast of Reunion," Newsring reports. Previously, three people were killed by sharks off the island in 2011 and 2012.

In a 2011 shark attack, 30-year-old Ian Redmond was on his honeymoon in Seychelles, an island nation off eastern Africa north of Madagascar, when he was killed while snorkeling.

While there are more than 400 species, World Wildlife Fund notes, the great white shark, the tiger shark and the bull shark are the only types of shark that tend to attack humans. According to the most recent statistics from Oceana, there were 4.2 fatal shark attacks worldwide, on average, between 2006 and 2010.

See photos of the scene in the gallery below. (Warning: Some photos may not be suitable for certain audiences.)

CORRECTION: An earlier version of this article misstated the location of Seychelles, a group of islands. Language has also been amended to more accurately specify the location of Reunion. 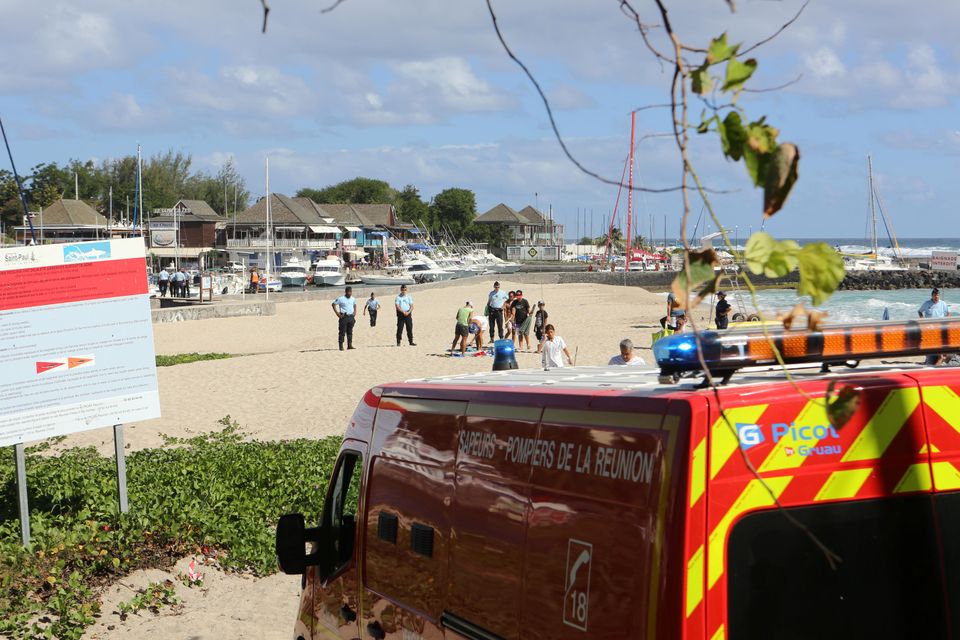 1 / 7
French gendarmes and tourists stand on the beach after a 36 year-old French surfer was attacked and killed by a shark on May 8, 2013 on the beach of Saint-Gilles, on the western coast of the Reunion island. (RICHARD BOUHET/AFP/Getty Images)
Getty Images