Standing at the front of the classroom in Hong Kong, nine-year-old Charlotte Yan recites a 2008 speech by Hillary Clinton -- enunciating the words with a perfect American accent.

"Make sure we have a president who puts our country back on the path to peace, prosperity, and progress," says Yan, her brow furrowed as she concentrates intensely on her pronunciation.

She is one of a growing number of children in the ex-British colony learning to speak English like an American, some parents believing it is more relevant than an accent of the southern Chinese city's former rulers.

Language tutors say wealthy mainlanders are helping fuel demand, crossing into Hong Kong for a pick of the myriad educational opportunities on offer in an increasingly competitive market.

During weekends at Yan's school "Nature EQ" -- where a giant Stars and Stripes flag hangs on the wall -- children as young as five pack into classrooms, chanting words in unison and reciting from memory Robert Frost poems, any error in their enunciation quickly corrected.

Mickey Ho, 15, said he goes to the school because an American accent is "more international" while 19-year-old Sam Yu attends because Hollywood films and popular television dramas make a US lilt "easier to understand and learn".

"I think the American accent is getting more and more important and is maybe taking over the dominance of British English, so I'm willing to learn," Yu said.

"Nature EQ" in Hong Kong's Kowloon area was set up 17 years ago, shortly before Britain handed Hong Kong back to China. Then, only 40 pupils were enrolled but today the school is at maximum capacity with 350 attending.

A short distance away in the Tseung Kwan O district is the "American English Workshop", which has gone from having 20 students a week when it opened 12 months ago to more than 180 today.

They are among a number of centres and tutors specifically providing American English, offering something different to government-run schools where pronunciation largely depends on the accent of the English teacher.

"I intend to send my sons to America for further study so I chose an American accent for them," said Victor Chan, whose two boys -- Jackie aged 10 and Samuel, seven -- attend "Nature EQ".

"I think having an American accent is better for their employment (prospects) in Western countries," the 50-year-old added.

Hong Kong recruitment consultant Adam Bell agrees that sounding American can help boost a candidate's employability -- particularly if the job is with a US firm.

"There's a degree of prestige associated with both the UK and the US accents compared to a Hong Kong accent as it suggests they are from a good background and can afford to study at school or university abroad," he told AFP.

"In terms of employability, I think it largely depends on the background of whoever is doing the hiring.

"If he or she has a North American background I strongly believe someone with an American accent has a better chance of getting the job. Likewise with the UK accent."

Experts say there are signs of a wider shift in attitudes towards accents in Hong Kong as the financial hub moves further away from its 150-year-long colonial past.

Dr Qi Zhang of Dublin City University said there is evidence US accents are "starting to replace" British ones in terms of preference "owing to the popularity of American culture".

Acting Head of English at Hong Kong's City University, Dr Rodney Jones, told AFP: "There's no doubt that the American accent is becoming more prevalent here. The main reason is because people are more exposed to it.

"In the past in Hong Kong there was a sense that speaking in a British accent made you sound more educated.

"Now I think that's changing and perhaps people think speaking in an American accent may have more 'cultural capital'. That is it may make you sound more contemporary, or modern, or may fit in with the international business world better."

Word seems to be spreading to mainland China.

Tim Laubach -- founder of "American English Workshop" -- has increased the number of teachers at his school from one to eight since opening a year ago, to meet rising demand from across the border.

"We have noticed a large influx of mainland Chinese students," he said.

"When we first opened last year we had zero students from the mainland but now at least 30 percent are from there. We expect that number to continue to grow."

Back at "Nature EQ", founder and co-owner Frankie Ng is delighted with his school's progress.

"At first I had a very hard time, nobody was coming. But now it seems I am on the right track," the 65-year-old told AFP, the shelves in his office displaying models of America's Bald Eagle.

"The sound of the American accent English is so defined and clear and easy to teach."

But it would be premature to sound the death knell for the British accent just yet.

"I prefer the British accent. Sometimes I can't understand an American one," Riven Chan, a 28-year-old flight attendant, said.

"I think it's better if Hong Kong people learn to speak English with a British or local accent."

According to Jones at City University, Hong Kongers' fondness for the United Kingdom means a British accent will remain popular.

"Many people here are nostalgic about the British," he said.

"I don't think they think of things like imperialism or colonialism when they hear a British accent.

"It still has a lot of prestige in Hong Kong and the bottom line is whatever accent you speak in, it has no actual reflection on your English proficiency or intelligence." 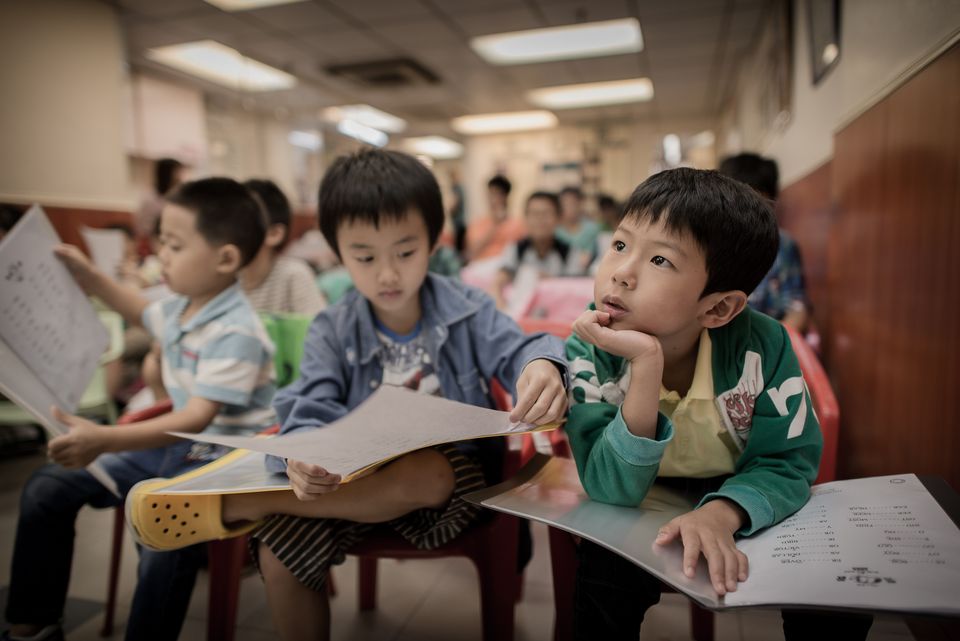 1 / 6
This picture taken on September 29, 2013 shows children attending a class to learn how to speak English with an American accent at the Nature EQ school in Hong Kong. (PHILIPPE LOPEZ/AFP/Getty Images)
Getty Images