Hong Kong police have begun clearing barricades and making arrests around the most volatile site in the city’s ongoing pro-democracy demonstrations. After a generally peaceful clearance of barricades during the day, clashes erupted in the Mong Kok neighborhood on Tuesday night, with police using pepper spray during confrontations with protesters intent on holding their ground.

While the U.S. remained gripped by the turmoil in Ferguson, Missouri, Hong Kong police steadily forced protesters to retreat, opening peripheral roads while leaving the protest's epicenter intact. The police reportedly made several dozen arrests of those who resisted, including at least one Hong Kong legislator.

Moves to clear away some of the dwindling numbers of protesters in the city's Mong Kok neighborhood promised to reopen roads that have been blocked for nearly two months, but the actions also risked reigniting tensions that could draw out more supporters of the demonstrations. Videos taken at Mong Kok show police clashing with umbrella-wielding protesters and sometimes employing pepper spray or similar substances. But after surrendering some territory during the day, groups of protesters spread out into different areas in what some are reportedly calling a "mobile occupation," including halting and surrounding a city bus.

Moves to clear barricades stemmed from court injunctions granted to local transportation companies, which give bailiffs the right to clear specific zones with support from police if needed. Last week, the first court injunctions were used to clear a limited number of barricades near the main protest site in Admiralty, but Tuesday marked the first such attempts in Mong Kok, an area long viewed as a powder keg.

Mong Kok's protest grounds are the grungy counterpoint to the more exuberant and artistic atmosphere at the city's main protest site in Admiralty. The working-class neighborhood of Mong Kok is known for prostitution and organized crime, and protesters there have faced violent attacks from both gang members and locals fed up with the ongoing blockages. 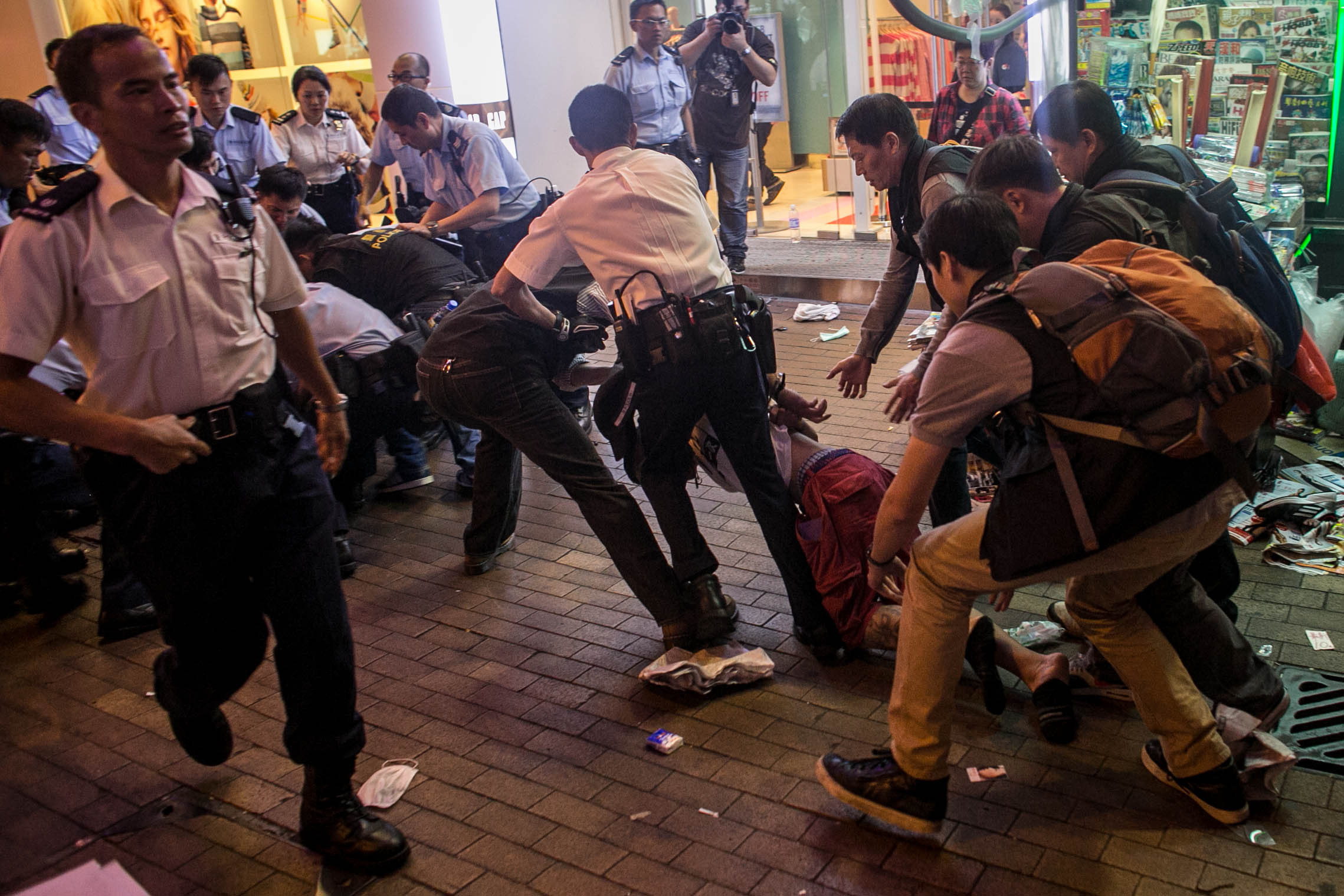 Participants in the Hong Kong demonstrations, often referred to as the Umbrella Movement, are demanding the right for public nomination of candidates in the city’s 2017 elections for chief executive, the highest office in the semi-autonomous Chinese city. Earlier this summer, the Chinese government proposed an election system that would allow the first-ever popular elections for the post, but that would also effectively allow Beijing to pre-screen candidates through a nominating committee. That move set off student protests that metastasized in late September after police used tear gas on demonstrators.

Protesters and police had been locked in a stalemate for weeks before the recent clearings. Student protest leaders have found little leverage in their demands for greater democracy, and police have been cautious about taking action after previous attempts to clear protest sites only led to influxes of demonstrators. In October, police briefly retook one main intersection in Mong Kok, but that action drew thousands more participants who reclaimed the street. 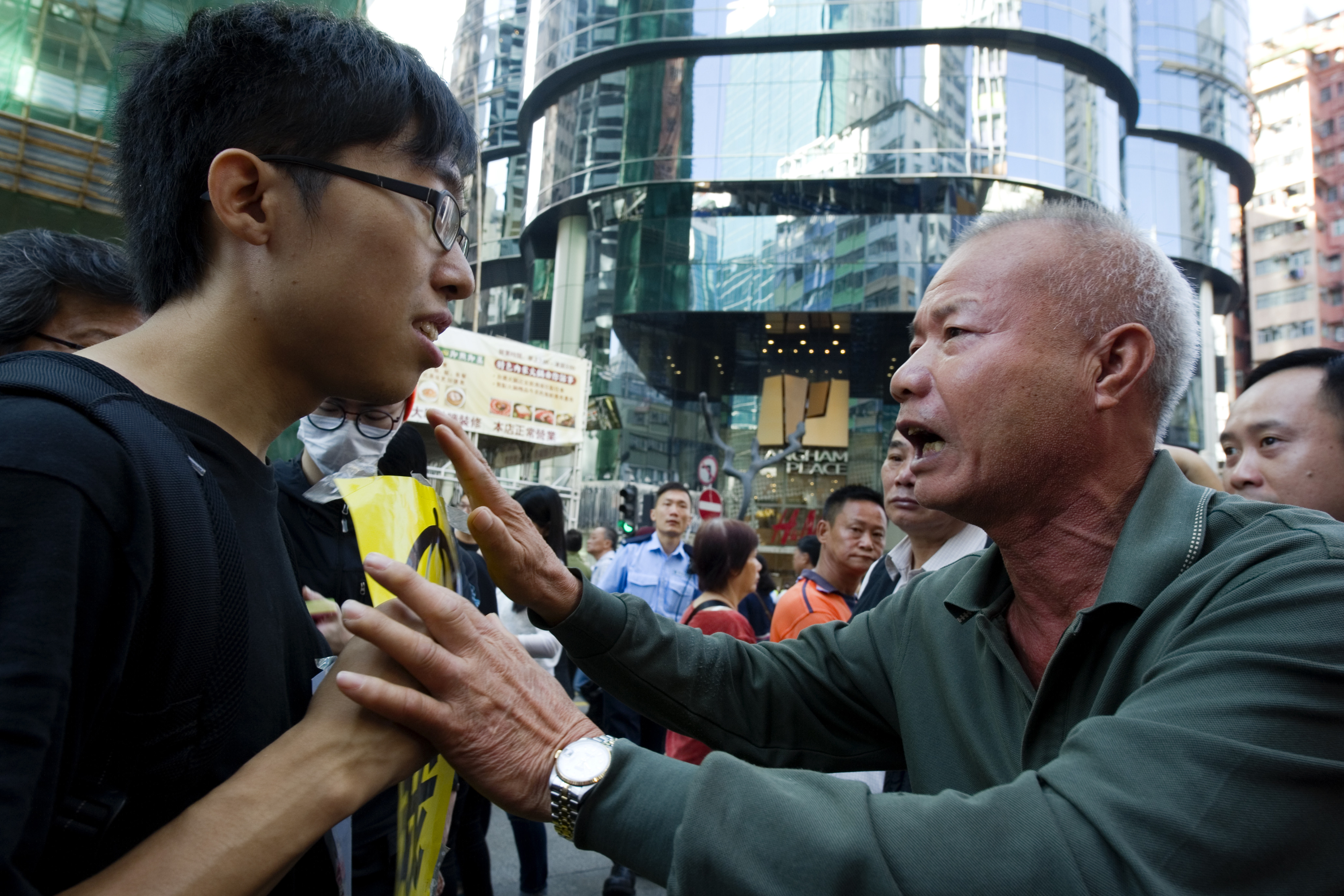 But with weeks turning into months, the numbers of protesters has reportedly dropped from several thousand to several hundred, and recent public opinion polls shows strong support for an end to the demonstrations. One recent poll by the University of Hong Kong found 82.3 percent of respondents favored an end to the protests, while 68 percent supported the police proactively clearing the sites. While support for the protesters had swelled following the use of tear gas on students, the traffic and business disruptions caused by the protests have eroded support among many Hong Kong residents who see little chance of concrete gains from the actions.

During working hours on Tuesday, bailiffs cleared barricades and police made significant progress in pushing back the front lines of demonstrations. Tuesday’s actions weren’t aimed at retaking the main Mong Kok protest grounds on Nathan Road, but rather at shrinking the buffer of blocked off streets surrounding it. At times, bailiffs and police faced significantly more trouble in pushing back hordes of journalists than in dealing with protesters.

But as night fell over Mong Kok, workers now free from their day jobs flooded into the area, creating greater crowd-control challenges for local police. Representatives of the local police said this time they were determined to prevent a reoccupation of cleared areas, but as crowds and police fanned out across the area the outcome appeared far from certain.

Mong Kok has long been the site of choice for more radical elements of Hong Kong's demonstrations. In recent weeks groups calling for an escalation of protests have broken into the city's legislative building and denounced student leaders and pro-democracy politicians for failing to represent their hardline views.

Police encroachments on the protest grounds appeared likely to continue in coming days, but it remained unclear how far local police would be willing to go in clearing the most dedicated holdouts at the occupation sites.