HONG KONG -- Student leaders of Hong Kong's ongoing Umbrella Movement debated city officials on live television Tuesday night, marking the first public dialogue between the two camps since the demonstrators shut down city streets three weeks ago in a bid for electoral reforms. Despite weeks of preparations, Tuesday's dialogue lived up to demonstrators' low expectations, with no breakthroughs produced or end game in sight.

Five Hong Kong officials, led by Chief Secretary Carrie Lam, squared off across a U-shaped table against five representatives from the Hong Kong Federation of Students (HKFS), all dressed in black T-shirts that read "Freedom Now!" The event was broadcast live on television and projected on screens at protest sites to the cheers and jeers of thousands of demonstrators. 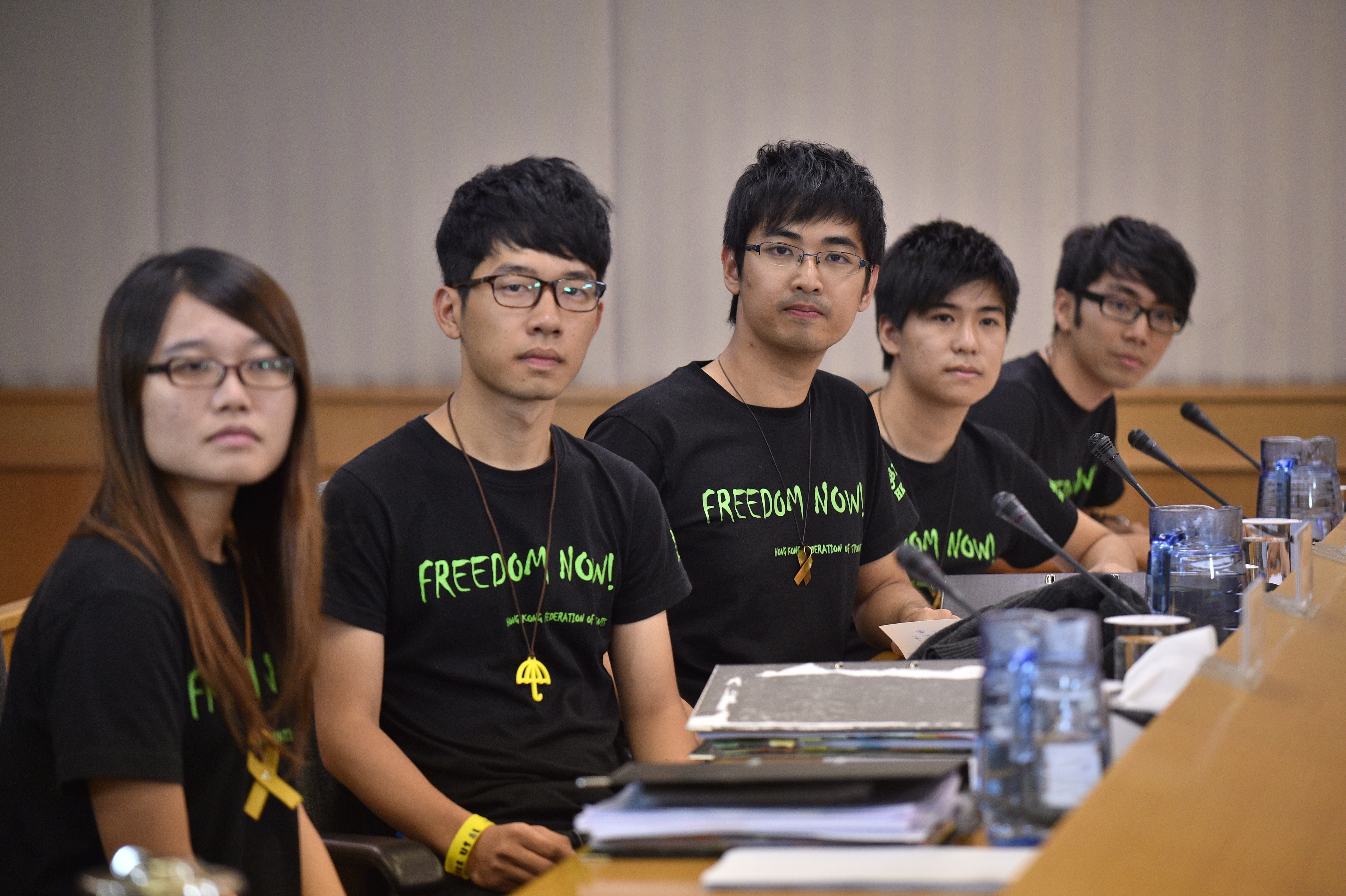 During the talks, Lam and her colleagues described protestor demands as unattainable given decisions handed down by Beijing. Student leaders responded by calling on officials to stand with the protesters in seeking to win more freedom from the mainland Chinese government.

"[Officials] in the Hong Kong government can now decide whether to be democratic heroes or historical villains ... I believe every Hong Kong citizen is waiting to see," said Alex Chow of HKFS, according to a translation by Reuters. 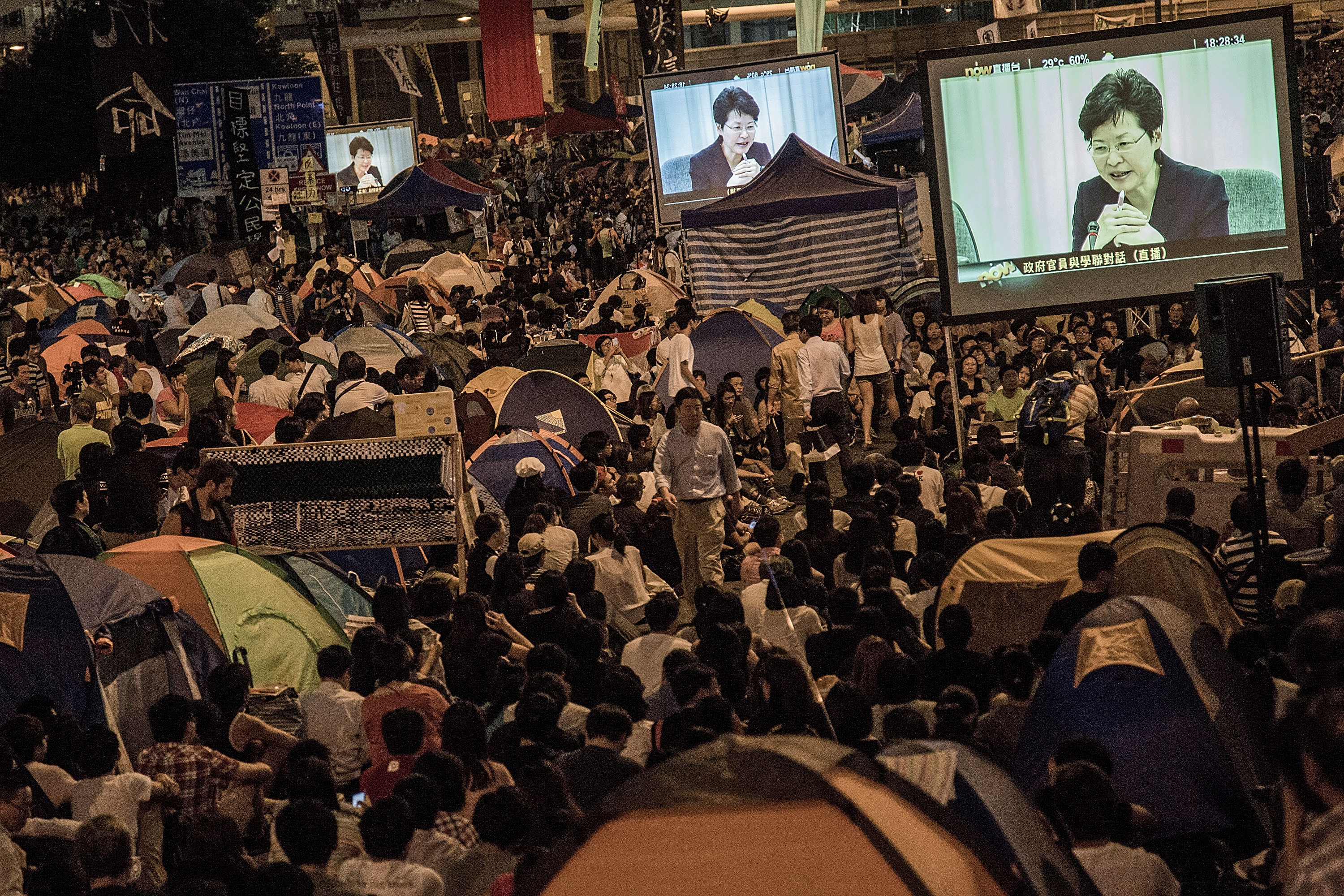 Demonstrators occupying major swaths of the Asian financial hub are demanding citizens have the right to nominate candidates for chief executive in 2017 elections. Under a plan released by China's National People's Congress earlier this year, 2017 will see the first one-person-one-vote elections for the position, but candidates must first win approval from a 1,200-person committee that opponents say is stacked with pro-Beijing voters.

Great Britain returned Hong Kong to mainland China in 1997 after 150 years of colonial rule, with China adopting a "one country, two systems" model in which Hong Kong residents were promised they could maintain personal liberties and that Beijing would work toward a goal of universal suffrage. The mainland Chinese government says that it has followed through on that promise with universal suffrage for the 2017 elections, but protesters say that only public nomination of candidates can be called "true universal suffrage."

Demonstrators gather at a protest site in Admiralty to watch the dialogue between student leaders and Hong Kong officials.

During Tuesday's debate, Lam cited Hong Kong's Basic Law, the founding document that governs Hong Kong's relationship with the mainland, in declaring protester demands for full civil nomination to be out of reach.

“Maybe you are disappointed in what we said today, but we must obey the Basic Law. Otherwise we will be taking the wrong path, wasting our time and sticking to where we’ve been,” said Lam, according to a translation by the South China Morning Post. “I hope you have the courage and wisdom to think of a way out of the current situation. I hope you share the responsibility with us.”

Lam said she would seek more dialogue with the students, but no further talks have been confirmed by student leaders.

Government officials pledged during the debate to submit a report to Beijing reflecting the views of Hong Kong residents, and earlier in the day embattled Chief Executive C.Y. Leung had hinted at potential compromise on the makeup of the nominating committee. In an interview, Leung suggested that there was "room to make the nominating committee more democratic," but demonstrators watching the debates at Hong Kong's Admiralty protest site were unimpressed by the government offer.

“Everything the government said this time is stuff you could read off their website. Where’s the progress there?" asked Leo Mak, a 36-year-old IT professional who has been attending the protests for weeks. "The Hong Kong Federation of Students came to talks with sincerity, but the government isn’t sincerely trying to resolve the problems.”

Other demonstrators took issue with Hong Kong officials' claim that key decisions were effectively out of their control.

"They’re just blaming it on the central government, saying, ‘We don’t have any power,’" said Vanessa Law, a 31-year-old demonstrator who has been regularly attending the protests after getting off work at a local university. "I think the Hong Kong government has the right to speak up for its people, to fight to change the framework a little bit."

Protesters demanding changes to that electoral framework have already occupied major intersections for three weeks, turning occupied territory into miniature experiments in direct democracy, but traffic snarls and mounting tolls on local businesses have dented public support for the demonstrators. Protest grounds have become the site of heated debates, as some local residents angry over traffic congestion and business disruption vent their frustrations at student demonstrators.

“The government expressed its sincerity and it did what it could, but I can’t see students responding to that," Yung told the South China Morning Post. "I call on more people to … let the students know how upset they are [with the protests], and to show that Occupy does not represent the majority.”

During the public debate, one Hong Kong official cited public opinion surveys suggesting that a majority of Hong Kong residents were willing to accept the current electoral framework. Lam also described the current arrangement, established by an Aug. 31 decision from Beijing, as a milestone in democracy development that was to be treasured.

"You cannot only have idealistic pursuits. You have to be pragmatic," said Lam, according to the South China Morning Post. "I really can’t understand why [HKFS leader Lester Shum] says the Aug. 31 decision ‘kills democracy.’ It gives ‘one person, one vote.’ Isn’t it a big step forward?”

As the discussion wrapped up, Shum took an unyielding stance, calling on officials to push back against electoral plans handed down from Beijing.

"We are the generation chosen by times [to come forward]. I think the same applies to you -- you are the officials chosen by times," Shum said. "Can you be responsible? Or will you will be the ones that kill our political future and be the sinners of 1,000 years?"