We have known for some time that public art with sculptures, statues, and murals everywhere, and buildings with their uniquely carved doorways, cornices, and columns are usually what distinguish one city from another.

But Art and Culture Districts -- with their critical mass of art galleries, cinemas, music venues, public squares for performances, restaurants, cafes and retail shops -- have the potential of attracting, and nurturing the creative workforce our cities need to succeed in the "new economy."

After an intense political process involving several agencies of the government, artists, art and culture organizations, land developers, urban planners and architects and a wary public, the city -- after more than a decade -- is now beginning in earnest to fully develop the original concept of a major Art and Culture District.

According to Bonny Wong, a Director in the CEO's Office, and Secretary of the Board of the District, "The project has been in planning stage and (they) have only just started foundation works for the Xiqu Centre, one of the first buildings on the site." 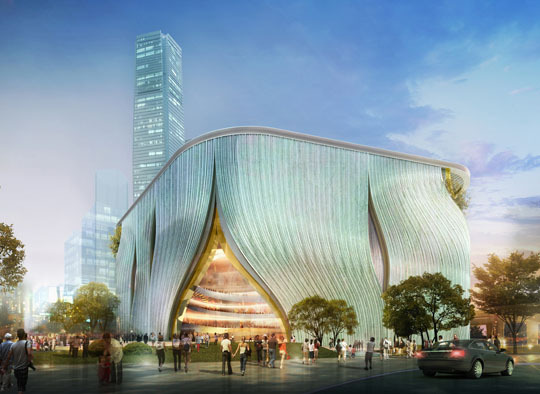 As the Hong Kong Economic Analysis and Business Facilitation Unit in the Financial Secretary's Office, put it in 2007:

"The development of the West Kowloon Cultural District (WKCD) is an important investment in Hong Kong's arts and cultural infrastructure, a major step to promote cultural and artistic activities in Hong Kong, and a strategy that supports the long term development of Hong Kong as a creative economy and a world city. It is expected to bring about not only substantial tangible economic output and employment, but also various significant intangible benefits."

Construction only began last year after design competitions and extensive planning and agreement on financing. The early proposals were rejected by the government but returned to track in 2006, and the government established the Consultative Committees to formulate new recommendations on planning, financing and marketing.

However, this is just the first of 17 core arts and cultural venues to be opened at the West Kowloon Cultural District. When completed, assuming no more delays and amendments to the vision, it will be the envy of Asia certainly, but perhaps the world.

Hong Kong Secretary for Commerce and Economic Development, Mr. Gregory So, at a luncheon in Los Angeles recently said, "Hong Kong is not just a city of business, it is also a city of creativity and character. Business and the arts not only exist comfortably side-by-side, they complement each other."

As one of the world's leading international financial centers, it has a major capitalist service economy characterized by low taxation and free trade, with one of the highest per capita incomes in the world. According to the 2014 Index of Economic Freedom, published annually by the Heritage Foundation and the Wall Street Journal, Hong Kong tops the list of the freest economies in the world.

No surprise then that this global city -- now part of Mainland China -- is becoming one of the most creative cities in the world too.

In fact, Hong Kong has spent over 60 million dollars (U.S.) in just the last few years "to support various programs that develop and promote creative industries and generate new business opportunities." Two hundred million dollars alone has gone to promote the design sector, and over 2.8 billion dollars allocated to turn part of the city near its harbor, West Kowloon, into an art and culture district stretching across 40 hectares or 99 acres. While that itself represents a large investment, Hong Kong sees the strategic importance of reinventing West Kowloon.

The city launched Art Basel Hong Kong which last year featured 245 galleries from 35 countries. Clearly, they take great pride spending resources to nurture and support "the creative class." But the Art and Cultural District is clearly their crown jewel.

The Xiqu Center is a theater for Opera, and other performing arts. Scheduled for completion in 2016, the seven-storey building will house everything from shops and restaurants to a teahouse with a performance stage-the classic setting for Chinese opera performances.

A separate main theater of contemporary design will seat 1,100 audience members. An additional 2,000-square-meters of the Centre will be dedicated to arts education and public leisure space.

The Xiqu Centre is one of 17 planned arts and cultural facilities to be built within the West Kowloon Culture District. These also include the new museum for visual culture in Hong Kong, a center for contemporary performance, and a music center.

According to the The Kowloon Authority, the winning design was chosen unanimously for embodying the "essence of Xiqu" (Chinese Opera) through, what they call its "four core design principles":

•The concept of gateway and pavilion is embodied in the sitting of the building. All four corners of the site are open to welcome visitors to the centre.

• The concept of courtyard is embodied in the unique building massing. Below the 1,100 seat Main Theatre is a generous weather protected public space for the citizens of Hong Kong, an urban stage for informal events and celebrations.

• The concepts of nature and urban landscape are expressed in a three-dimensional landscape treatment found throughout all levels of the complex.

• The concept of "flow" or "qi" is expressed with curvilinear planes and form. The exterior façade is curved with arched openings. Multi-level circulation paths capture the pedestrian flow from adjoining sites and the neighborhoods.

These districts are complex to be sure, and as the Hong Kong experience has shown, sometimes tricky as the history of the this initiative has shown. While the Kowloon Authority would not comment on its progress, the effort now seems to be on track to become a model for other cities around the world.

There is no doubt that these districts are the incubators of creativity itself, and as such, a vital ingredient to every city that wants to become a major force in the creative and innovative economy.