HONG KONG, Sept 29 (Reuters) - Riot police advanced on Hong Kong democracy protesters in the early hours of Monday, firing volleys of tear gas that sent some fleeing as others erected barricades to block the security forces in the heart of the former British colony.

Earlier, police baton-charged a crowd blocking a key road in the government district in defiance of official warnings that the demonstrations were illegal.

Several scuffles broke out between police in helmets, gas masks and riot gear, and demonstrators angered by the tear gas, last used in Hong Kong in 2005.

The unrest is the worst since China took back control of Hong Kong from Britain in 1997. It poses a serious challenge to Communist Party leaders in Beijing, concerned that calls for democracy could spread to cities on the mainland and threaten their grip on power.

Thousands of protesters were still milling around the main Hong Kong government building, ignoring messages from student and pro-democracy leaders to retreat for fear that the police might fire rubber bullets. 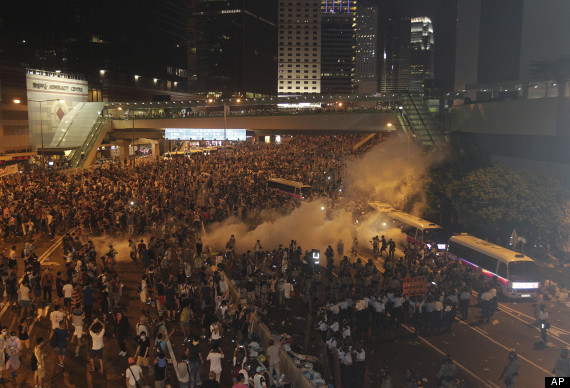 "If today I don't stand out, I will hate myself in future," said taxi driver Edward Yeung, 55, as he swore at police on the frontline. "Even if I get a criminal record it will be a glorious one."

Britain returned Hong Kong to Chinese rule under a formula known as "one country, two systems" that guaranteed a high degree of autonomy and freedoms not enjoyed in mainland China. Universal suffrage was set as an eventual goal.

But Beijing last month rejected demands for people to freely choose the city's next leader, prompting threats from activists to shut down the Central business district. China wants to limit elections to a handful of candidates loyal to Beijing.

The protests later spread to the busy shopping district of Causeway Bay and across the harbor to Mong Kok, posing a greater challenge for authorities to contain, local media reported.

In a move certain to unnerve authorities in Beijing, media in Taiwan reported that student movement leaders had occupied the lobby of Hong Kong's representative office on the island in a show of support for the democracy protesters.

"The police are determined to handle the situation appropriately in accordance with the law," Leung said, less than two hours before the police charge began.

Police had not used tear gas in Hong Kong since breaking up protests by South Korean farmers against the World Trade Organization in 2005.

"We will fight until the end ... we will never give up," said Peter Poon, a protester in his 20s, adding that they may have to make a temporary retreat through the night.

Police denied rumors that they had used rubber bullets. 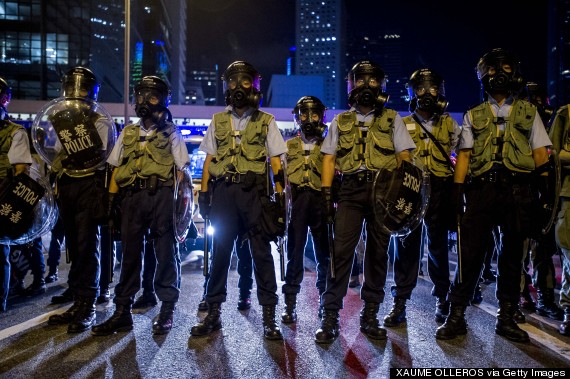 A spokesperson for China's Hong Kong and Macau Affairs Office said the central government fully supported Hong Kong's handling of the situation "in accordance with the law."

Such dissent would never be tolerated on the mainland, where student protests in and around Beijing's Tiananmen Square calling for democracy were crushed with heavy loss of life on June 4, 1989.

In mainland China, the phrase "Occupy Central" was blocked on Sunday afternoon on Weibo, the country's version of Twitter. It had been allowed earlier in the day.

Later, a Hong Kong government statement urged the Occupy organizers to bring an end to the "chaos," for the overall good of the city. The government said some public transport may be disrupted on Monday due to the protests, while some schools in affected areas would be closed.

A tearful Occupy organizer, Benny Tai, said he was proud of people's determination to fight for "genuine" universal suffrage, but that the situation was getting out of control, local broadcaster RTHK reported. He said he believed he would face heavy punishment for initiating the movement.

Inside the cordon, thousands had huddled in plastic capes, masks and goggles as they braced for a fresh police attempt to clear the area before Hong Kong re-opens for business in the morning. The city's financial markets are expected to open as usual on Monday.

"WE WILL WIN WITH LOVE AND PEACE"

Publishing tycoon Jimmy Lai, a key backer of the democracy movement, said he wanted as big a crowd of protesters as possible, after a week of student demonstrations, to thwart any crackdown.

"The more Hong Kong citizens come, the more unlikely the police can clear up the place," said Lai, also wearing a plastic cape and workmen's protective glasses. "Even if we get beaten up, we cannot fight back. We will win this war with love and peace."

Organizers said as many as 80,000 people thronged the streets in Admiralty district, galvanized by the arrests of student activists on Friday. No independent estimate of the crowd numbers was available. 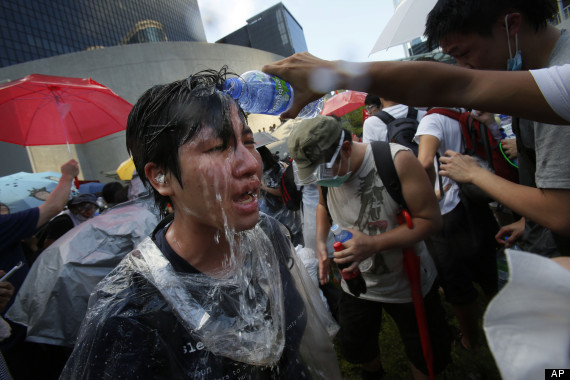 A week of protests escalated into violence when student-led demonstrators broke through a cordon late on Friday and scaled a fence to invade the city's main government compound. Police used pepper spray to disperse the crowd. The Hong Kong Federation of Students extended class boycotts indefinitely.

Police have so far arrested 78 people, including Joshua Wong, the 17-year-old leader of student group Scholarism, who was dragged away after he called on the protesters to charge the government premises.