By Jasmine Chia, Harvard Class of 2018 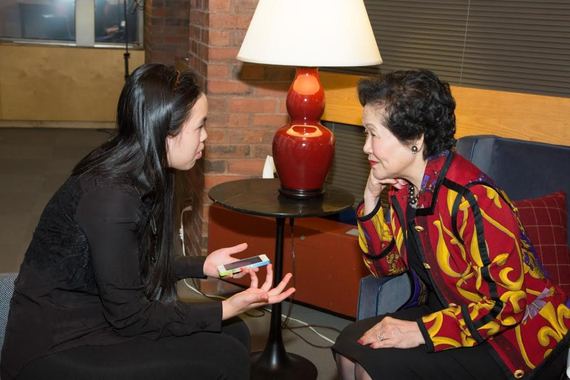 Anson Chan cut a formidable figure in the room. She strode in and immediately sat down, training her incredibly sharp eyes on me. I almost withered in inadequacy: it is no wonder she is called the "Iron Lady" of Hong Kong.

Chan, in her role as Chief Secretary, was formerly Hong Kong's second most powerful official, and continues to remain influential in Hong Kong politics today. Speaking at the JFK Jr. Forum on Hong Kong's relationship with China, two countries she characterized as "uneasy bedfellows", she called for China to bring its authoritarian encroachment on Hong Kong to an end.

"In their [the Beijing Government] minds you can have sustainable economic growth without political freedoms and basic rights, whereas we in Hong Kong know that Hong Kong's economic success rests on the fact that we have the rule of law, a corruption free civil service and basic public rights."

The One Country Two Systems arrangement in Hong Kong was aimed at making the Special Administrative Region both more Chinese and more democratic, but the evident tension between those goals has forced Chan to come out more vocally, and more explicitly, in defending the importance of democratic rights in Hong Kong.

"What sets Hong Kong apart from any other Chinese city is the fact that we have the rule of law, we have an independent judiciary, we enjoy rights and freedoms. Particularly important: freedom of expression, freedom of religion, freedom of assembly, freedom of the press, academic freedom."

Implicit in the urgency of her logic is the siege mentality that informs Singapore's unyielding, and more than slightly authoritarian, emphasis on economic growth - an emphasis that onlookers have attributed to Hong Kong's government as well. However, Chan comes to a very different conclusion in terms of governance and economic growth:

"We are a very small place, we only have a 1000 square kilometers, we only have 7.3 million people, so we cannot compete with any mainland Chinese city or province in terms of resources, either human or land. But where we do compete and what gives Hong Kong the competitive edge is our soft infrastructure, which revolves around the rule of law and basic rights and freedoms."

In the democratic deficit of the 21st century, with China's consolidation of power under the CCP, Angola's intensifying repression under pressure from oil prices, the increasing tyranny of Malaysia's scandal-ridden prime minister and many more, the intrinsic benefits of democracy is seen by certain leaders as a subject of debate. However, Chan presents a very clear instrumental argument for why democracy matters - for the economy and for the individual.

"Unless you have the rule of law and not rule by law, and certainly not rule by men, then you cannot guarantee that every individual will enjoy equal rights, that basic rights will be protected, that you can have access to information without there being a gag, that you will not be subject to arbitrary detention or imprisonment."

"This is where Hong Kong's strength lies."

And authoritarian rulers should take note.

--
Jasmine Chia is a Thai-Singaporean sophomore studying Government and Economics at Harvard University, trying to understand what democratic politics looks like.