A college newspaper in Australia published a cover photo of 18 different vaginas to protest censorship and over-sexualization of lady parts.

In perhaps an unsurprising bit of irony, the cover never got circulated because it was censored, the newspaper said on its Facebook page.

Honi Soit, the University of Sydney's student paper, first attempted to print a cover with entirely naked genitalia (click below for the original cover) but was told by lawyers for the Students Representative Council to obscure the images. Then it published a version with the vulvae covered by black bars. However, the council, which operates the publication, determined that the black bars didn't hide enough and seized all 4,000 copies off shelves this week, Jezebel reported.

“The cover was meant to be an empowering message to women that they don’t need to be ashamed of their bodies," Editor-in-Chief Hannah Ryan told Jezebel. "This response, and the fact that it is possibly criminal, is therefore incredibly disappointing.”

And it concludes: "We hereby present to you the censored vaginas of 18 Sydney University Students. We present them, tarnished, enraged, and enlarged. And we ask you, the reasonable person, are you seriously offended by a body part half the population has?"

The SRC feared the original cover was against the law, the Sydney Morning Herald reported. But when the printing came back with the black bars not as dark as expected, Ryan told the metro daily, "I was surprised it wasn't fully opaque, but I was slightly happy it happened because the original plan was to publish it without the black bars."

In attempting to sum up the contretemps, reader Trisha Jha wrote on the paper's site: "If you can't push the boundaries in a student newspaper at a university, where can you? Universities are places where you're meant to be challenged and confronted -- any censorship goes against that spirit."

The Huffington Post reached out to Honi Soit editors and Students Representative Council President David Pink but did not immediately hear back.

Click here for the uncensored cover. (WARNING: Photo is NSFW.) 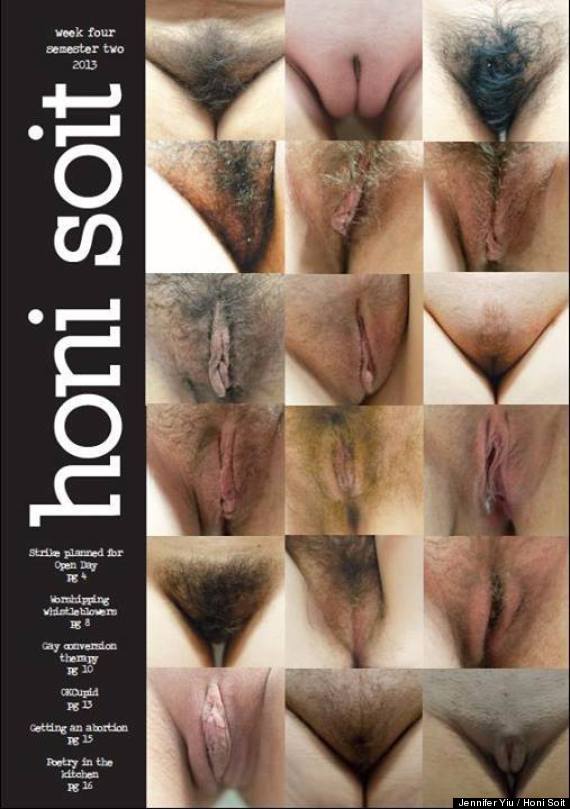 UPDATE: In an email to The Huffington Post, Honi Soit Editor-in-Chief Hannah Ryan wrote: "It's fantastic that we've started a worldwide conversation. Women have contacted us telling us they'd never seen other people's vulvae before and that they feel better about their bodies. Perhaps young heterosexual men's expectations have been adjusted to become more realistic, as well. Other media organisations have come on board and argued that it's ridiculous that to show a body part that 50% of the population has is illegal, and possibly criminal."