UPDATE ― July 27, 2017: The Honolulu Fire Department said Thursday that the fire at the Marco Polo high-rise in Honolulu was actually a seven-alarm fire and not a five-alarm blaze, as it had announced on the day of the incident, July 14. The cause of the fire has yet to be determined.

HFD spokesman David Jenkins told the Honolulu Star-Advertiser that the status of the fire changed after further review. The updated status is based on the size of force of personnel and equipment it took to fight the fire, including more than 120 firefighters and 15 fire engines.

About 200 of the building’s 560 residential units were damaged by the fire and the water used to battle it.

UPDATE ― July 14, 2017: Mayor Kirk Caldwell said the fire at the Marco Polo high-rise in Honolulu was officially under control at 6:47 p.m. local time.

HONOLULU ― Firefighters in Hawaii were battling a five-alarm fire late Friday afternoon that broke out on the 26th floor of a high-rise apartment building. Three people were killed in the blaze and several others were injured.

Apartments on at least four floors of the Marco Polo building were burned, Capt. David Jenkins of the Honolulu Fire Department confirmed to HuffPost. The fire had started on the 26th floor but spread to the 25th, 27th and 28th floors and reached both sides of the building, which faces the ocean on one side and the Manoa mountains on the other.

HFD received the first reports of the fire at 2:15 p.m. local time. Firefighters were still in the building early Friday evening and had assisted people out of the building as late as 4 p.m.

Three people were confirmed dead in the blaze and at least 16 people were injured, according to The Associated Press and Hawaii News Now.

Jenkins told HuffPost around 4 p.m. on Friday that several people were in need of medical attention and were assisted by paramedics, but he couldn’t disclose an exact number of victims or their degrees of injuries.

“There were reports of people trapped in the building. However, the status of how many have gotten out and how many still remain are unclear at this time,” he told HuffPost.

The source of the fire has yet to be determined. The fire was still burning Friday night, at least four hours after it was reported.

“I looked out my window and noticed black smoke. I then opened my window to find the fire was a unit above us, just across,” Horiguchi told HuffPost. “I also heard a neighbor above screaming for help.”

The neighbor, he said, a woman who he believed was in her 50s, appeared to be trapped.

Horiguchi said he ran out of his unit to a fire escape on the right side of the building. When he entered the fire escape, he smelled and saw smoke, and could feel heat above him.

“I went back to my floor. The hallway was starting to fill with smoke and you could see smoke coming from the elevator shafts, seeping into the 25th floor,” Horiguchi explained.

He was able to get out by using another fire escape, “with many neighbors exiting as well,” Horiguchi said.

Emergency Medical Services in Honolulu sent several ambulances to the Marco Polo building. Paramedics set up a triage location inside the building, and several patients were evaluated and treated for smoke inhalation, the Honolulu-Star Advertiser reported.

At least four patients were taken to a hospital, with two in serious condition.

By 4:50 p.m., flames had burned through the side of the building and were still visible, with thick black smoke billowing. Glass windows appeared broken and parts of the white building’s facade appeared dark black. Debris was falling from the burned area.

The Marco Polo is a large residential and commercial building with 36 stories in the main tower and a seven-story parking garage. It is next to the Ala Wai Canal and contains more than 560 residential units. Construction on the building began in 1969 and was completed in two years.

The Marco Polo was built before the city began requiring sprinkler systems in buildings and has been involved in at least two other fires within four years. In January 2013, a microwave fire on the eighth floor caused $1,150,000 worth of damage but caused no injuries. A two-alarm fire in October 2014 was caused by an exploding pressure washer.

Honolulu Mayor Kirk Caldwell said during a news conference outside the Marco Polo building that the fire probably would have been contained sooner if the building had been fitted with a sprinkler system.

This article has been updated with the fire spreading to four floors and with additional details about the building. 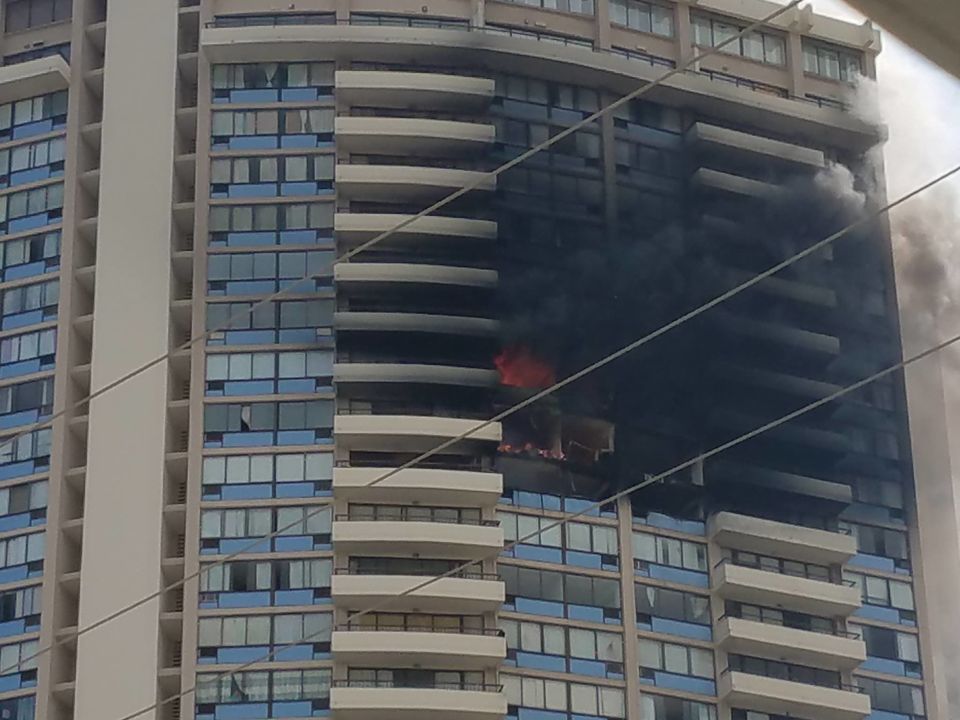