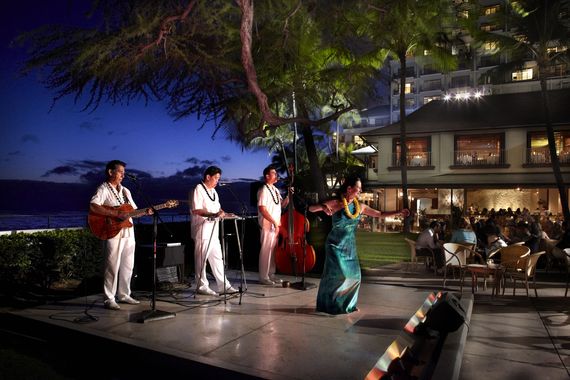 (To me, nothing defines the atmosphere here like the nightly Hawaiian music performed at the resort's House Without A Key)

When I was a kid, my parents vacationed a week each summer, and one each winter. We always stayed at "resorts" rather than hotels, and usually historic, one-off places: The Mount Washington Resort in New Hampshire, the Fountainebleau in Miami Beach. Back then, in the fifties and sixties, these places had what can simply be described as class.

Of course, back then was before the age of mass tourism. People dressed for dinner and flew in those rumbling Lockheed Constellations and Douglas DC-7 aircraft as if dressed for Sunday church services.

These resorts weren't snobby, although they weren't cheap either: but they expected a certain decorum from guests; no raucous behavior at the pool, no flip-flops at dinner, no parading through the lobby in a bikini. Some of them fell into near-ruin but were later lovingly restored. But in their day, management maintained them meticulously and in addition to providing a room and meals, they offered entertainment and activities, the two things that distinguish a mere hotel from a resort, which brings me to one of my favorite resorts in the world, Honolulu's Halekulani on Waikiki.

For a long time I tried to figure out why I liked it so much. I've stayed there five times over the years in various rooms (ocean view, garden view, "Diamond Head view"), sometimes for one night, sometimes longer. I've stayed in other Waikiki "Grand Dames" as well (The Royal Hawaiian for example) but only because the Halekulani was booked solid, as it often is.

The Halekulani is not a chain. Like the places I stayed as a kid, it's a one-off. There's no Halekulani Bora Bora, no Halekulani South Beach. There's no frequent stay program to lure guests, like you'd find at a Westin or Hyatt. They don't need one apparently.

The minute you walk in the lobby you notice the staff uniforms. They're custom-designed, elegant but understated, in neutral colors. Many of the front desk people have been there for decades. It's the same faces year after year. You notice the expanses of marble, the elaborate flower arrangements, the waterfall and calm at the center of a bustling city.

You're escorted to your room where you complete registration. All the rooms are decorated in the same color palette: seven different shades of white: the walls, the louvered doors, the woodwork, the carpets, the bed linens, all designed to not compete with the ocean views. White and blue, blue and white. 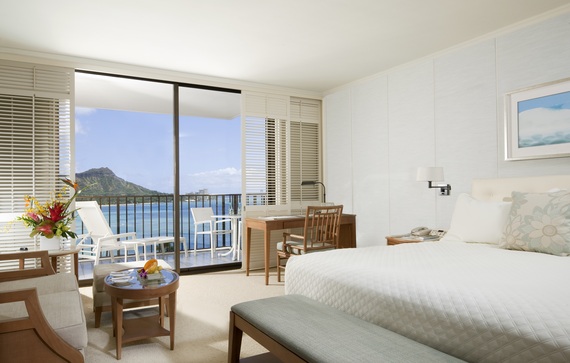 (There really are seven different shades of white in each guest room, which showcase the blue ocean views. And a small placard asks you kindly not to hang towels on the railings)

On my last visit, trying to pinpoint why the place enchanted me so thoroughly, I looked around my room looking for scratches on the woodwork, furniture, walls. There were none. The hotel was last completely renovated in 1983, and again in 2012, but rooms are constantly monitored and updated. The slightest scratch, stain, sign of wear or other imperfection, the general manager, Ulrich Krauer, told me recently, "and the room becomes non-sellable. We take it out of inventory until it's fixed. We have a team dedicated to inspecting room quality every day."

Back to that sense of decorum that's missing elsewhere these days: In the room there's a little brochure telling you about the hotel, and what you can expect from the resort but also what's expected of you. It starts with a sensible dress code, provided in the brochure and on signs posted throughout the resort. It's a throwback to an earlier age. "Your courtesy in maintaining an appropriate standard of dress is appreciated," it reads. During the day, a "hotel bathrobe or coordinating swimsuit cover up is to be worn while going to and from the beach or pool." In the evening, gentlemen are asked to wear a "collared shirt, long pants and covered shoes." At the Orchids restaurant, beachwear, athletic wear, tank tops, t-shirts and rubber beach sandals are a no-no. And in the elegant La Mer restaurant, a long sleeved dress shirt and dress shoes will get you served. Perhaps it's because the resort is owned by a Japanese company, and the Japanese are known for formality, but I think it's more than that.

"We might offend a few guests now and then with our standards, which we have relaxed a bit over the years," Krauer admitted. "But we don't want to see your toes at dinner. We want to preserve the serenity."

Sound archaic in this age of athleisure wear? So be it. There are other places to stay on Waikiki. 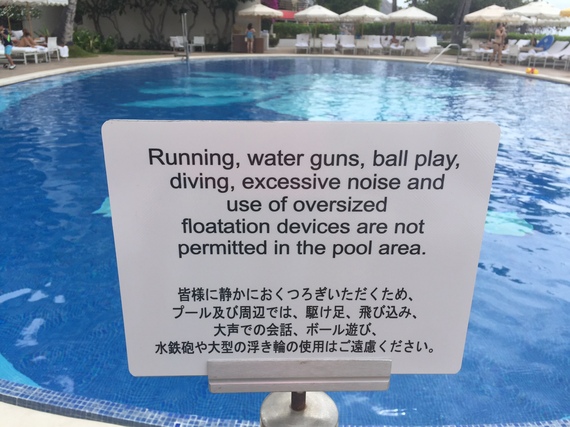 (Let's keep everything civil, shall we?)

At the pool, a sign in both English and Japanese reads "Running, water guns, ball play, diving, and excessive noise" are not permitted. Yay, I say. I stayed recently at the Travaasa Resort in Hana, Maui, where there was once a pool reserved for adults only (there's a perfectly nice one for kids on the property as well) but management decided to relax its standards. On my last stay, a herd of screaming children jumping in and out of the formerly adults-only pool, splashing me and my book from time to time, made it impossible to relax, forcing me back to my cottage. I won't be going back until they once again cater to all guests or at least provide a few hours each day when the pool is serene.

Its history goes back a long way. In 1883, businessman Robert Lewers built a house on land now occupied by the resort's main building, which itself dates from 1932. In 1907, Lewers leased his house to a journalist who converted it to a small hotel. Ten years later, or 100 years ago, new entrepreneurs expanded the property to a 21-room guest house and named it Halekulani, or "house befitting heaven", in the 1930s expanding it to 115 rooms and hosting celebrities such as Clark Gable and Rosalind Russell (who still come today: Bette Midler, Nicholas Cage, Yo-Yo Ma), even an Apollo astronaut who once commented, "I thought I'd already been to 'heaven,' until I came to Halekulani."

Now, a century later, there are 453 guest rooms and suites on five acres.

Clean, pristine, not busy. Elegant but simple and luxurious. You'll find me sitting on a chaise by the large oval swimming pool with a mosaic made of over a million glass tiles, while a pool attendant passes out treats, towels and water. Speaking of service, among the resort's 700 employees over 100 have been with Halekulani more than 30 years.

And there is nothing more serene than in the evening sipping a cocktail, being serenaded by the Halekulani's resident musicians as they sing to traditional Hawaiian music accompanied by famous hula dancers, listening to the ocean waves breaking on the sand. Heaven indeed.