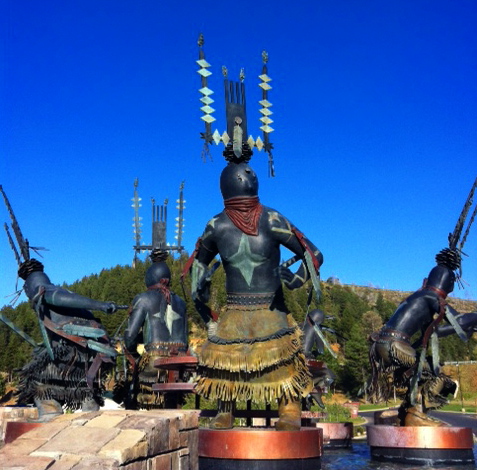 There is something special about a road trip that captures the spirit of a true journey like no other mode of transportation. That was my thought Monday night as my two German partners, Alex and Thure, and I loaded up our SUV with gifts, recording equipment and lots of food and water, to head east on Interstate 10. We were about to make a 900-mile journey from Southern California to Alamogordo, New Mexico, where I was invited to be part of the "Honor Your Life" program at the Mescalero Apache School on the Apache reservation. The Honor Your Life program was created to help the Apache youth cope with depression, suicide, domestic violence and other extremely difficult life challenges.

I had been planning this trip for months, as I've mentioned in a previous blog; but now we were actually on our way, driving through the desert in the middle of the night. The air smelled of smoke from the fires raging in the Southwest, but foremost in my mind was my excitement to see my friends and family on the reservation. Whenever I make a trip to the Apache rez, it is their love that always leaves me humbled. 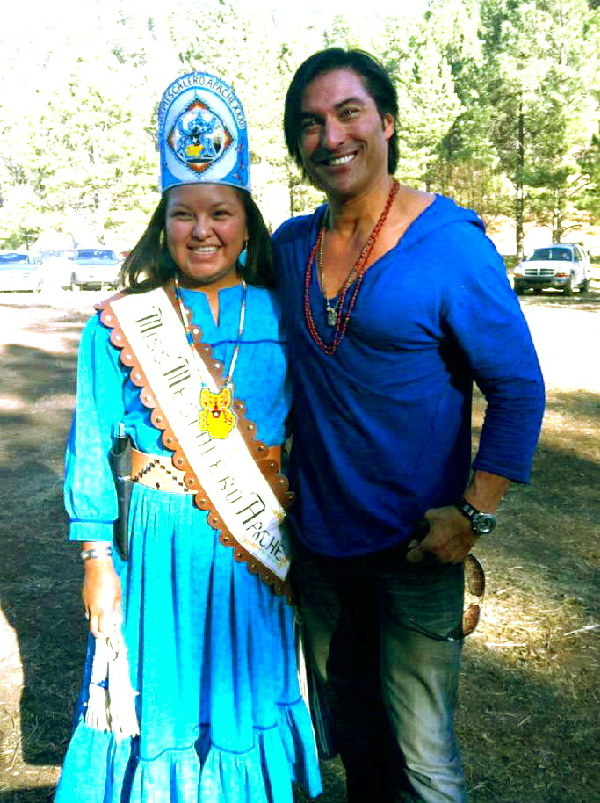 The long drive wore on through the night, but eventually we saw the sun rise over Arizona and the mountains came alive before us. After a total of 14 hours, we arrived at the Inn of the Mountain Gods, a beautiful Casino resort situated at the heart of Alamogordo, high up (7600-feet elevation, where we were) in the densely forested mountains of Mescalero Apache country.

Our work began the next day early as we arrived at the Mescalero Apache School to be greeted by my dear friend who is like family me, Janice Merino. Over 60 kids from the neighboring areas as well as local kids were taking part in a four-day event led by Clayton Small, Ph.D. of the Cheyenne Nation, and his program, Native Hope. Native Hope travels to many reservations throughout the country where they use humor and interactive exercises to "help young people use their strengths to break unhealthy multi-generational cycles within families and communities."

The Apache youth who participated were from all three bands of Apache who reside in New Mexico -- Lipan, Chirichua and Mescalero. Many of the facilitators were young Apache men and women who volunteered their time to the program. Miss Mescalero Apache, Krystin Rae Fernando (aka "Chico"), was also there, gracing us with her amazing positive attitude, gorgeous smile and overall joyful presence. 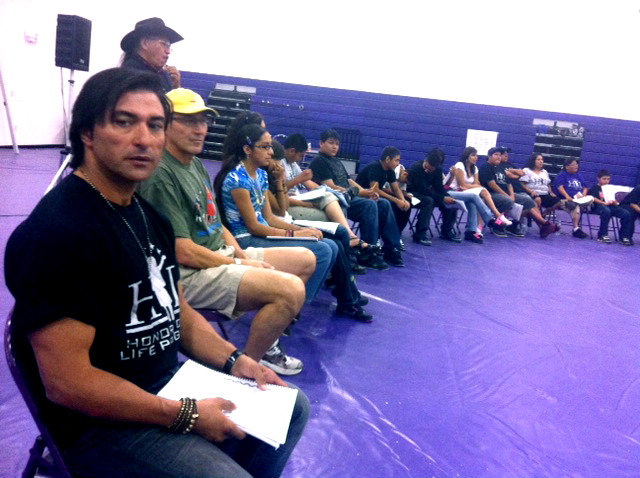 As I sat in the circle listening to the stories each person shared, I could not help but be moved, for each Apache who was present had been affected, or knew someone who had been affected, by suicide, abuse or neglect of some sort. With each visit to the reservation I can tell how the kids are coping just by the look on their faces. I have watched some of these kids grow up over the last decade. It was great to see Twyla, whose "feast" (Apache coming of age ceremony) I attended half a decade ago, now all grown up helping the other kids with their issues. She was recognized as MVP among all the facilitators. I am so proud of you, Twyla.

It takes a lot of courage to share about a time when you were not at your best, made bad choices in your life or put up with abuse in a rotten relationship. Each person who stood center stage to share their stories was supported by their friends and family who stood behind them. A young mother told how she finally escaped abuse at the hands of her alcoholic husband. A father told how he discovered his adult son dead from a violent suicide after being rejected by his girlfriend. A young girl shared her years of sexual abuse by a neighbor while her single mom was sitting at home intoxicated. 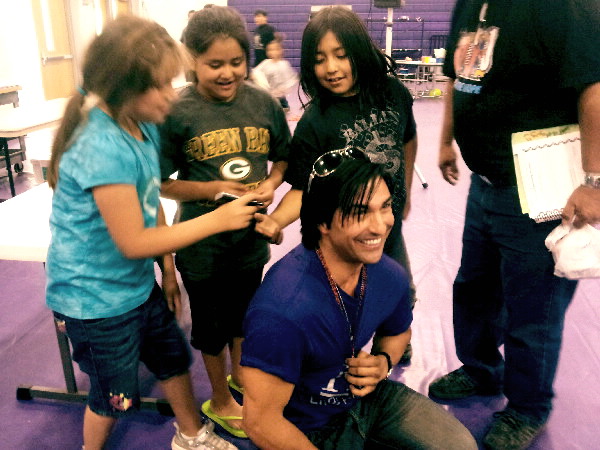 We also need to realize people who are successful today may have endured their share of troubled times. Several of the facilitators shared their tragic stories too. Among those who shared were Debi Martinez and Oliver Enjady. Debi is an ex-judge for the Mescalero Apache Nation and a direct decedent of the great Chiricahau Chief, Cochise. She is an amazing woman who does invaluable work on behalf of her Apache Nation. And Oliver recently finished working on summer blockbuster movie Cowboys and Aliens as the Apache advisor and linguistics expert. I had the honor of working with him on the Apache dialect voice over for this film. 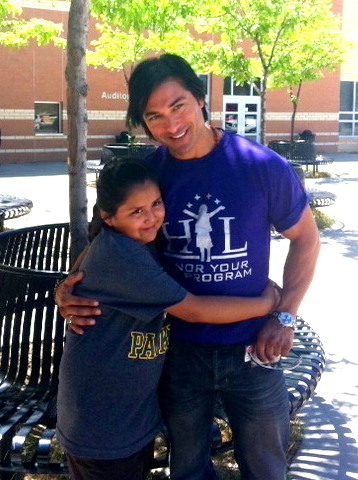 The week my German friends and I spent on the reservation was packed full of moving experiences, but the most moving moment for me was when a young man took me aside to tell me he had been a meth addict for a while. The night before, the devil, in the shape of his drug dealer, had knocked on his door; but the young man sent him away telling him never to return. He gave me a hug and thanked me; he claimed my words had been echoing in his mind -- "stay strong." So he did.

The Apache are great hosts, like most American Indians. They invited us to go deep into the mountains to witness an Apache Feast where I was invited to sit with the medicine singers and drummers as the Apache crown dancers danced around the fire into the early morning lights. I was pleased that Alexander van Bubenheim -- acclaimed composer, musician and producing partner on our upcoming musical album, Tears Of A Shaman -- met my people and was able to record some talented Apache performers for the album. My new friend, wonderful actor and filmmaker Thure Riefenstein, used his film expertise to help us respectfully capture the spirit of the events we were privileged to witness.

The Apache people never let us forget how grateful they were that we all had made the effort to come help with the Honor Your Life program. But the honor and the privilege was truly ours. The program has been a success -- there were no suicides last year! But Honor Your Life still needs funding in the coming year. I intend to help it continue. 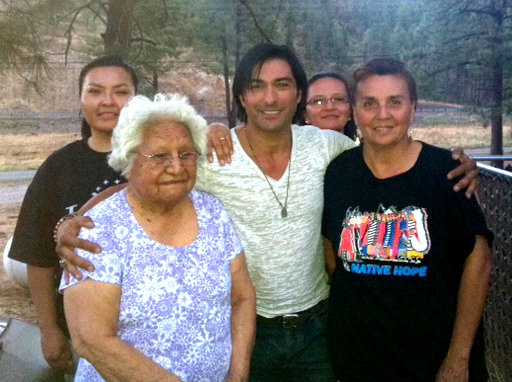 I wish I could tell you about everyone I have become friends with on the reservation, but the one I must not neglect is Elbys Hugar. Elbys is the great-granddaughter of Chiricahua Apache Chiefe Coshise and she is a truly remarkable woman. She co-authored the first Mescalero Apache Dictionary and was hired by Ron Howard to be the linguistics experts for his riveting movie, The Missing. Elbys and her family have become the Chirichahua Apache family I never had. Long ago, she honored me by naming me E'nalsh D'in, which means "He who remembers the past." This is an honor I will treasure all my life. Leaving Elbys is never easy for me, but I remind myself, the Apache never say goodbye. We say "N'an Dols t'ath," or "See you again..." 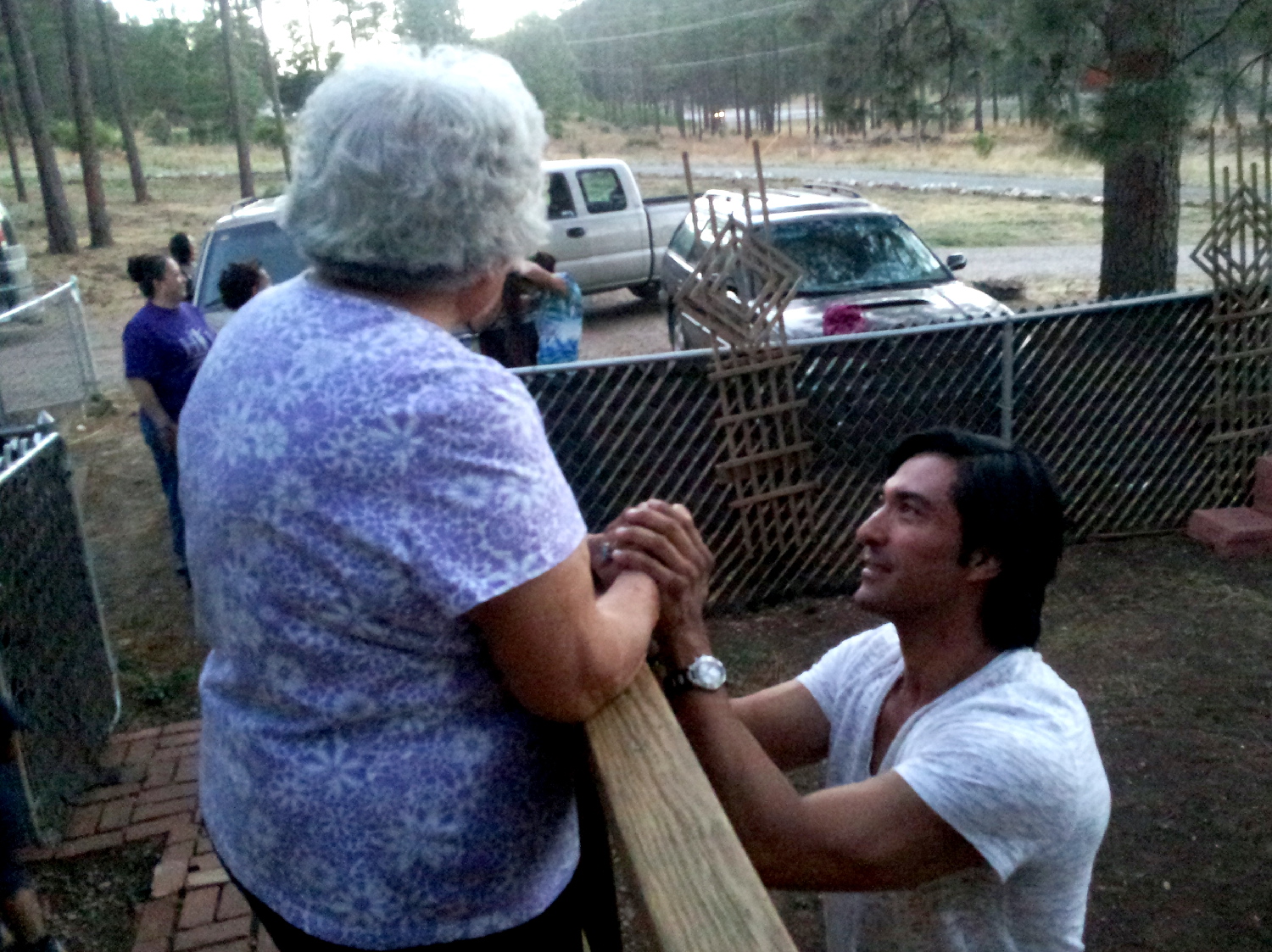 We left the Mescalero Apache rez on Friday, but our adventure was not over. The massive Arizona/New Mexico fire was not on our minds during our time on the reservation. But when we reached the interstate border we were met by an fast advancing wall of fire; the highways were closed and emergency personnel told us to make a very quick retreat! We must either go south through Mexico or go north through Albuquerque. With two Germans on board, we decided it was best to stay in the United States, so we went north. As we backtracked to the long detour route, we saw firefighters battling countless hot spots on either side of the road. We felt lucky that we did not have to abandon our vehicle like some of our fellow road travelers who we saw walking through the smoke along the highway. 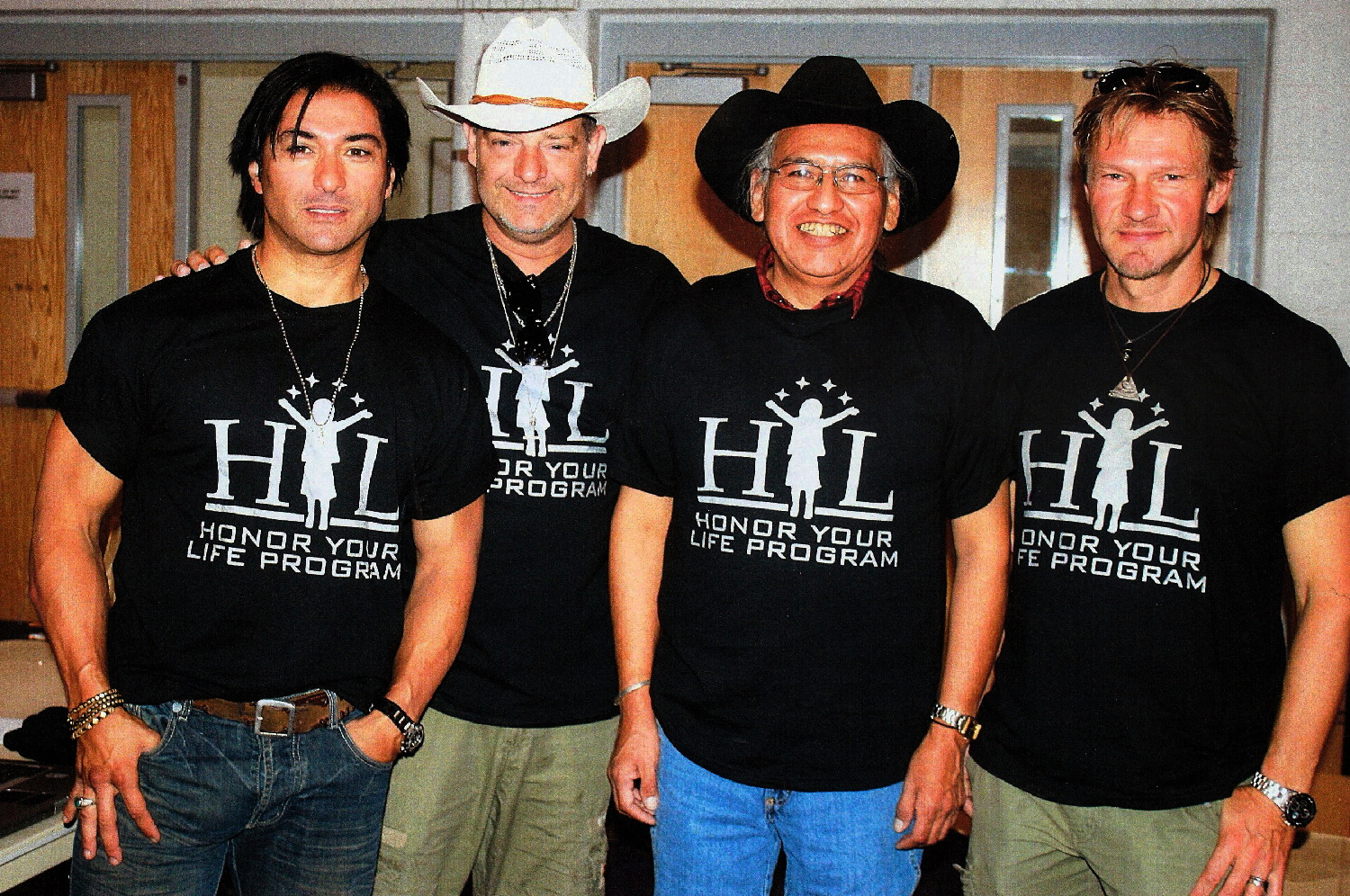 In all, we traveled 18 hours and more than 1400 miles to reach L.A. It was unnerving, but through this brief crisis, I was able to understand that this was a minor challenge compared to what the Apache have faced during most of their history. The Apache are people of great strength and endurance; they have survived it all despite the odds. This is what I reminded the kids in my final speech to them: Tough times don't last... Tough people do!

Photos credits, from top to bottom:All photos used by permission as noted.
Download
Calling all HuffPost superfans!
Sign up for membership to become a founding member and help shape HuffPost's next chapter
Join HuffPost