Honore Daumier, the brilliant satirical artist of 19th century France, was the master of caricature. His remarkably observant eye fixed on the foibles and flaws of his fellows. No one and no behavior escaped his attention -- neither the common man, the bourgeois, or the aristocrat. From his jaundiced vantage point he portrayed the idiosyncrasies of lawyers, bankers, artists, and politicians. Especially politicians. For Daumier was an engaged yet always skeptical participant-observer in the political trials that wracked France throughout his lifetime. Faithful to the ideals of the Republic, possessing strong egalitarian instincts, and with finely honed sensitivity to whatever was phony and contrived, Daumier relished skewering the pretentious and the self-important. He did not spare those in public life who were, nominally at least. on his side of the great ideological divide. 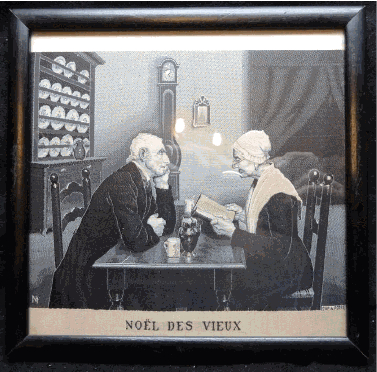 In this respect, he personified the type of French skepticism that is rooted in ideals yet unwilling to set aside the critical mind for the sake of partisan advantage. That tradition survives in contemporary France however muted and dulled.

Humanism was Daumier's distinguishing characteristic. He viewed all through that lens: victim and perpetrator, the prosaic and the exalted, losers and winners. None could escape the human condition, that overarching reality of which he was always acutely aware. Strikingly, he depicted little of outright evil or maliciousness or brutality. This despite powerful feelings about injustice, exploitation and the ravages of war. The messages of his drawings are as sharply etched as the images themselves. But they stress the obtuse, the vain, the presumptuousness, the self-serving aspects of the persons and actions he depicts -- however pernicious the effects of their actions. Vanity being the most characteristic flaw of the French, it is not surprising that it recurs most frequently in his art. 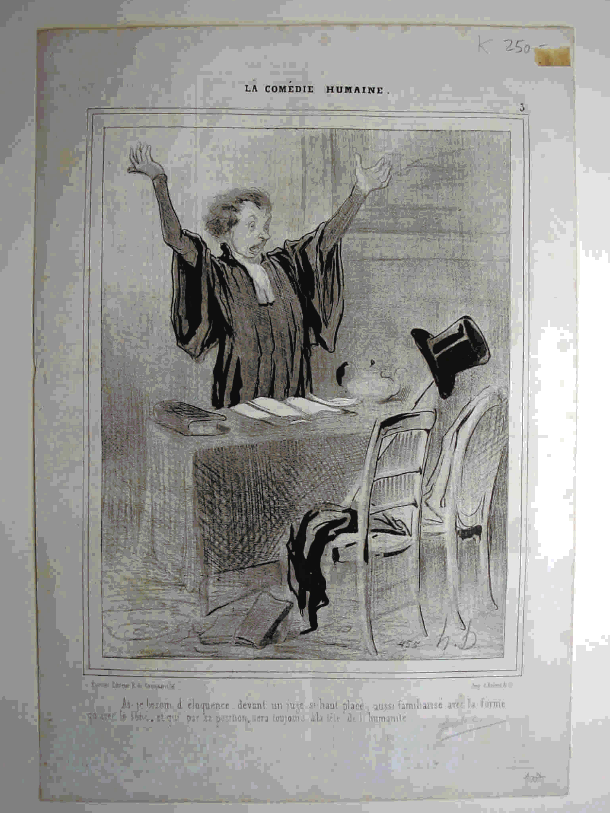 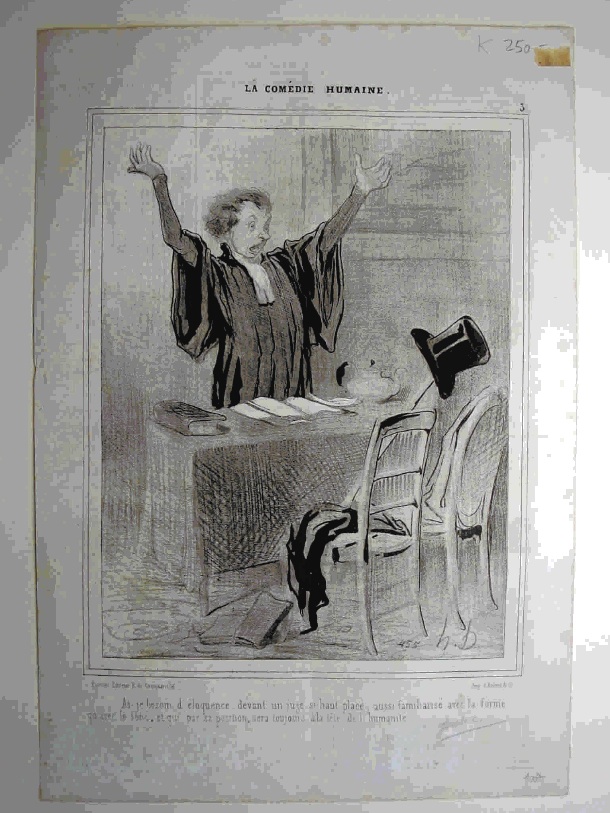 Daumier was a deep skeptic but not a cynic. He found much humanity in the daily pursuits and pastimes of his more private subjects. The convivial game of cards, the companionable drink, the affection for children -- they were imbued with an evident warmth even if he often added a certain edge to them. Domestic life, the subject of hundreds of drawings that formed a defined theme of his work, best characterized this blend of decent human feeling and the frisson of all social life which constantly accompanied it. Still, some are touching; indeed, touching despite Daumier's lack of personal empathy with the subjects. An excellent example is his sketch Noel Des Vieux wherein any elderly couple sit across a simple table from each other, strict in appearance, and together savoring in rapt attention a reading from what seemingly is either Scripture or an uplifting bit of spirituality. This clearly is not Daumier the free-thinker, the semi-Bohemian, the doubter, the man who never could quite still his self-scrutiny. It does convey, however, the genuineness of the moment. To each his own; we are all coping as best we can. That could be his motto. 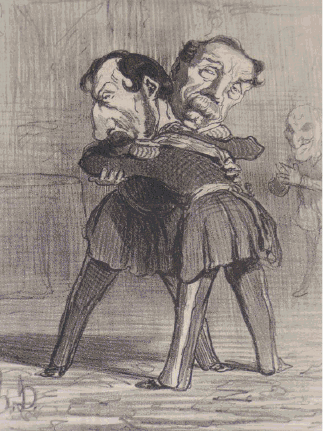 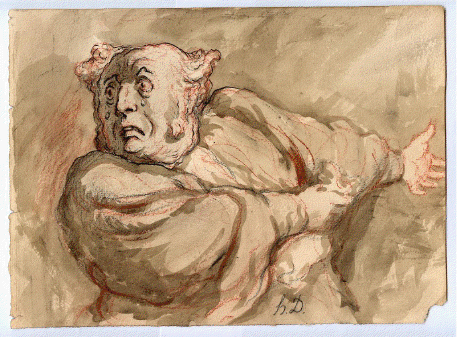 Daumier was a man of exceptional character, craft and perception of the human condition. Very much part of his times as evident in the topicality of his art, he nevertheless transcends them -- his enduring appeal so testifies. He has yet to be surpassed, equaled only occasionally by PUNCH humorous sketches of the late 19th century. Today, there are no aspirants who even strive to probe the depths that he explored, much less anyone with matching skill. There are readily identifiable reasons for that. For one thing, it is a daunting challenge to satirize living satire. How can one render the office seeker who lets it be known that he is about to 'reinvent' himself as warm and cuddly? What can one add to the campaign strategist who boasts that "we are not going to let facts get in the way of our strategy?" Or bankrupt CITI Corp putting its name boldly on a baseball stadium for the ever choking Mets which is popularly known as Sub Prime Park?

True, some antics of our high and mighty lend themselves to visual caricature, as do our fads and fashions. The fact that the persons involved appear oblivious to their absurdities does create an opening: Sarah Palin and her literally on hand notes; Rick Perry's theme park cowboy act; Hillary's relentless quest for the frequent flyer record punctuated by hair styles as numerous as the 100+ places she's parachuted into. Or, at the pedestrian level, the super macho drivers (of both sexes) steering ruggedly non-individualistic SUVs while babbling on iPad about nothing. The problem for the would-be satirist is that these images have become so ingrained in our unconscious sense of the normal that it is near impossible to make the point of how ridiculous they are through exaggeration or caricature alone. Daumier's light touch cannot do the job. To make the point, one must explain -- and that means words. A quite different form of satirical commentary.

Daumier was not a man of words. Highly intelligent, he lacked the gift of verbal fluency. Indeed, he commented on how deprived he felt at what he saw as an inability to keep up with the thrust and parry that marked the animated conversations among friends and colleagues. This self-awareness stood in sharp contrast to the conceit if not always assertiveness that seems a natural complement to so many great artists in every age. Oddly, literary matters were an integral part of his background. Daumier's father was a poet by avocation and vocation. Attaining only modest critical success, he was the recipient of unstinting and sustained financial largesse from a wealthy patron for decades. Born and raised in a world of words, Daumier instead was drawn to the brush, the pencil, the drawing board and the canvass.
Daumier would be hard pressed to find his footing in today's world. For in additional to the challenge of outdoing living satire, there is the absence of ethical and aesthetic vantage points from which to comment with humor, biting or gentle, about his fellows Daumier prized the authentic above all else. His reacted with instinctive revulsion at artifice of all kinds. Those feelings that arose from his very soul, and filtered through an acute mind, pervade his work. They dominate in particular his portrayals of public men among whom he found so little of the natural and an over-abundance of contrivance.

Daumier in contemporary America perhaps could have had a field day; but more likely its fatuousness would have overwhelmed even his singular talents.