His son, Ron, and I were close friends after Vietnam. Alan Klemp was my friend's dad...the guy whose hand you shook and said, "Nice to see you again, Sir." I knew he'd been in WWII and that's all I knew.  When he found out I was a Vietnam vet it was as if I suddenly spoke a language that he knew.  That particular war had been seen as it unfolded, almost in real time, on television. For the first time millions of Americans saw war up close.  Maybe he knew I'd seen some of what he'd seen. From then on he talked easily to me about his experiences, lapsing into a new story every time I saw him.

Mr. Klemp had been a Marine stationed in the Pacific.  He'd seen combat on Guadalcanal, Tarawa, Tinian and Saipan. Places that I'd only read about in U.S. History.  He'd come under friendly fire and lived through malaria and dengue fever; he'd lain dehydrated on a beach where a mortar shell landed so close to him it lifted him off the ground.  In the heat and high humidity, he'd snagged a case of iced pineapple to take back to his buddies.  The stories tumbled out of him as each memory opened up another.

Two things stood out for me.  First, his experience of anti-Semitism in basic training.  This is not to suggest that every drill instructor or fellow recruit maligned him. But here's the thing: it only takes one. It had happened to him several times throughout his military service. It's nothing short of shocking to hear him tell about it now.

The second thing would have been easy to miss.  After his stories of being a Marine, he talked about getting married, being recognized for his service at a special event.  He spoke of a photograph that had been taken of him and some of the Marines he served with in the South Pacific.  Certain ones he knew had been killed in combat or had died later.  But there were those whom he could not find, and he wanted the photograph to go viral so the families of those men could see them. 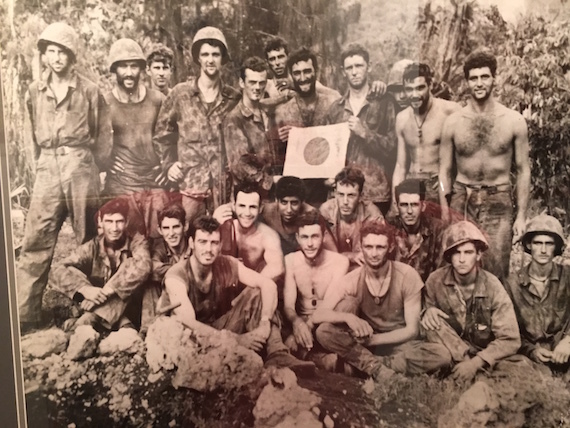 Alan Klemp is in the second row on the end at the right. The photo was taken right before they were called back to Guadalcanal.

Afterward, he'd been assigned to accompany soldiers who had gone AWOL to prison in Idaho.  Explaining how he got this detail, he said simply, eyes downcast, "I was having some trouble with my nerves." And that's all he said.  I knew immediately what he meant. I thought of all of us who have seen combat or been close to those who have.  We know now to call it PTSD. But when Alan Klemp and men of his generation came home, there was no language for it.  No understanding, really. Nobody wanted to talk about it.  So for years he didn't. He barely mentioned it in a long, recent interview.  That's how unacceptable it was.

A lot's changed since then, but what hasn't changed is how the experience of war changes lives. 22 suicides a day.  Some of them are our older vets; that's a lifetime of suffering.  They deserve better.  They deserve to be heard and to be offered whatever will help them h eal. As they heal, the nation heals and becomes stronger. If you know a veteran who needs help, here's our LifeLine for Vets crisis number: 888.777.4443. It's the only one of its kind...vets talking to vets. And that's what made the difference to this WWII Marine who finally talks about his experiences.

Alan Klemp, who served his country with honor and valor, turned 95 a few weeks ago. He says he's been blessed, and feels nothing but gratitude for the life he's lived.  Happy birthday, Al.  And welcome home.